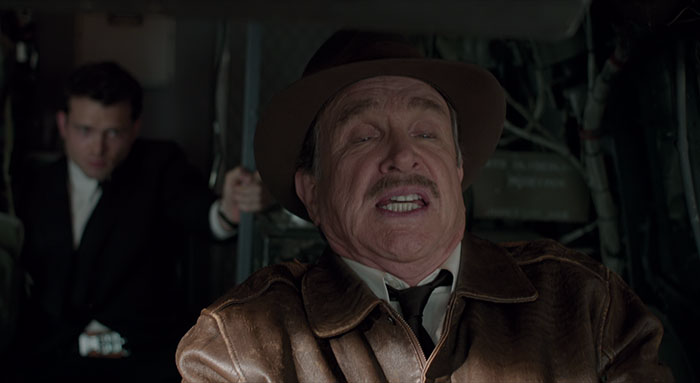 by Walter Chaw The title refers to Howard Hughes, I think, and becomes a song its ingénue sings a couple of times over the course of the film. Moreover, it refers to Warren Beatty at this point in an extraordinary career that began in the New American Cinema and that wave of Method actors filling in the spaces left behind by the Golden Age. He was impossibly beautiful, and played against it whenever he could. He was whip-smart. Unabashedly political. Unapologetically a legendary philanderer who made perhaps his greatest single impression on my generation with a surprise cameo in then-girlfriend Madonna's documentary monument to herself, Truth or Dare. Any investigation, though, finds that Beatty is a definitive voice of a definitive moment in the cinematic history of the United States. It's been fifteen years since his last film as an actor, twenty as a director. In the meantime: rumours and speculation about this long-gestating production--his dream project, the culmination of a storied career behind and in front of the camera. And now here it is, Rules Don't Apply, and it's exceedingly uncomfortable, a film that leaves Beatty, acting here as co-star, director, producer, and credited screenwriter, exceptionally vulnerable. As capstones go, it's an interesting one.

Interesting, alas, doesn't mean conventionally entertaining, and Rules Don't Apply isn't entertaining. It's uncomfortable. Some films are uncomfortable in a useful way; this isn't that kind of uncomfortable. It's also unwatchable at times and excruciating throughout. It's atrociously-edited, though Beatty is at a place where the sometimes-comical choppiness might be seen as an auteur statement, or at least a "Fuck you, I'm Warren Beatty." Whatever it is, it's distracting. There are two moments that look as if they've been frozen, stepped backwards, then stepped forwards like a cat in a litter commercial, doing something cats don't ordinarily do. One could argue that this is Beatty reminding he's lord and master of this film in which he's playing the lord and master. (Perhaps literally the Lord, but more on that in a minute.) On the other hand, it's shockingly amateurish and makes an already difficult-to-appreciate movie that much harder to defend. It's not unlike the pivotal scene in Beatty's Bulworth where the titular senator, played by Beatty, has a nervous breakdown while speaking and accidentally starts telling the truth.

Ostensibly, Rules Don't Apply is about fresh-faced Marla Mabrey (Lily Collins), who arrives in Hollywood at the behest of reclusive billionaire Howard Hughes (Beatty) to join his stable of starlets hoping to be the Next Big Thing. Her driver is Frank (Alden Ehrenreich), a devout Methodist from Bumfuck, Somewhere who's jokingly "forgiven" by Marla's mom (Annette Bening) for not being devout Baptists like they are. There's an intriguing moment when Frank first picks them up where he mistakes Bening for the ingénue before the shockingly young-looking Marla announces herself. Collins, who's 27, looks 12, making her dalliance with Beatty (79 here) more disturbing than the disturbing May-to-next-December relationship between Audrey Hepburn and Gary Cooper in Love in the Afternoon--but, more importantly, making the romance between Collins and Ehrenreich (also 27) somehow gross, too. The pair's ossified comedy routines don't help, nor does the stilted, petrified slapstick that has Marla breaking vases and Ehrenreich ejaculating in his pants. As a romantic comedy, in other words, it's menacing at best, disgusting for the balance. Although it's tempting to blame Collins and Ehrenreich, I'm not sure anyone could adequately say the things they're asked to say.

But Rules Don't Apply should be read as the Beatty Manifesto, the maybe-final statement of a guy who is essentially a deity in a culture that tends to deify certain levels of celebrity. At his peak, he was both popular with the masses and revered by critics. Famously, Beatty even lured sharp, indelicate Pauline Kael to Hollywood to be a consultant on his and James Toback's projects. His pull was rare. More, his way with the ladies has become mythological and epic. So here's this film where he plays Hughes as something like an endlessly-delighted, sexual Chauncey Gardiner, keeping a harem of up-and-comers on call and a staff of handlers in perpetual limbo. He's the centre of this universe, and it's not for nothing that the leads are religious zealots who say Grace before meals at the studio commissary. The story of Rules Don't Apply is the story of their expulsion from Eden. Taken as a loss of their innocence, the film as a discomfort machine makes some sense. Taken as an allegory for a powerful man who doesn't entirely understand the scope of his power and its consequences, the picture's disregard for coherence and narrative linearity make some sense as well.

What's fascinating about Rules Don't Apply, ultimately, is the insight Beatty, as the mad Hughes, allows into his psyche. Consider the sequence where Hughes pilots a DC-3 recklessly, singing an old Al Jolson tune as he remembers the night Jolson followed Enrico Caruso and made the absolute best of it. For the bulk of it, Beatty holds Frank's blanched, possibly nauseated, definitely horrified expression in close-up. Afterwards, Frank tenders his resignation, but it doesn't take. The scene is essentially one in which Beatty expresses that he's in control, though possibly he shouldn't be; and that he doesn't blame anyone for thinking he shouldn't be, either, because who gave him the goddamn controls in the first place? He plays Hughes for maximum amused cupidity. He's appalled. He has trouble remembering names. People want things from him and it's hard not to be paranoid. The temptation towards isolation is huge. He asks often about other people's fathers, which plays into reading it as a film about God. Better, it plays into the idea that Rules Don't Apply is essentially about the madness of rules not applying for Hughes, nor for Beatty. It's an intensely personal picture. That's its greatest strength, along with its greatest weakness. It may not be for anyone else. When Beatty passes away and leaves behind this most challenging and brilliant of careers, we'll be glad we have it. Originally published: November 24, 2016. 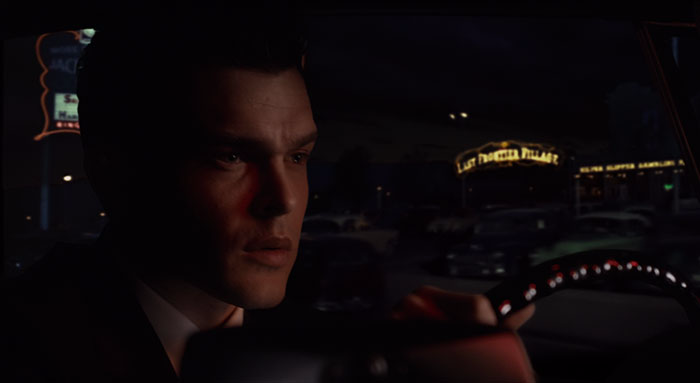 THE BLU-RAY DISC
by Bill Chambers Rules Don't Apply's 1.85:1, 1080p Blu-ray transfer is a breathtaking showcase for Caleb Deschanel's cinematography--digitally captured with the ARRI Alexa, but cinematic in its aims. Several scenes are purposefully underlit--Howard Hughes preferred the dark, like a vampire--and the image behaves like film, artfully exposing silhouettes rather than everything, dimly. (In an auteur hallmark, the light will often fall just so across Warren Beatty's face.) This is an old-fashioned glamour movie where the focusing diffuseness intensifies depending on whether Beatty or a girl is in the frame, but the base level of detail always impresses, and the period wardrobe and props have a nostalgia-inducing tactility. Though Deschanel and Beatty have eschewed faux-grain, the cleanliness of the image by no means cheapens it. I will say that the stock-footage inserts, sometimes used as rear-projection plates, are no less conspicuous on the small screen, blown-out and Kodachrome-coloured as they are. It's a too-cute stylistic quirk that better suits the frothy movie in Beatty's head than the leaden one he actually made. The attendant 5.1 DTS-HD MA track reproduces an idiosyncratic mix with pinprick clarity. Some of Beatty's choices--the abrupt music fades, the curious lack of ambient noise (perhaps to convey the sterility of Hughes's environment)--are Michael Mann-esque, but when Hughes whips out a saxophone and starts playing it in a dinky hotel room, it sounds staggeringly 'live.' The period songs have a nice spread across the front channels, while the scene where Hughes takes control of a plane proves the surrounds and subwoofer are still working.

The disc's only substantial supplement is a surprisingly edifying talking-heads doc, "This Is Rules Don't Apply" (21 mins., HD), in which the principals reflect on the rare experience of working with Beatty--except Beatty, of course, who talks about his cast and crew. He says Alden Ehrenreich insisted on reading for him despite being guaranteed the role and remembers realizing after a couple of run-throughs during this informal audition that he was the one seeking guidance and approval from Ehrenreich. Annette Bening has only praise for her husband as a director, adding that it was quite something to witness his long-gestating dream project come to fruition. That there isn't more about the production's tortured evolution is the only real drawback to this piece--well, that, plus the fact that the dynamic range of the video switches on a dime throughout, as if during the mastering someone kept toggling the HDR. Capping the extras: Lily Collins performs the lovely title song over a trailer-like truncation of the film (2 mins., HD); and a gallery of production stills offers manual or slideshow viewing options. Trailers for Hidden Figures, Papa Hemingway in Cuba, and Rules Don't Apply itself round out the platter, part of a combo pack that includes DVD and digital copies of the film. 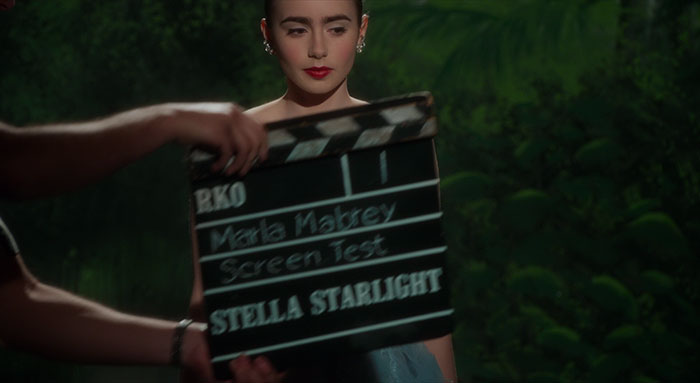