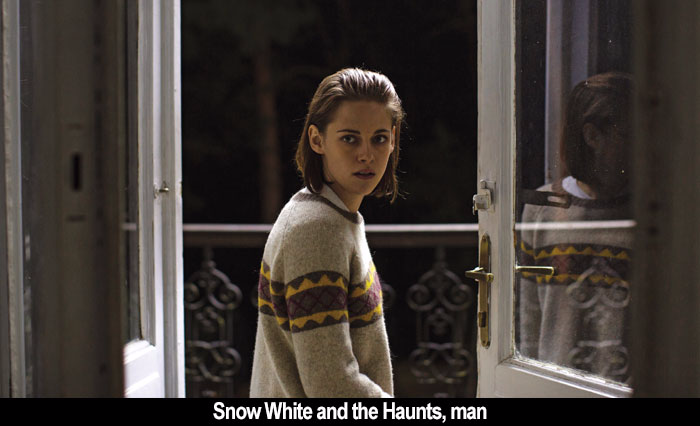 by Walter Chaw There's a brilliant song by Patty Griffin called "Every Little Bit" that, among other piquant turns of phrase, includes the lyric "I still don't blame you for leaving, baby, it's called living with ghosts." At around the 30-minute mark of Olivier Assayas's Personal Shopper, our survivor Maureen (Kristen Stewart) tells a confidante she had made a vow with her late twin brother to make contact from beyond the grave should one pre-decease the other. "And then?" he asks. "I guess I'll live my life and let it go." Then a long, gliding shot of Maureen riding her moped through the Parisian nighttime scored to simple, haunted strings that are augmented towards the end of the sequence by percussion, which reveals itself to be a pencil against parchment. Maureen works as a personal shopper for a German fashionista who never seems to be home. In her off moments, she helps her brother's "widowed" girlfriend Lara (Sigrid Bouaziz) try to suss out if his ghost is unquiet and lurking in the house they shared. Maureen's a medium, you see, or at least she and her brother played at being mediums--a morbid pastime informed by a heart ailment, unpredictably mortal, shared by the siblings. A doctor warns her against any strenuous activities or emotions. She'll suffer both before the end.

Personal Shopper is about living with ghosts and the suggestion that we do so because we, ourselves, are ephemeral and given to ritualistic hauntings and unacted-upon desires. Maureen never sees the person she's working for. The longest dialogue exchanges in the film come in texts between Maureen and "Unknown" (to her, to us). Initially wary, this nameless correspondent becomes her confessor by the end. It's only natural: she doesn't have anyone else. The conversations she has with her boyfriend are over Skype; they're separated by continents. "I'm coming down to see you," she whispers to him one night, and it's as sepulchral as the interactions she has sometimes with ghosts. "You're not my brother," she tells one spirit. And it isn't. Asking for a sign, a faucet turns on in an abandoned home. "I need more from you," Maureen says, and it's punctuated by the little pops and sibilance remembered from your parents talking late at night in the next room. It's both intimate and distant, and the picture deals with that tension between closeness and detachment. Breaking a taboo, out of boredom and the desire for feeling, Maureen spends an evening--in a scene that mirrors the key sequence in Pablo Larrain's Jackie--walking through her employer's house, drinking, listening to Marlene Dietrich's song about planing as a metaphor for the egalitarianism of death, trying on the boss's clothes and masturbating herself to sleep. "I feel ashamed," she confesses to her disembodied, digital confidante. "Didn't you want to be someone else?" asks the unknown.

Personal Shopper is also about confronting the notion that there is no unifying principle holding the world together--the only thing that gives meaning is the perversion of individual gestalt perception. There's meaning because we demand it and impose it upon the meaningless. The great irony of Assayas's films is that they invite these attempts to tease some traditional order from them when they are best read as essays about why such attempts are futile. There is no narrative to assemble; the puzzle is that we think there's a puzzle. I love that Kristen Stewart's character in her last collaboration with Assayas, The Clouds of Sils Maria (where she played another accoutrement to another powerful woman), vanishes to reappear, perhaps, in this movie's Paris. I recognize that I love Personal Shopper for the mystery it builds not intratextually, but intertextually. There is a larger play in Assayas's work. I'm wondering if each film is a microcosm of a continuing conversation about function as identity, action as meaning, language as mythology. The picture places Assayas in the company of Godard--especially in its final sequence/shot, which is as curious, as grave and terrifying, as anything in the Nouvelle Vague. It's a challenge to the audience to become introspective. At the end of what is essentially an existentialist horror film (aren't all the good ones?), Personal Shopper is suddenly a treatise on Gilles Deleuze's ideas about transcendental empiricism.

In practice, Personal Shopper is just time spent with a young woman who's struggling to fill the void left by the death of her twin. She wanders through her day-to-day. She tries to say and do the right things. She does her job but doesn't take much pleasure in it...or in anything, it seems. She has desires that are forbidden, she confesses, but the extent of that appears to be small transgressions she immediately regrets. Exciting things happens around her, but she's generally a spectator. Each time she's the unifying agent, the film that's playing like an arthouse project suddenly becomes a horror movie. Maureen's living in one reality, in other words, but existing in another. There's an elegant wisdom to that idea. Stewart is fantastic in a role that was written for her. She's as much the cipher and object as Scarlett Johansson's unnamed alien from Under the Skin. Her arc is similar as well: she gains knowledge of good and evil, and for her sins is expelled from Eden. Personal Shopper is a conversation with a person who's smarter than you and has spent some time contemplating that which we generally avoid thinking about. It's about living in a world that doesn't care about you and the sad, desperate things we do to pretend it does.