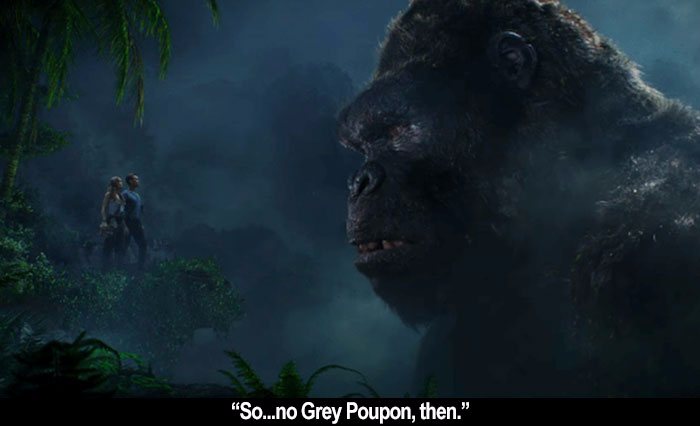 The basic outline of the King Kong story through history is that white slavers/colonialists visit deepest, darkest Other-ville and use a honey-pot white girl to lure a giant gorilla into chains and back to New York, where he gets murdered by a bunch of white people. The Merian C. Cooper version (1933) played long on the savages and Kong's connection to them (my favourite bit is when Kong runs his finger down Fay Wray, then sniffs it), while the John Guillermin remake (1976) played heavy on the bestiality with a turned-out Jessica Lange. The oft-derided Peter Jackson version (2005) cast Kong as a brooding romantic, lured, perhaps knowingly, to his death, though not before a magical moment on a frozen pond. For the record, I love Jackson's romanticized vision of masculinity. His Kong is Byron in a hair suit, and the film presents the most sympathetic version of the monster. (And takes its time doing it.) It's the first Kong movie to take ownership of its text and find a conversation worth having about men and women. Its inamorata, Ann (Naomi Watts), is a literal idealized effigy. She's something on a stage: a keepsake. Kong can never have her, of course, only cherish her image--and image is, tragically, what Ann's all about. Not for nothing was Jackson's film the product of two women screenwriters: It gets that men destroy what they idealize and, sometimes, bless them, they're destroyed instead. Nobody wins in cautionary tales.

Jordan Vogt-Roberts's Kong: Skull Island gives Kong a brooding superhero backstory in which his parents have been killed by a joker-faced lizard thing, leaving him the broken protector of his own private Gotham. There's some Vietnam hokey-pokey in which it's implied that one shouldn't introduce military might into a jungle environment, lest one get a primal comeuppance; but it's safe to ignore that. There's much made of going "upriver" that might have Apocalypse Now fans nudging each other knowingly (ditto that the main human good guy is named "Conrad" (Tom Hiddleston)), but the film is not so much an examination of a heart of darkness as it is a lot of exhausted blather holding together the money shots. Like porn, n'est-ce pas? It's also nihilistic in the extreme, completely hopeless about mankind--and because it's a prequel to films in which Kong gets lured to his death by a different white girl, hopeless about Kong's chances as well. The girl this time is photojournalist Mason Weaver (named after a Black Panther, I think, for no good reason except maybe the Internet was down that day), played by Girl-of-the-Previous-Moment Brie Larson. Her only job is to make a mystical eyeball connection with Kong a couple of times in meaningless congress. Does she love him? Does she respect him? Does she see him as she sees the other objects of her camera-eye? Don't know. Doesn't matter. Conrad is a British special services guy who...yeah, that doesn't matter, either. There's also a crazed hawk in Samuel L. Jackson's Packard. After talking about big black dicks in The Hateful Eight, Jackson squares off against a gigantic black metaphor in this one because Vietnam changes you, man. It changes you.

At the end of it all, the picture's only real saving grace is John C. Reilly as a castaway WWII airman who lands a few one-liners the way that only Reilly can, while off-setting the general shittiness of the rest of the human interaction. I'm not pretending that I was hoping for Strindberg here, but without a clear mooring for Kong as a metaphor, what Kong: Skull Island does is force consideration of its band of humans stranded in the middle of nowhere. It's porn where the sex is all CGI, if you catch my drift. Looking for meaning, this Kong is maybe representative of climate-change fears: the notion that something is happening in the world that will change it essentially and the only people with the power to potentially do something about it aren't interested in doing anything about it. If so, having it set in 1973, complete with post-credits sequence that's maybe only worth it for Toho fanboys, suggests--probably accurately--that it's too late, and this little monkey ("He's only going to get bigger!") has already reached critical mass. A sign of the times that one of the most racially-fraught in our stable of bogeys has been transformed into a straw ape for the inevitable calamity of unchecked global warming. Still, I'd see it again just to hear John C. Reilly complain about ants. At this point, he's the real eighth wonder of the world.