by Walter Chaw Charting the vicissitudes of regional attitudes and the mercurial family dynamic, Phil Morrison's Junebug restores some of the lustre to the indie dysfunction genre (and to the Sundance imprint) with a beautifully performed drama about the cost of grace. If critics have a function anymore besides carving their own gravestones on the marble of modern cinema, it's to point a finger at films like Junebug, which sounds like a thousand other pictures but is actually something all its own: a Southern Gothic in the tradition of Flannery O'Connor that treats its characters as more than plot-movers or cardboard caricatures. More, it tackles an issue as delicate as outsider art with a deceptively sharp satirist's scalpel, understanding that the best weapon against paternalism is an affectionate portrayal of people just as mean, petty, and ruined by life as the rest of us. It can't hurt that its cast is uniformly fantastic, that its script, by Angus MacLachlan, is intuitive and smart, and that Morrison understands devalued things like mise-en-scène and visual metaphors, presenting them with a quiet, unobtrusive confidence. Junebug is a character study in every way that "character study" used to be the gold standard instead of an overworked catchphrase used to describe boring, predictable low-budget movies set in the 1970s. It's nasty and it's lovely, it's nuanced and complex.

Newly married to dashing George (Alessandro Nivola), Chicago art gallery owner Madeleine (Embeth Davidtz) is on her way back to his home state of North Carolina to court moderately-disabled "found" artist David Wark (Frank Hoyt Taylor), who could be the Next Big Thing. With her British accent and carefully-cultivated air of civilization, Madeleine's immersion into the deep end of the Deep South among her in-laws (Mom & Dad (Celia Weston & In Cold Blood's Scott Wilson), brother Johnny (Ben McKenzie), and Johnny's pregnant wife, Ashley (Amy Adams)) is complicated by various degrees of social discomfort, willful ostracization, and, in the case of Ashley (and, really, Adams is amazing), a disconcerting puppy-dog infatuation. But there's more to Junebug than a fish-out-of-water intrigue married to the kind of hillbilly-baiting popularized by the Blue States. Ashley is a troubling character not because she's a dingbat, but because she might not be a dingbat--and Madeleine's quest to bring a disadvantaged southern artist into the literati spotlight is mired in problems with exploitation and a system of patronage that sees virtue (for themselves or their subjects) in noble savagery.

The film itself can be viewed as either response to or an example of the impulse to go into the great southern wilderness to capture free-range white people in their natural habitats--more an anthropological exercise than an objective one. But Junebug has a savviness, a certain sympathy for both Madeleine (who is betrayed at last by her nigh-impenetrable finishing) and George's family (who, estranged and desperate, reconnect with one another in a moment of crisis). If the collision of Madeleine with George's kin or the tragedy that re-ties the ties that bind seem contrived, consider that the film is possibly best read as a drama writ large on a Southern canvas, one splashed, like the Ann Wood paintings produced especially for the film, with the ghosts of slavery and the Civil War. When Wark proclaims that he's "always had trouble drawing nigger faces," and so paints white men's faces on the bodies of black slaves, the poignancy of that movement, independent of its inherent poignancy, identifies Junebug as something like an allegory for the ways that we deny the things we can't escape. With its best moments its most surprising, as when George sings a hymn at a family gathering, or when Ashley masturbates to a picture of a happier time between she and her husband, Junebug is a fulsome, ebullient family drama of the best kind: the kind where everybody's the villain and everybody's the hero, and it's only the situation that defines their roles from moment to moment. Originally published: September 16, 2005. 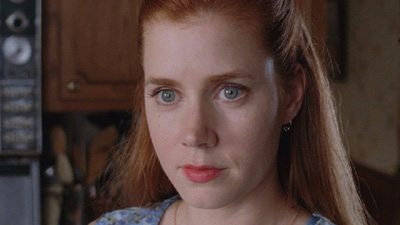 THE DVD
by Bill Chambers Sony presents Junebug on DVD in a lovely 1.78:1 anamorphic widescreen transfer. Aside from some superfluous edge-enhancement, the image is strikingly filmlike, though like the movie itself, it's so understated that it's not going to become anyone's demo disc. The accompanying Dolby Digital 5.1 audio is fittingly unobtrusive, with music and crickets being the only soundtrack elements to creep into the surround channels; dialogue is full and easy to decipher. Actresses Embeth Davidtz and recent Oscar nominee Amy Adams more or less reprise (or revert to) their Madeleine/Ashley dynamic for a film-length commentary track in which they definitely engage each other more than they do the listener. Still, it's an organic session with almost voyeuristic appeal at times thanks to Davidtz's and Adams's mutual compulsion for making a clean breast of moderately embarrassing secrets.

Under special features, find ten imminently disposable deleted scenes, including an alternate opening that introduces an elided subplot revolving around a group of art dealers who scope out David Wark on Madeleine's behalf. So unpolished are these trims (the briefest of which is just a shot of Davidtz clapping) that director Phil Morrison can often be heard throwing out offscreen suggestions. Overseen by The Grossmyth Company, a selection of Behind the Scenes featurettes composed mainly of amateur video and low-key junket interviews is divided into five parts, each one irising in on an esoteric facet of the production. In the first segment, "Places and Faces" (4 mins.), the humble sight of Davidtz peddling her way to and from the set on a bicycle goes a long way towards tamping out any lingering suspicion that Junebug's folksiness is the least bit disingenuous.

Laurel Canyon vet Alessandro Nivola remarks on his apprehension about performing for a crowd in "Singing a Hymn" (5 mins.), while "Meerkats Gone Wild" (3 mins.) finds Ben McKenzie trying not to crack up as he feigns struggle with an uncooperative VCR. (Strangely, the scene is funnier from the angle at which this B-roll was captured.) "Ashley" (3 mins.) briefly places Adams under the microscope, long enough for her to tell us that she's often accused of lacking edge. Last but not least, "All About Peg" (3 mins.) turns the spotlight over to veteran character actress Celia Weston, who psychoanalyzes alter ego Peg with a clarity that suggests kinship. Interminable "Casting Sessions" with Adams (14 mins.) and McKenzie (7 mins.) running through the same swatches of dialogue over and over again, a comprehensive photo gallery of the Outsider Art prepared for the film by "trained painter" Ann Wood, and trailers for Capote, Breakfast on Pluto, Memory of a Killer, Thumbsucker, 2046, Heights, The Squid and the Whale, and The Tenants round out the disc. The Capote and Thumbsucker previews cue up on startup. Originally published: March 10, 2006.