"You know what? Time destroys all things." 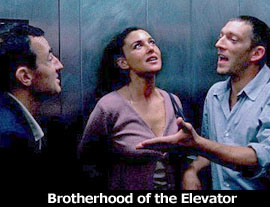 by Bill Chambers SPOILER WARNING IN EFFECT. That's the opening line of dialogue in Irréversible, meaning it comes after the closing titles, which scroll down the screen backwards and are followed by back-to-front names in block letters. Each word lands with a percussive thud ("Bellucci!" "Noé!") echoed in the sound produced by a fire extinguisher in one of the two scenes everybody's talking about: Director Gaspar Noé's secondary conceit (the primary we'll discuss momentarily) is a kind of reverse foreshadowing, with disturbing noises and gestures recontextualized elsewhere, invoking the standby "Hindsight is 20/20." A film that appeals to the pessimist in us, Irréversible may make you think of Memento, but where Memento was about destiny, Irréversible is cynicially hopeful (if there is such a thing), illustrating the human impulse to look to the past for happy endings--Bogey's bogus reassurance that "we'll always have Paris."

Monica Bellucci's Alex is the movie's nucleus, though she doesn't appear until the halfway point in Irréversible, when she ventures into the Paris underpass only to be raped and beaten by a total stranger. The film is a revenge fantasy told backwards, beginning with Alex's boyfriend (Vincent Kassel) and ex-boyfriend (Albert Dupontel) and ambulances outside the underground bordello "Rectum" (to where Kassel's and Dupontel's characters think they've tracked Alex's assailant), and concluding with something of a break in Irréversible's continuum, a pastoral reverie that can be taken any number of ways, including as Alex's fertility dream. Noé twice begins a shot of Bellucci holding a home pregnancy test with the poster for 2001: A Space Odyssey--the one stamped "The Ultimate Trip" on an image of the fetal Starchild, which seems merely associative until it occurs that the final scene in Irréversible pays homage to 2001's in its nebulous intent.

Otherwise, Irréversible is not really a puzzle picture. It is simply one scenario, told with structural efficiency, of how time destroys all things--those introductory words uttered, for what it's worth, by a naked grotesque (Philippe Nahon) we know for a minute or two, long enough to discover that he served a jail term for incest. (Nahon would appear to be reprising his butcher character from Noé's I Stand Alone.) Though he pretends to forgive the man (the unidentified weirdo in bed with him says, "No big deal"), Noé is a sexual hysteric, and that unfortunately manifests itself in the film's raging homophobia. "Rectum," a place of non-stop gay orgy where the dress code is leather bondage gear, is a conspicuous destination for Alex's rapist--in the world of Irréversible, there are two sexual orientations: hetero and depraved. More than Bellucci's voluptuous splendour and our appetite for destruction, the movie exploits gay panic, and I'm surprised it hasn't been subject to extra heat for a gay-bashing sanctioned by a bitterly ironic twist. All the chatter has instead been focused on the aesthetics of the picture's violence, which is more clinically revolting than I was prepared for but which never once gave me the urge to abandon Irréversible: it's a dare for the audience to bow out almost too transparent to offend.

Strangely enough, this collection of gimmickry, brutality, and hollow stylings (the swirling camera transitions, which at first seem a nod to the late title designer Saul Bass (a clear influence on Irréversible's main credits), grow trite fast) is best at its least visceral. The picture's second, gentler half captures the fragile ecstasy of newish romance (whilst inviting poignant memories of Alex's rape in the way she keeps pulling her half-conscious boyfriend's hand away from her mouth)--after PT Anderson's "punch-drunk love" but before the infringement of common sense--better than any movie I've seen since Waking the Dead, and there's a sequence staged on the metro that, deliberately or not, reminds of Jennifer Connelly's subway-set analysis of her relationship with Billy Crudup in that Keith Gordon film. You'd have to be a stone to not sigh in agreement with Noé that le temps détruit tout upon seeing the currently perfect specimens of real-life husband and wife Kassel and Bellucci spooning on a lazy afternoon. It is the quintessence of the cruelty Noé works so hard to portray elsewhere, ultimately validating this grindhouse wannabe. Originally published: March 7, 2003.