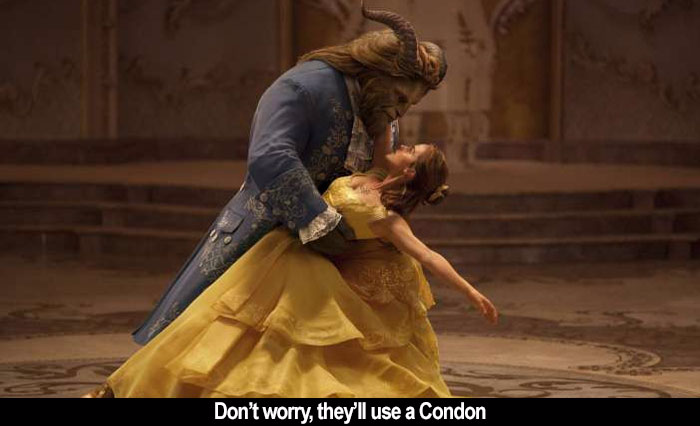 by Walter Chaw Three cheers for Disney's dedication to diversity. I saw a production of "A Christmas Carol" last year with a fully-integrated cast. It made no sense, but hooray for diversity at any cost, even at the expense of sense--even at the risk of self-parody. Even when it doesn't move the ball, necessarily. I'm not talking about making Gaston's fawning sidekick LeFou (Josh Gad) overtly gay instead of merely coding him as such, I'm talking about making every other person a person of colour for the express purpose of being on the right side of some imaginary, constantly-moving but unforgiving line in history. Sometimes, it's a good thing; sometimes it feels desperate; and sometimes, it's just premature. When it's good, it looks like Disney's Rogue One, where the diversity spoke to oppressed cultures revolting against a fascist, white-nationalist regime. When it's not good, it looks clueless. We're not a post-racial society; presenting us as such, burdened as it is by the damning weight of good intentions, comes with the danger of excreting another Cloud Atlas fantasy--the type of movie the white people in Get Out would make: tone-deaf and offensive at worst. Or, as with this live-action Beauty and the Beast, just sort of silly and twee.

Would that it had the kind of energy that silliness and childishness imply, but director Bill Condon continues to get dustier (and get Ian McKellen work well into his dotage) in this entirely lifeless, over-rehearsed, curiously flat adaptation. The problems begin with the casting of Emma Watson as Belle, the spunky free-thinker in a "provincial" small town, dealing with illiterates and blue-collar labourers who will eventually turn savage and try to murder "the other" eking out an existence on the edge of town. This premise, as interpreted by Disney, was always a little objectionable. Our editor Bill does all there needs to be done with the animated Beauty and the Beast in his legendary takedown (currently offline)--most stinging in its rebuke of the picture casting itself as a feminist fable when in truth it's more a horror movie about Stockholm Syndrome and an insufferable, self-ascribed elite bought cheap by the guy with the best presents. Casting Watson has about it a hint of self-awareness; I was reminded more than once of her stiff, accidentally-ironic performance in Sofia Coppola's ode to facile acquisitiveness, The Bling Ring. She moves with the self-conscious terror of a pageant baby, posed and made-up, wound-up and pointed in the general direction of the spotlight. Seeing her carefully arrange her one expression while doing her best to hit her marks. I like her, don't get me wrong, though I'm not sure she's an actress.

The star of the show, other than nostalgia for an entire generation of twenty-somethings who wore out their VHS tapes of this thing at daycare, is the motion-capture phantom of Dan Stevens as the transmogrified Beast. He has moments of genuine, wounded pathos throughout. He saves the film single-handedly a time or two, but alas he only has two hands. The rest of it follows the motions of its animated predecessor lock-step (all the Menken/Ashman songs are there, plus a few new tunes exclusive to the film), yet the transition to live-action, despite a gargantuan budget, makes it all seem smaller somehow. Stagebound. Animation allows for the "Be Our Guest" sequence to telescope out--its spaces become non-linear and there's a certain grandeur to its presentation. With CGI and a decided unwillingness or inability to play with geography, this live-action version feels muted, creepy--a shitty amusement-park ride already past its sell-by date. Beauty and the Beast does try to address some of the problems of its source by making Belle a bit more feminist, and Gaston's death more a result of self-inflicted happenstance than of righteous murder. Ultimately, what's interesting about the film is that it's another girl hero-based narrative, this time addressing the cultural imbalance between the educated and the undereducated: the way that both can be manipulated by specific messages, and how mob mentalities create sharp, epoch-defining divides. That makes the picture's resolution uncomfortable, to say the least. I don't believe that we heal this easily from our schism, if at all. If there's anything the intervening twenty-six years have taught us, it's to abandon hope that those stupid, brutal fucks will ever read a book.