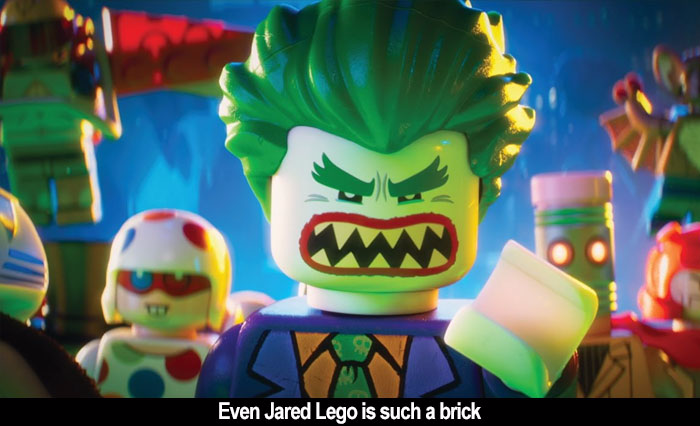 by Walter Chaw Ugly, loud, twenty minutes too long, and half as clever as it thinks it is, Cartoon Network stalwart Chris McKay's The Lego Batman Movie is saved from becoming something other than Shrek: Longform Commercial by a single scene that demonstrates a genuine emotional knowledge of the Batman character: Batman (a returning Will Arnett), after a long day of antic motion, stays up by himself in his immense, empty home, gazing at a picture of his dead parents and wishing they could have seen how he turned out. It happens early, though, and the rest of the picture's content to make fun of DC lore ("It's worth a Google!" says Joker (voiced by Zach Galifianakis), having listed a few of the stupider villains in Batman's rogue's gallery) while attempting occasional earnestness here and there along the long road to the standard kid-fare message of "family is where you find it." The Lego Batman Movie is both fan-pleasing and self-loathing, placing it in the company of the wave of faux-nostalgia garbage millennials wear now like that tenth-generation McGinty claiming Irish heritage on St. Patrick's Day. A low bar for inauthenticity, and by the third or fourth joke about how corny the old TV show is, you remember the old TV show had more meta intelligence in any ten minutes of a given episode than the whole of this exhausting exercise.

Batman fights the Joker. It gives him meaning, yet because he's a narcissistic billionaire who does pay taxes (his opening song winks), he's not able to admit that he's dependent on arch-nemesis Joker for a reason to exist. There's something interesting in the framing of Batman as Sisyphus and Joker as his boulder, but the film doesn't go much farther than that. It's not that kind of movie. Instead, McKay packs every inch of the screen with seizure-inducing detail, populating the narrative with hundreds of characters and gags that disappoint for their lack of variety. DC/WB in-jokes? Check. The entire Bats oeuvre? Indeed. Slapstick action sequences that manage somehow not to capitalize on the possibilities of the premise? Those, too. The enduring appeal of Lego blocks is their versatility. The first film, for all its faults, understood that elasticity. Here, the world seems rigid. The builds never devolve into the surreal physics- and sense-defying machinations of play, but rather are bound, for the most part, by the instruction booklet included with every set, should you want to stop by Target on the way home. Like with many comic-book properties, even this one seems like it has canon to answer to. And of course the picture scoffs at our hero the braggart, whose belief in himself as the sole answer to solving the world's ills is just not funny anymore, as it happens. Nor is it ever conducive to comedy when a film goes as far as The Lego Batman Movie does to leaven its irreverence with a heart-warming throughline, this one concerning the world's most famous orphan working through his attachment issues. Fortunately, there's a reference to Gymkata that earns The Lego Batman Movie an extra ½ star.

The Lego Batman Movie may have worked as existential absurdism; I like to imagine Jan Svankmajer being tasked to create one of these things. What it is, instead, is a toy flick assembled like a series of two-hundred or so memes--an attention-deficient avoidance of cohesion that would play better as a cautionary tale of what happens when five writers try to agree with a marketing department. Consider a jokey-joke whereby the newly-dubbed "Batgirl" (Rosario Dawson) sasses, "If you call me 'Batgirl', do I get to call you 'Batboy'?" A play at empowerment, I suppose, that sort of sounds like half-come-on/half-accidental baseball joke. It might also be a gay joke, somehow, like the entire bit with Robin (Michael Cera), a walking punchline in his sparkly cape and pantslessness. There's uncertainty because it's lip service; it lacks conviction. Tossed in there with less care than a running gag about the ketchup and mustard-squirting Condiment Man, it's as hobbled as the toothless Trump jokes, the flaccid, maudlin tugs at the heart, the beatbox gags, and, sigh, the end-credits dance party. Symptomatic, all, of an alarming surfeit of imagination that fulfills, in a way, the warning provided by The Lego Movie: Slavish devotion to formulas strangles inspiration, especially when there's so much potential in these building blocks.