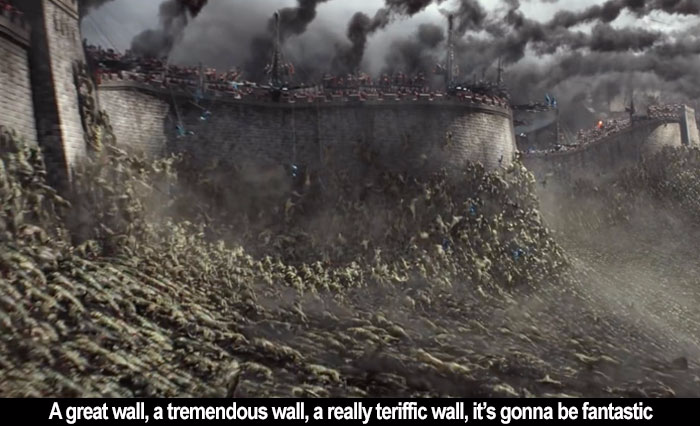 by Walter Chaw Gloriously, fantastically stupid from beginning to end, Fifth Generation legend Zhang Yimou's The Great Wall is also, you know, not terrible on the grand scale of terrible things. The popular narrative around this picture is the casting of Matt Damon as some sort of "white savior" in a film about China's most notable architectural achievement--except that it's not really about the Wall and Damon doesn't really save anything, though he does put to rest any sort of debate about whether or not he's a credible action star...or even star star. He tries on an Irish accent here that consists mainly of his trying to talk around a marble. That is, when he remembers he's supposed to be doing an accent. It's Kevin Costner-as-Robin Hood levels of comically-horrific, and, just like Costner's Robin Hood: Prince of Thieves, The Great Wall is an attempt to grit-up and culturally contextualize some ridiculous rural folktale. The folktale in this instance is Zhang's own classic Red Sorghum, which earned him some trouble upon release because of its depiction of the old men running the Chinese government as senile, corrupt, and perverse. Indeed, The Great Wall depicts Chinese leadership as tradition-bound in a bad way, its "emperor" figure a child hiding behind his throne. It wouldn't be much of a stretch to see the monstrous child in Red Sorghum grown into this pathetic figure of a leader. If the film weren't so stupid, in other words, it would probably have gotten Zhang in trouble again.

And stupid it is. But it's inoffensive, I should add. As an American-born Chinese guy, the issues of yellowface and representation in American film are close to my heart. I grew up identifying with Luke Skywalker. When a high-school girlfriend's father told me I wasn't "good enough" for his daughter, I just assumed he meant because my parents owned gift shops and we lived in a modest house in a modest neighborhood. I'm guarded about this new thing of allies rushing to my defense against the likes of Doctor Strange and Ghost in the Shell when most of these same allies defended Cloud Atlas, a film so enthusiastically tone-deaf and offensive to Asians that I can't even begin to begin. The Goonies? Sixteen Candles? Where were you when I needed you? I think that if you make Doctor Strange at all, you can't avoid controversy. Batman Begins, in appropriating the Strange origin story, skates by somehow by having Ken Watanabe act as the bait-and-switch for Liam Neeson's Irish Ra's al Ghul. Seems to me that some of the outrage, however misplaced, over Tilda Swinton's Irish (Celtic) Ancient One should have been spent on that, but whatever, neither upset me much. (How about the "lip them, lip them" hooker in Lost in Translation? Fair pool?) Remake The Green Hornet and no matter you do, you'll end up either embracing or commenting on an old attitude. More interesting to me is this notion that a good swap for Oriental stereotype is Irishman, given how both were treated as subhuman swine in the United States, once upon a time. In the inevitable Gremlins reboot, who but Brendan Gleeson could play the mysterious curio-shop owner?

The Great Wall is proof in action of truths that are uncomfortable for white people. Liberals and Conservatives, both. It's packed with moments where the Chinese make fun of the white people, look at each other out of the corners of their eyes whenever the white people speak, are very surprised when one of the white people doesn't betray them instantly (as every other white person does), and, in a gesture of "acceptance," immediately expel the white people at the nearest opportunity to do so. Damon's William, the representative of the West, is filthy, unkempt, uncivilized. He's an animal and called as much repeatedly in the film. There is no hint of a love-interest angle, no suggestion that he could ever fit into China's world of cultural and technological achievement. William is handy with a bow. When his usefulness is sapped, he's released back into the wild like a good animal should be. You could read The Great Wall as a white-savior narrative, I guess, if you saw yourself as a white savior. The Chinese don't need Matt Damon. It's interesting because it's the Chinese who sought out Damon (and co-star Willem Dafoe) to be in this film to increase its chances of penetrating the American market, in the same way that American films are now trying to insert Asian characters and settings in order to better their chances with the looming Chinese audience. There's an interesting thing to consider, too, in the uneasy relationship that Asia has with Western acculturation. There's the epidemic of plastic surgery in South Korea, the tradition of autonomous race-denial in Japan and China--there's even an episode of "M*A*S*H" that deals with a little Korean kid who longs for a procedure to make his eyes round. An argument should be made that Major in Ghost in the Shell isn't actually supposed to look Japanese.

Anyway, in The Great Wall, a bunch of lizard things with a telepathic queen (a lot like the bugs in Starship Troopers--and Independence Day 2, come to think of it) are attacking China for some reason. The Chinese, for their part, prepare a response at the Great Wall. After some dramatic CGI things happen, Commander Lin (Jing Tian) becomes General Lin, meaning the film is essentially about two women leaders fighting for the fate of the civilized world (i.e., China). In the past, Jing Tian has co-starred with Jackie Chan and Donnie Yen, so it's taking a giant step down to appear in a film with Matt Damon, but such are the things you suffer for God and country. She plays it like that, too. William is a talented monkey who needs to be taught how to speak a single word in Chinese. He learns it--not well, but not bad for a monkey, I suppose. At one point, William says to his buddy Tovar (Pedro Pascal), a Spaniard so beneath China's contempt that I don't think any Asian actor in the cast ever says anything to him, that he's never seen anything like the army assembled before him in terms of its organization and its squad of Suicide Girls bungee-jumping to their deaths with javelins in each hand. The Great Wall is interesting commentary on stuff like this: white missionaries going into agrarian cultures to teach them how to plant things. Better to tease out threads like how any film by Zhang Yimou is interesting politically, how this is essentially a fable about how China is the last stand between the barbarians at the gate and you, how Americans are easily-manipulated fiscal pawns in a game they don't realize they're playing (much less losing), or how being outraged about things you don't understand makes Chinese people look at you out of the corners of their eyes and smile politely.