by Walter Chaw Kenneth Lonergan is a brilliant writer who specializes in small interpersonal moments. His plays are extraordinar­­y. The two previous films he directed, You Can Count on Me and Margaret, are masterful portraits of human failure and weakness. He is a poet of imperfection and imperfect resolution. Margaret gained attention for the lengths to which Lonergan fought for a cut that exceeded a contracted-upon two-and-a-half-hour running time. Martin Scorsese, with whom Lonergan collaborated on the script for Gangs of New York, helped facilitate a 165-minute cut that to my knowledge has never been screened. When Margaret finally hit home video after a swell of support from online advocates, the long version had inflated to 186 minutes. I've only seen the theatrical and extended cuts of the film. I love them both. I rarely wish movies were longer; Lonergan's are the exception. That has something to do with his writing, of course, and something to do with his casts, who, to a one, have contributed extraordinary work--perhaps the best work of their careers. Crucially, Lonergan trusts them to deliver his words. He doesn't garnish them with gaudy camera angles, or underscore them with expository soundtrack cues. Mark Ruffalo once said of Lonergan, affectionately, that the playwright was only playing at being humble. For me, however Lonergan is with other people, his humility comes through in the extent to which he allows his actors to do their job.

In Manchester by the Sea, Casey Affleck is Lee, a janitor living in a sparsely-furnished basement apartment in Boston in one of the buildings for which he's the custodian. After telling off a middle-aged tenant during his rounds, his boss tells him that multiple people have complained of his rudeness. Lee refuses to apologize. His boss says "OK" and that he'll take care of it. Lee is given to moments of violence, picking fights with strangers in bars, and ignoring advances from women drawn to him by his complete indifference to them. He reminds of the Adam Sandler character in Punch-Drunk Love. There's something wrong with him. Sometimes he explodes. Mostly he doesn't. In a different film, Lee would find love and peace. In Lonergan's, he tells his nephew Patrick (Lucas Hedges, a star after this) that he's sorry, but he can't beat "this." The "this" is the crux of the film: a terrible thing that calves Lee off from the rest of society, and he from it. A few of Patrick's hockey teammates whisper among themselves that there he is, Lee, and another offers that 'you know what they say about what he did was total crap, right?' There's a real understanding of how people talk and how important it is that people do talk. It makes Lee's reluctance to say anything an interesting counterpoint to all the noise. The first third of the film shows Lee moving through the world quietly. He puts things in dumpsters, he shovels and salts walks, he listens in on other people's conversations as if to validate his decision to remain disengaged. Then his brother dies.

Lonergan shows their relationship in a series of flashbacks that are surprising mainly for how energetic and playful Lee is in them. He has or had at one time a family, a wife named Randy (Michelle Williams) and three little kids. We know that something terrible has happened. In a literal way, Lonergan tells us that the loss of Lee's brother will be the catalyst that forces him to confront his past. In an allegorical way, Lonergan tells us that loss is the catalyzing agent that forces us all to confront our past. There's a scene in the morgue where Patrick looks at his father's body for a moment, swaddled in a body bag, that reminded me of the scene in my past where I was taken into a back room of the hospital and shown my father's body unzipped from a body bag. Manchester by the Sea is deeply observant about things like that. Lonergan's gift is that he lets them be what they are. He doesn't embellish. It's shattering to lose you father--no need to narrate it. Manchester by the Sea is extremely funny because of that keenness and intuition, and it's emotionally devastating in equal measure because of that, too. I love the scene where a mother asks her daughter's boyfriend how their math homework's going, knowing full well from interrupting them constantly that the kids have been fooling around. "It's real frustratin', ma'am," he says. And then there's a solid thirty minutes in the second half of the film that are almost unbearable as Lonergan goes from Patrick's first expressions of grief through to Lee being confronted on the street by his ex-wife in a scene that begins with a familiar phrase, and ends with a complete walling-off. A different, less well-observed film would've seen a coming-together. Things almost never work out like they do in the movies.

Lee can't beat it. He can't beat his grief, his guilt, his self-loathing. He plays out a certain kind of wounded masculinity and the expression of it. He's unhealthy, unself-actualized, all of the things that lead to a closed-off, lonesome existence. I think back to the last two years of my father's life. (I can't help it.) We both knew he was going to die. Neither of us could say the things we needed to say to each other. We tried to express them in different, unspoken ways. Moving Lee into his apartment in flashback, his brother Joe (Kyle Chandler) insists that Lee buy chairs and a table. They fight over it. The dust settles. Joe says "c'mon" and holds the door open until Lee follows. Joe's concern is unspoken. Lee's acceptance of help is unspoken, too. Later, Lee says to Patrick that Lee needs to find a new place that has two rooms. Patrick asks why. It's amazing to me that all these little moments are balanced so effortlessly and well between the melodrama of the gestures and the subtlety of their execution. Lonergan trusts his audience as he trusts his cast. Even scenes that don't land as solidly--like the introduction of Patrick's estranged mother (Gretchen Mol), now engaged to a creepy Christian schlub (Matthew Broderick), still have about them a sense of Lonergan's curmudgeonly, East Coast intellectual personality. These are the only characters he's unkind to in the film. I wonder if it's because he doesn't like broken people when they're in denial about it. Manchester by the Sea would fit well with Punch-Drunk Love and Greenberg as affectionate portraits of failed men. It's so exquisitely-written. So intimately-observed. Until the end of her life, Giulietta Masina would have people approaching her asking how Cabiria is. I've wondered often since seeing Manchester by the Sea how Lee is doing. Well, I hope. Originally published: September 12, 2016. 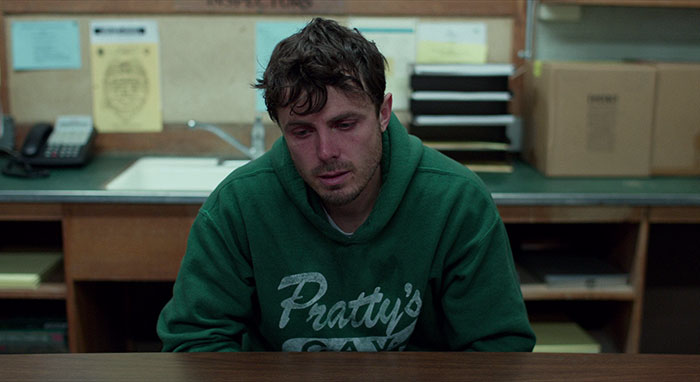 THE BLU-RAY DISC
by Bill Chambers Lionsgate brings Manchester by the Sea to Blu-ray in a 1.85:1, 1080p transfer that's probably critic-proof, given that the genre of the film won't result in it being held up to the same technical scrutiny as the latest blockbuster. Nevertheless, video noise infrequently compromises the glassy clarity of the image, and it's intense enough that it looks like light snow. Indeed, the first time it materialized, in an exterior shot around the 14-minute mark, I thought it was light snow, but the problem persists in interior scenes and is indicated by an instantaneous decrease in dynamic range, as well as softer focus and a notably shallow depth-of-field. Could these be the shots captured by the fabled high-speed Canon K35 lenses, a.k.a., the Aliens lenses? (The K35s exhibit "less sharpness and contrast than most modern lenses," according to the site of equipment-rental house Camtec.) If so, it suggests the issue is baked into the source. Having missed Manchester by the Sea on the big screen, I can only speculate. I actually found myself wishing the presentation were levelled out in favour of these faux-grainy incursions, as they lend the film a 16mm quality it kind of craves; the bulk of it is as Lawrence described the desert: clean--perhaps too clean. The attendant 5.1 DTS-HD MA track reproduces a fairly utilitarian mix crisply and warmly.

Writer-director Kenneth Lonergan records a feature-length commentary with moderator Peter Ventrella, who's very good at prompting the nasally Lonergan towards retrospection and insight. They discuss everything from the decision to set the film in and around Boston to the narrative developing underneath the drama through the idiosyncratic use of music, pausing occasionally to take in the movie and recalibrate. Lonergan is not the most lively speaker, but don't mistake his monotone for monotony. Video-based extras begin with "Emotional Lives: Making Manchester by the Sea" (16 mins., HD), which mostly invites the principals from in front of and behind the camera to recap the movie's plot and wax poetic on the motivations of its characters. Lonergan and the core ensemble come in for praise, natch, with Casey Affleck getting the lion's share of it not just for his own work in the film, but also for helping tease a good performance out of young co-star Lucas Hedges. Finally, flashbacks comprise the three deleted scenes, all of them perfectly good in and of themselves but as gratuitous as their cutting-room floor status implies. I'm glad Lonergan omitted the funeral for Lee's family; it's something too inconceivable to illustrate. A HiDef block of trailers for Southside with You, Patriots Day, Indignation, Café Society, and La La Land rounds out the disc, part of a combo pack that includes DVD and digital copies of Manchester by the Sea. 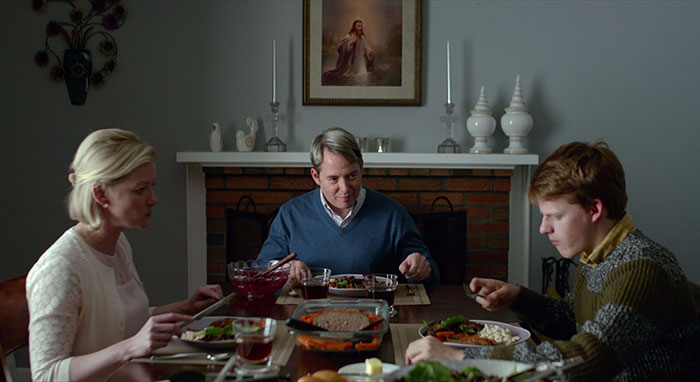