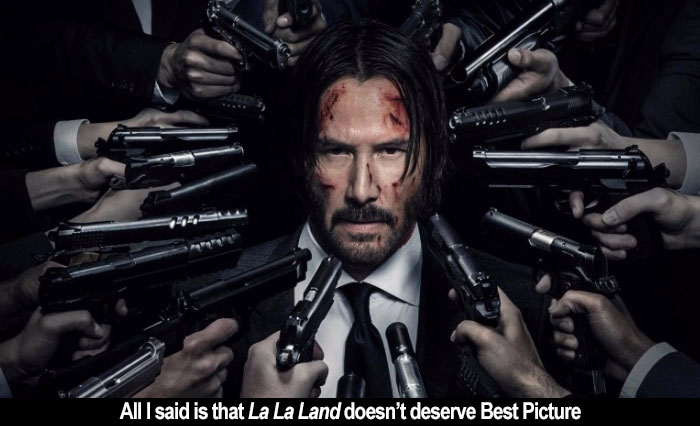 by Walter Chaw There's something of Highlander in John Wick: Chapter 2, this idea that there are people-looking things walking among us, wrestling for control of something, jockeying for arcane positions in mysterious hierarchies. It's disturbing in the best way; dislocating, world-building. It's what makes stuff like The Matrix work, the suggestion that there's a reality underlying ours--and in a scene among pigeons on top of a New York tenement, the film features a Matrix reunion where Morpheus (Laurence Fishburne) greets Neo (Keanu Reeves) with a "been a long time" nod. John Wick: Chapter 2 is meta in a way that fits exactly right into the feeling of a picture that spends most of its time building on the alternate universe introduced in the original. It's aligned right there with M. Night Shyamalan's Split and the possibility that there are comic-book worlds outside of DC and Marvel and they're, what's the word? They're amazing.

The John Wick universe is structured around the exchange of gold coins, the value of one's word, and the establishment of bureaucratic businesses that service its subterranean transactions. There's a sequence in the middle where Wick (Reeves) and an adversary (Common) engage in a silenced gun battle while a subway full of commuters carry on with their day to day, blithely. It's glorious. Much of the dialogue revolves around ideas like "professional courtesy," being at work and working, and the non-negotiability of signed contracts. A ledger of bloody thumbprints indicates Mephistophelian bargains--one of numerous subtle suggestions that whatever rules there are in this world, they are not only numerous, but ancient. I adore the scenes in which assassins call in contracts on one another and are shunted through a call centre manned by Suicide Girls with tattoo sleeves who speak with the courtesy and professionalism of 1950s switchboard operators. I adore another scene where, in a call-out to Sam Keith's "The Maxx", there is a community of homeless people who have organized around a central, arcane principle of acquisition and distribution. "Seven bullets, seven million," their leader (Fishburne) says, referring to how much help he's giving Wick in direct relation to the size of the price on Wick's head. They follow codes. The glory of John Wick: Chapter 2 is that it spends a great deal of time revealing more of them.

Proceeding immediately from the events of the first film, the sequel opens with Wick reacquiring the car that was stolen from him last time. It has the feeling, this action, of the Sandman spending the first part of Neil Gaiman's Vertigo run reacquiring the artifacts of his office. There's something mystical, ritualistic about it; the boogeyman needs the raiments of his occupation. He caps the teaser by pouring two shots of vodka and declaring "mir" with his adversary. It means "peace," though in Russian, "mir" can also mean "world." I like the idea that John Wick: Chapter 2 opens with a thesis declaration: it's going to be about this world. Wick wants to retire from it, as he had at the beginning of the first film, but it turns out the way he escaped initially was by committing a "marker" to an Italian kingpin (Ricardo Scamarcio) who now wishes to call that marker in. Unfortunately, once complete, Wick becomes a loose end that needs to be tied. This leads to a series of brilliant action sequences devoted to sense of space and physicality. They are delightful, absolutely, with director Chad Stahelski trying new things like a chase through catacombs underneath Rome that plays like the finale of The Third Man, but with combat shotguns and headshots. Not for nothing, another nod to Orson Welles comes in John Wick: Chapter 2's finale in a hall-of-mirrors shootout at an exhibit concerned with the appearance of the soul. It's smart is what I'm saying.

The image of mirrors speaks, too, of introspection, and there's a certain level of that here in Wick's obvious desire to simplify, to coalesce around totemic objects and withdraw from, literally, the World. In one way, the picture's about the futility of individual choice. When Winston (Ian McShane), the general manager of the Continental Hotel in New York (which offers sanctuary and outfit to the universe of these films), declares that he is lord and master of that particular plot of land, it's the kind of boast that rings hollow in this context. A quick shot of his compatriot in Italy--it's Franco Nero, because of course it is--offers up ambiguity as counterpoint to Winston's arrogance. Winston makes a decision at the end that I imagine will pay off in "chapter three." It's fun to speculate when the movies are this fun. John Wick: Chapter 2 ultimately has about it something of Michael Corleone's lament that just when you think you're out, they'll pull you back in. It's the way of the universe, the "Twilight Zone" episode with Robert Redford as Mr. Death: You can oubliette yourself in a cocoon somewhere in the city, but there are rules and rules come a-calling in time. John Wick: Chapter 2 isn't perfect. Doesn't matter. It's fantastic.