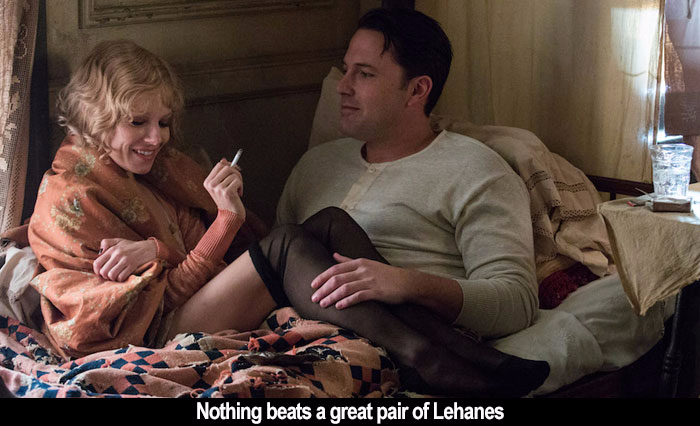 by Walter Chaw I like Ben Affleck. I like him better as a director than an actor, but I like him in both roles. Live by Night is his The Postman. I mean that with affection, and I suspect the film will likely gain some critical and cult momentum in a few years' time--but not too much, because Live by Night is not quite stupid enough, strange enough, rough-around-the-corners enough, to really latch onto. What it is, instead, is a throwback to the kinds of movies Taylor Hackford likes to make: glossy, edgeless, overheated prestige entertainments that are sometimes, as was the case with his Proof of Life, more interesting for the publicity drama they create than for the films themselves. If you doubt the Hackford-ness of it, consider the embarrassing amount of time Affleck devotes to "steamy" '80s-era sex scenes, which are made unbearable by the soulful softcore thrusting. For Live by Night, the external mess is the hubbub over whether or not Affleck will direct an anticipated standalone Batman movie to rescue DC and Warner Bros. from their own curious tone-deafness. The spectre of Batman tends to distract from whatever's going on in the film, especially as Affleck continues to evolve physically into a perfect cube. Since you're asking, Live by Night's earnest corniness does suggest that he is probably the right man to guide a rebooted Batman franchise.

For now, Affleck is Prohibition-era stick-up man Joe Coughlin, who, after the ignoble death of his Dickensian girlfriend Emma (Sienna Miller) at the hands of mob boss Albert White (Robert Glenister), decides to move to Florida to become a rum bootlegger--for, you know, revenge. Once there, he meets the alluring Cuban smuggler Graciela (Zoe Saldana), proving mainly that Joe has a weakness for charter members of the Bad Accent Theatre Troupe, 1920s Gangster edition. Graciela is mostly used as a prop for Joe's evolution from square-jawed bandit to square-jawed minor crime lord, coming in particularly useful when Joe's operation is threatened by the Klan and their predilection for the colourful use of the term "niggerlover." This helps to establish either Joe as a decent guy or Live by Night as exploitatively progressive. Let's not fight: it does both. The weirdest subplot, though, involves peculiar Miami police chief Figgis (Chris Cooper) and his wayward daughter, Loretta (Elle Fanning), who goes to L.A. to pursue fame in Hollywood only to end up hooked on smack and taking stroke pics, the better with which to blackmail dad somewhere along the way. She turns into a popular revival-tent preacher who threatens Joe's plans to divest his rum smuggling into a casino. I could go on. The film certainly does.

Live by Night has violence, sex, miscegenation, inbred racists, and sweatiness, but it doesn't have authenticity. Everything feels like performance: the sets, the costumes, the people. It's like Dick Tracy. Just like, in fact. Moreover, it's the remake of The Road to Perdition no one was asking for and fewer have welcomed. It's flat as a pancake. Yet there are reasons to watch it. Robert Richardson's ridiculously beautiful cinematography is one; Brendan Gleeson's too-small turn as Joe's stern police-captain father is another. I'd even add that it's worth it just for the scene where everything screeches to a halt for a couple of minutes while Joe delivers an impassioned, vein-popping progressive screed about how all you rich white guys better watch out, because the United States is a confidence game cooked for the ruling class and one day poor, downtrodden minorities and women will rise up and take what's theirs. It's an amazing thing to hear coming from someone who looks like Joe and has profited so mightily in this film from the very folks he's speaking for in this moment.

It's a demonstration of the instinct that powerful entertainers sometimes have when, at the height of their popularity, they feel that their opinions, however childish or simple, are valuable and important. Director Rachel Talalay has a term for this I'd only butcher, but it has to do with delusion and fame and Hollywood. Dances With Wolves, for instance, is the worst thing that could have happened to Kevin Costner, as his peers sanctified his budding awareness. Something similar happened with Kevin Spacey, who went from making edgy pictures to playing Jesus in a series of self-aggrandizing liberal hosannas. And it seems to have happened to Affleck here, as Live by Night is a film so idiosyncratic, so patronizing, so well-intended and socially responsible at its heart, that it could only be made by someone this obviously powerful. Powerful enough that there aren't too many people left who would tell him the truth. Live by Night is expensively bad, although it deserves a sad glance and a pat on the head more than the heel to the curb it's likely to suffer.