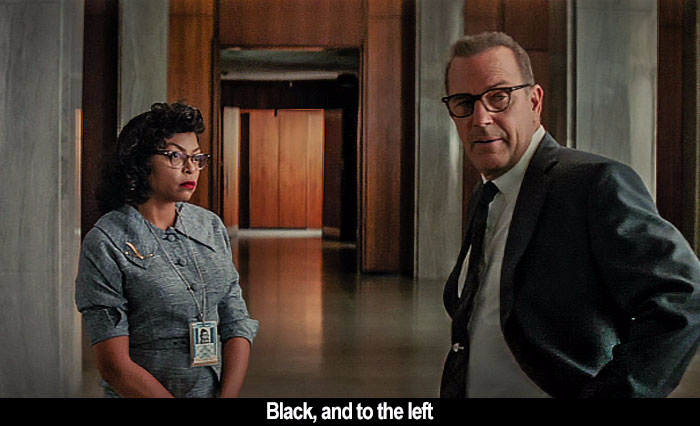 by Walter Chaw Theodore Melfi's Hidden Figures is so inextricably bonded to the rote motions of awards-season biographical uplift melodrama that it functions as proof of a template studios give to directors who won't kick too much about art and individuality and expression and all that high-falutin' stuff. Better, it's proof of an attachment that fits onto the Studio sausage press ensuring that all the mashed and salted discards are extruded in the proper proportion into the collective cow gut. Hidden Figures is the story of three African-American women in the 1960s who go to work for NASA's Mercury program in the days after the Sputnik launch. It talks about how they're brilliant but forced to pee in segregated bathrooms; how they're proud family women but treated like second-class citizens or worse. It positions a white man of power who sees their value all the way through to letting one of the ladies be a co-author on a report she seems to have written herself. It has the end-credits thing where pictures of the real women whose stories the movie ostensibly tells are shown with titles detailing the horrific shit they endured to get their names on a building. Well, one of them anyway. It even has that thing in movies about numbers where there's a lot of running to try to make math exciting to watch. What it doesn't have is any lingering impact whatsoever: no gravitas, no surprise, no interest, nothing. The only thing to say about Hidden Figures, really, is that if you spend time praising it, you're being patronizing--and that is the very definition of irony.

Katherine Johnson (Taraji P. Henson) is brilliant. So are Dorothy Vaughan (Octavia Spencer) and Mary Jackson (Janelle Monáe). They're all three of them brilliant. They're also black, meaning they're looked down upon by casually-racist colleagues Vivian Michael (Kirsten Dunst) and Paul Stafford (Jim Parsons). To be fair, Stafford may be more misogynistic than racist. Their boss is Al Harrison (Kevin Costner), who, because he looks just like Kevin Costner, is the white person Polaris around which black melodramas intended to make white audiences feel good about their lack of casual racism revolves. Al just wants to get things done and is surprised when Katherine gives an impassioned, spit-flecked rail about how she has to run across the campus to use the coloured restrooms. This leads to the uplifting moment where Al knocks down the "coloured ladies" sign above the restroom and declares that, at NASA, everyone is the same colour. What colour is that, I wonder? If they're all black now, he should've left the sign up. Anyway, he does this because Katherine is the best computer they have, going through reams of numbers with her beautiful mind to the consternation of chief antagonist Stafford. If you think Stafford will come around eventually, well...you're right. Good work!

Everything mildly interesting the film has to say about the Mercury program was said better by The Right Stuff. Everything the film has to say about race was said better by the "Race Together" fiasco Starbucks thought was a good idea last awards season. Between the issues, find a church-picnic scene where Katherine sees Jim Johnson (Mahershala Ali) and her sassy friends conspire to help her get her groove back. Yes, there's a romance shoehorned in here because any story about three brilliant black women scientists has to involve a handsome Prince Charming to save her from her loneliness. I like the proposal scene where Melfi does his best to wring some tears from adorable-kid reaction shots. See, Hidden Figures isn't so much racist as it is misogynistic. Is there such a thing as paternalistic misogyny, or is that a misnomer? One of the other women--Mary, I think--also has a husband who is a stand-in for violent protest. He doesn't like that his wife has to demean herself and work for The Man, but if you think he'll come around eventually, well, you're right again. You've been paying attention, nice job.

Hidden Figures is a relic. It's the kind of movie where you compliment the performances and then trail off because there's nothing much left to say that won't make you sound like a jerk. It'll inspire Google searches wondering if that scene where all the ladies march to a gospel song with a smug look on their faces as the white folks look on actually happened that way or is, you know, condescending bullshit. The little it teaches about an important history is taught without much context or insight into how it's important, or why. The picture engages a conversation that's all the more important for our being on the precipice of another Dark Ages, but has absolutely nothing to say. At least a quarter of this population believes that science and education are a plot against them; it's become clear there are no guardians at the gate. There's just Hidden Figures, this feel-good piece of shit that reassures everyone that everything will work out, that everything is OK. Oh, and that ignorant, hateful dumpster-fire in a suit who is antithetical to everything you believe in? I'm sure he'll come around eventually, too.