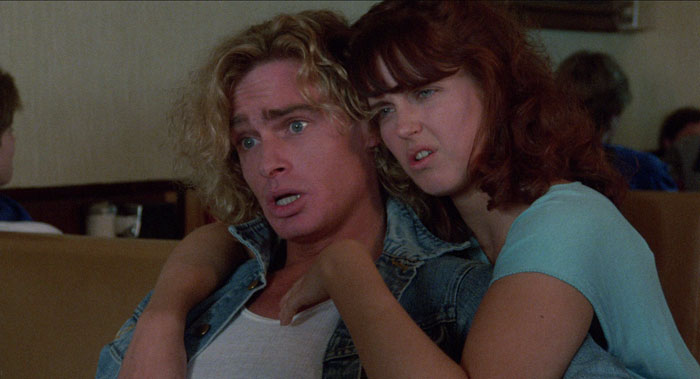 **/**** Image A- Sound B Extras B+
starring Michael Garfield, Kim Terry, Philip MacHale, Concha Cuetos
screenplay by Ron Gantman, based on the novel by Shaun Hutson
directed by J.P. Simon

by Bryant Frazer "I recognize terror as the finest emotion," Stephen King wrote in Danse Macabre, his 1981 book-length rumination on horror and storytelling, "and so I will try to terrorize the reader. But if I find I cannot terrify him/her, I will try to horrify; and if I find I cannot horrify, I'll go for the gross-out. I'm not proud." That's where the late Juan Piquer Simón (or J.P. Simon, as it became anglicized) must have found himself on the set of Slugs. The native Spaniard was only so-so as a director: He was technically competent, with a decent eye for composition, but he wasn't so adept with English-speaking actors and had no real knack for generating suspense or escalating tension. Fortunately, Simón is pretty good with the gory stuff. And that's why, decades later, his Slugs still crawls tall as a minor classic for creature-feature completists.

For a solid 45 minutes, set-piece after bargain-basement set-piece escalates the gross-out factor as county health inspector Mike Brady (Michael Garfield) and sanitation supervisor Don Palmer (Philip MacHale) investigate a series of strange deaths in upstate New York. As the bodies pile up, Mike deduces that carnivorous slugs, mutated by exposure to a poisonous landfill, are eating their way through the citizenry. Mike's appeals to local authorities, who are priming the toxic-waste dump in question for a lucrative retail development, are rejected, forcing him to take matters into his own hands. Sure, the story is boilerplate, but the execution is energetic. When our hero starts poking around in his garden and a killer slug suddenly bares its nasty little teeth and bites his stupidly extended fingertip, I let out an involuntary little yelp of pleasure, sitting alone in my living room. It's just a close-up of a phony slug puppet and a poorly-constructed prosthetic finger, but it's unexpected and perfectly timed. It's wicked fun.

Simón had already established his genre bona fides with Pieces, an exceptionally bloody slasher movie that made waves with the FANGORIA crowd, and he hit a few more sensationally sickening notes here. After a terrible, amateurish prologue about a boating outing gone wrong, Slugs gets into a groove with a disquieting vignette about an old drunk who crashes on his couch without noticing that scores of slimy somethings, attracted to the filth that carpets his decrepit abode, have moved in under the cushions. There's an episode where a gardener tries to lop off his own hand to get rid of one of the sticky buggers (it ends, amazingly, with a greenhouse literally exploding), and another where a woman starts chopping a salad without realizing that she's slicing a slug along with her iceberg lettuce. And then there's the pièce de résistance, a scene near the film's middle where a couple of completely-nude teenaged lovebirds find themselves swimming in the things post coitus. A few minutes later, a guy's eyeball explodes in a cloud of actual worms, and it's clear that Slugs has found a way to be its very best self. These are some of the most gleefully stomach-turning scenes ever committed to celluloid.

Too bad the show is derailed at about the halfway mark by, you know, story. As soon as Simón gets distracted from his Grand Guignol by the necessity of devising a way for Mike to engineer a slug showdown in act three, the film slips into humdrum territory. The deliberately (?) overripe dialogue is good for a few more chuckles, while the scene where a utilities official upbraids Mike--who wants to declare a state of emergency--by reminding him, "You ain't got the authority to declare happy birthday!," could be the ne plus ultra of inept cinema. But repeated references to an upcoming Halloween party that seem to augur a spectacular finish with a throng of hormone-addled teens come to naught. Instead, we get Mike and Don running around endlessly in the sewers with a bag of red meat, trying to pinpoint the slugs' breeding ground so they can use a special chemical to vaporize them. It's tedious stuff, devoid of surprises and spectacle, and it just grinds on and on to completion. Still, the fully-loaded first half should earn Slugs a berth in anyone's canon of cheeseball animal-attack flicks. 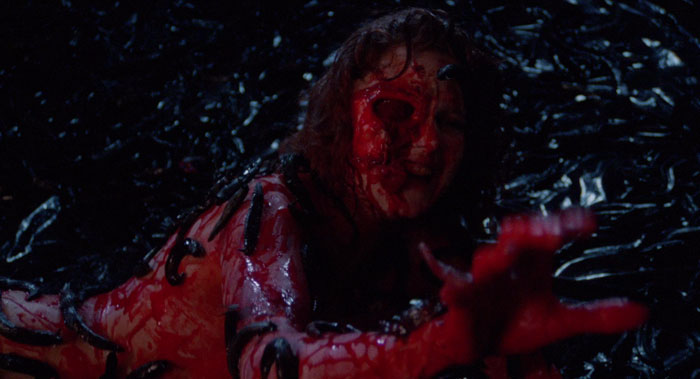 THE BLU-RAY DISC
Arrow Video's Blu-ray release does the movie justice and then some, delivering it in a 1080p transfer from a new 2K master made from "original film elements," slightly letterboxed to a historically accurate 1.85:1 aspect ratio. The video bitrate averages 30 Mbps, enough to handle a velvety layer of film grain, and the picture looks just about exactly right. As usual, Arrow strikes a nice balance between dust-busting and detail, offering an exceptionally clean presentation without noticeably reducing overall sharpness. The image has medium contrast, without inky shadows or blazing highlights, and the overall look is appropriate to a film from the late-1980s. Audio seems to be faithfully represented on a monaural LPCM track that adequately conveys the orchestral dynamics of Tim Souster's (surprisingly compelling) score and maintains enough fidelity to the original recording that you can hear the sound edits between lines of dialogue. The explosive climax is brittle and trebly, though that's par for the course; most of the film is nowhere near loud enough for it to become fatiguing.

First up in the parade of supplements is an audio commentary delivered by novelist Shaun Hutson (yes, Slugs is a literary adaptation), whose involvement with the filmmaking process appears to have been zero. "I've seen films a lot worse than Slugs over the years," Hutson declares, noting at least twice that "it's not Citizen Kane." I threw a pretty hard side-eye in Hutson's direction when he tried to claim that Slugs kicked off the "terror-by-animal subgenre" in horror (Slugs wasn't even published before Cujo, let alone prior to the release of such '70s titles as Frogs, Piranha, Kingdom of the Spiders, and, obviously, Jaws, so, come on, let's be serious about this), but it's hard to accuse the guy of grandstanding when his own assessment of his work goes like this: "There is nothing resembling depth or thought that goes into these books. They are works of entertainment." It's an engaging listen. The second yak-track is contributed by horror journalist, critic, and filmmaker Chris Alexander, with a slightly tinny timbre that sounds like he's delivering it via AM radio. "Apologies to all of you who are listening to this commentary expecting, perhaps, to glean something a little more academic from it," he says. "That's not me." Instead, Alexander delivers extemporaneous oration--he points out continuity errors, he offers commentary on women's underwear, and he notes, accurately, that almost every character in the film is an asshole. He does drop the occasional style note defending Simón as auteur and busts out a theory that Slugs is smuggling a subtext about alcohol addiction. The tone lands, entertainingly enough, somewhere in between scholar/historian and mere superfan.

The longest featurette, "The Lyons Den with Production Supervisor Larry Ann Evans" (HD), spends 21 minutes in Lyons, NY, where much of the picture was shot. Back in the 1980s, Evans was a reader for Simón, digging into English-language novels in search of material for adaptation. She offers a tour of some of the film's locations and dishes anecdotes from the production. Today, Evans has settled in Lyons, where she runs the Museum of Wayne County History--and where her great-grandfather was once, she says, Wayne County sheriff. Hey, you can't make this stuff up.

In "Invasion U.S.A. with Art Director Gonzalo Gonzalo" (12 mins., HD), Gonzalo remembers his and Simón's beginnings in the ad biz, where they learned to work on thrifty budgets before turning to feature films, and testifies to the director's dedication to disgusting images. He describes the minimal set dressings and handmade miniatures that helped them stretch production values on Slugs and divulges new details of the post-intercourse bedroom slug attack that makes that scene seem all the more repulsive. "These frightening ideas came from Piquer," he says, "and were intended to disgust and to scare people. He was very good at that."

Along the same lines, "They Slime, They Ooze, They Kill! With Special Effects Creator Carlo de Marchis" (11 mins., HD) sees the Italian special-effects artist waxing especially enthusiastic about Simón's work, claiming that, after adjusting expectations for budgetary constraints, "Piquer was as good as Spielberg." De Marchis immediately clarifies, "Piquer didn't have a great talent for directing actors," just so you know he's at least somewhat on the level. De Marchis knows his craft, having trained with the great Carlo Rambaldi (who delegated crucial tasks to him on Alien) before moving to Spain to supervise make-up effects on Conan the Barbarian. He cites that great slug-bite scene from early in the film as the most "demanding" one to execute, describes his un-Hollywood technique for making facial molds, and laments the difficulty of directing live slugs.

"Here's Slugs in Your Eye with Actor Emilio Linder" (8 mins., HD) has the Argentine-born thespian discussing the beginnings of his career on Spanish television and his repeated work on Simón's films. He remembers that he had to nail his elaborate death scene in one take, because there was no time for a proper rehearsal with the elaborate gore effects in place. My favourite anecdote? Linder recalls his excitement when he realized that none other than Silvana Mangano (from Bitter Rice), the mother of producer Francesca de Laurentiis, was on set, and points out her brief cameo in the film. "I almost had a heart attack," he says.

Slugs ended up winning the Best Special Effects award at the Goyas, Spain's equivalent of the Oscars. On board here is a vintage 13-minute promo reel, sourced from a battered videotape (upscaled to HD resolution), that pitches the film to Goya voters. The Spanish-language voiceover is unsubtitled, but the reel features some behind-the-scenes footage interspersed with lengthy clips from Slugs. Finally, Arrow has included a mildly tongue-in-cheek trailer (2 mins., SD) whose ominous VO admonishes, "Don't turn on the tap. Don't go in the basement. Steer clear of the sewers. And whatever you do, don't make out while your parents aren't home."