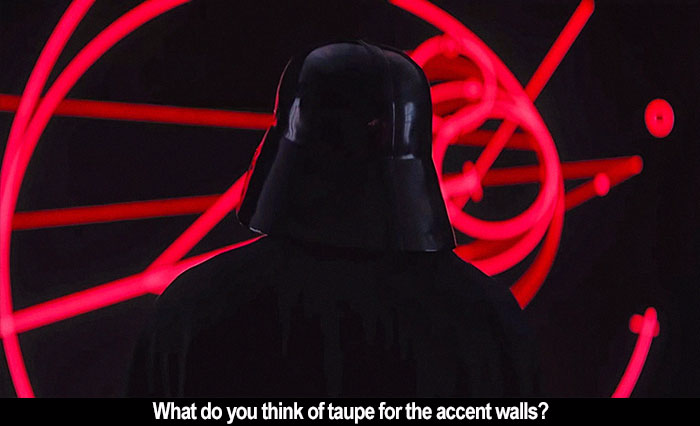 by Walter Chaw A deep cut for Star Wars fanatics, Gareth Edwards's Rogue One: A Star Wars Story also happens to be the single most topical fiction of 2016, talking as it does--in bold, melodramatic strokes befitting a space opera--about the importance of rebellion in the face of fascism. "Order," says Empirical stooge Krennic (Ben Mendelsohn). "Terror," corrects brilliant weapons engineer Galen (Mads Mikkelsen). And the representative of the fascist regime smiles, as though it were all just a matter of semantics, this idea that terror and order are opposite sides of the same devalued coin. He's engaged in a kind of political double-speak, in gaslighting--things that until this year were the scourge of banana republics and other backwards backwaters. The Empire that Krennic represents needs Galen to help them complete their Death Star superweapon, with the '80s-era Reagan/Thatcher rationale that overwhelming destructive deterrents are the only way to truly keep the peace. Galen is compelled to cooperate to keep his daughter, Jyn (Felicity Jones), safe and anonymous in the protection of violent revolutionary Saw (Forest Whitaker). The rest is Jyn's quest to clear her father's name by stealing plans for the Death Star and delivering them to a fractured resistance that isn't entirely sure if it wouldn't be a good idea to give the Empire a chance. You know, maybe they won't do all the things they said they were going to do?

Saw's resistance fighters have entrenched themselves in and around a desert holy city, in the middle of a Jedi temple that's in the process of being stripped for its Kyber crystals. (Readers of Alan Dean Foster's Splinter of the Mind's Eye are having paroxysms of pleasure right now.) They wear robes and cover their faces. When the Empire, with their heavy occupation force, rolls into the centre of the town square, they detonate explosives and snipe at them from hidden placements. They're terrorists dressed in the West's popular conception of what terrorists look like. They're the heroes. Terrorism is patriotism when it's the good guys in defense of holy places. It's complicated. Even more so when the heroes use torture to extract information from one of their prisoners. Jyn is recruited to infiltrate Saw's defenses by Rebel spy Cassian (Diego Luna) and his robot K-2SO (Alan Tudyk), who reminds a great deal of Marvin the Paranoid Android in his passive-aggression and depression. (He's an Imperial Droid reprogrammed by Cassian, and something's been lost in the translation.) The plan is that through Jyn, and then through her relationship to Saw, the Rebels can get to Jyn's father Galen to assassinate him. It's dark.

Helping Cassian and Jyn are Chirrut (Donnie Yen) and Baze (Jiang Wen): the one a blind monk, the other a heavy gunner. Both are former guardians of the lost Jedi temple. When everything they've protected is obliterated, Chirrut asks Baze to tell him if it's all gone. "All gone," Baze says. They represent a displaced caste. They have a sly interplay that's borrowed from an entire tradition of Asian martial arts cinema--the elegant master offsetting the brute. They are each given showcase moments, Yen to work with a staff, Baze a scene of tenderness and then righteousness with a hail of heroic bloodshed. Seeing Asian faces in a franchise that has appropriated Asian motifs for forty years is a very, very big deal, even if having two of China's biggest stars in what will be the biggest film of the year in the U.S. speaks to the two countries' economic symbiosis. Consider, too, that the last member of their team is a defecting Imperial pilot played by UK-born Pakistani actor Riz Ahmed. Do the roll call. This is diversity for a purpose: to tell the story of what happens when multiple ethnicities, pointedly the ones demonized most regularly in the modern discourse (Mexicans, blacks, Middle-Easterners, Chinese, women), work together to undo the evil of a specific, non-inclusive regime. Representations like this matter a great deal. In a very real way, Rogue One (and much of Disney's recent output) is like Disney's WWII propaganda work. In terms you can understand: Stop it before it's too late.

For someone raised on these films, every throwaway line in Rogue One is a delight. Listen as a door closes on the rebel base on Yavin IV as someone calls out to a "Capt. Antilles." It has what is the single best live-action Darth Vader moment ever; strange digital phantoms that are a mistake, I think, but pleasurable for the nostalgic; and various call-outs to the original trilogy that further repair the damage done by the Lucas prequels. When the AT-ACTs attack at the beginning of the bombastic closing sequence, I got emotional. Rogue One has the best space battle of any of the films, as well as the best ground battle. It's beautifully shot and its action is clear--testament to Edwards's bona fides as an action director. It's about self-sacrifice for the greater good and, as in when these films were at their best, it's about human relationships and how positive ones inspire the best in us. There's a speech somewhere in the middle where someone says that when things seem darkest is not when we should surrender, but when we should fight the hardest. The word "hope" is the one bandied about the most. We've elected Presidents on "hope." "Hope," as a concept, is what defines who we wish to be, even as all this venal division and hatred reveals who we are. Hope was the last thing in Pandora's Box; some say it was the only thing. The film sketches its world and ours in terms of light and dark and suggests that it's painful to do the right thing, but it's still the right thing. We're powerful when we aspire to transcend what we are most easily. The picture makes an entreaty to the angels of our better natures.

Rogue One excels in its details of psychic disturbance and societal upheaval. Its team of outsiders--thieves, murderers, assassins, spies--exudes a sense of worldly corruption and bone-deep war-weariness. In a venerable series of films named after "wars," it occurs that this is its first true war film. It's down. Desperate. Doom hangs over the piece because anyone who has seen the first Star Wars knows that no one here gets out alive. Jyn is fascinating because she isn't inquisitive and spunky like Daisy Ridley's Rey, but rather broken, fragile, abandoned repeatedly throughout the course of the story. She's orphaned not once, but thrice, the witness to the murders of both of her parents and her guardian, too. Her strength isn't born of confidence, but of suffering. She doesn't care about the Rebellion so much as she wants to believe that someone loves her, that she hasn't been forgotten. For Cassian, there's a moment where he tells her that not everyone gets to choose to rebel. The impact of a Mexican actor saying this to a British one in a movie about the encroachment of totalitarianism is hard to objectively measure. Looking back at this film from a few years' remove will tell the tale of an entire culture's fear. There are lines in the trailers that reveal a different idea of Jyn as insouciant, flip; the version that makes the final cut is a mess who, in the most affecting beat, recognizes the despair in her compatriots and swallows her own to deliver a few words that motivate them towards what is surely their deaths. At the end of it, when everything has gone wrong and a little has gone right, there's this: "I hope someone's listening," Cassian says. "I believe that they are," Jyn replies. I hope she's right.