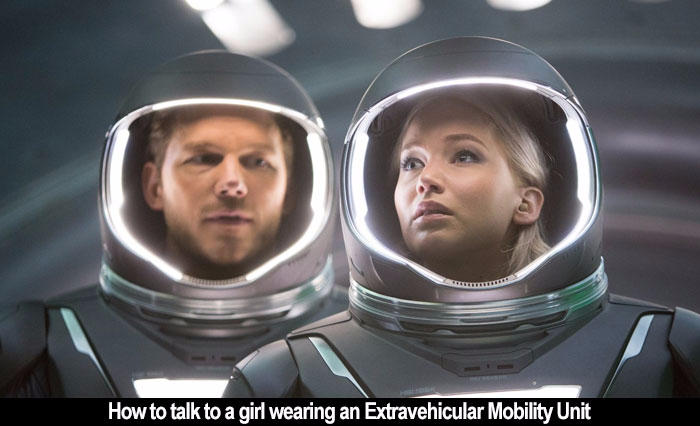 by Walter Chaw The problem with Passengers isn't that it's appalling. The problem with Passengers is that it doesn't have anything to say about being appalling and so proceeds to do stuff with levers and buttons while the lockstep narrative soldiers through to a weird cameo and a happy ending, sort of. Think The Wizard of Oz if it never pulled back the curtain, leaving Dorothy dead and her friends vivisected by an army of newly under-employed flying monkeys on their next impossible mission. It's an artifact that's more interesting, in other words, as an example of corporate groupthink in matters of consumer art--of how Kathleen Kennedy talked about women being "unready" to direct her blockbusters when Morten Tyldum gets the keys to the kingdom for directing mathematicians running around in The Imitation Game (actually, Passengers kind of makes her point), and how retrograde sexual attitudes are still and always the default panic position. Watching it, I was reminded of a brilliant Nell Scovell article published right before the election about how Trump Tower is in a strange state of disrepair: a broken elevator, empty trophy cases, a public garden eternally under construction. There's something about immense hubris we like to see take on water. It's the premise for Douglas Adams's prehistoric PC game "Starship Titanic", where you find yourself the lone entity on a malfunctioning passenger liner. Adams, needless to say, handled it better.

There's a scene in Passengers where Denverite Jim (Chris Pratt) tells his girlfriend Aurora (Jennifer Lawrence) that they're trying to find something important in a giant room full of machinery. "What does it look like?" she asks. He tells her it looks broken. (Fascinatingly, Passengers is what they're looking for.) This is their relationship: Aurora offers an expository opportunity; Jim fills it. It's mansplaining as screenplay tactic--the sort of thing we saw often in old Mars movies with girl space stewardesses asking their dashing bro-stronauts what the meaning of this was and if they can fix things. To that end, Jim is an engineer and Aurora is a writer, the kind who says dreamily that her book is coming along well but she doesn't know what she's got yet...and that she's never written about herself before, which is a strange feeling because, giggle, she's never before done anything interesting or important in her life. She's a dreamgirl for arrested personalities. She's spunky in a non-threatening way, highly sexual and sexualized, good at sports, fun at parties, a good cook, likes your friends--and even after she discovers that you've essentially ordered her out of a catalogue, dooming her dreams and robbing her of self-actualization and motivation, you're still so giving and self-sacrificing that she loves you. That's a problem. A bad problem. It's a normalization of possessive, stalking behaviour. Passengers says that women want to be owned by men. It's for their own good, after all; look at how hysterical Aurora is whenever something gets scary or uncertain. Aurora is Sleeping Beauty's name, isn't it? No wonder this piece-of-shit screenplay was on the blacklist: it's genius-clever.

Passengers is a very good artifact for a specific worldview. An understanding and close read of it tells us a great deal about who we are and why we're here. You would get the same, frankly, from spending a year with a troupe of apes in Borneo. Stanislaw Lem (and Tarkovsky, and then Soderbergh) walked these lines in Solaris and its adaptations. There's a line in the Soderbergh version that has the man expressing how tortured he is by the idea that he might have remembered his dead wife "wrong." That he didn't know her, and so the various iterations manifested for him over the course of the story are all projections of his desires and failures. Passengers is about a guy who is woken up in a sleep-pod malfunction about 90 years ahead of schedule and, in his loneliness, wakes up a hot girl to keep him company. There are countless ways this could have worked. The girl could be nothing like he imagined: a human being, you see, with her own ideas and values. The girl could be depressed, explaining why she'd abandon all of her friends and go off with 5,000 other weirdoes on a one-way trip to a corporate paradise. She's given the requisite hipster disdain of the enterprise, but there she is with her iWatch and designer swimwear, outfitted with "gold" level access to super-mocha macchiatos and omelettes for breakfast. The girl could be useful as something other than an object of desire and, later, an object of male agency. She doesn't even get to figure out that her boyfriend is a perv for herself. At least she's not the black guy (Laurence Fishburne), who's defrosted exactly long enough to get killed.

There's also a robot bartender (Michael Sheen) who is the only anthropomorphized robot on a ship that also has a multi-lingual waiter droid and a quartet of space-age Roombas. He's there to give Aurora the opportunity to show off her mad make-up skills, not to allow for a conversation about the Uncanny Valley and how we're wired to attach ourselves to simulacrums of relationships. There's an information kiosk ripped off from Duncan Jones's Moon. There's lot of production design to go with the lots of Jennifer Lawrence performance. (You want slow-motion pottery smashing? You got it. Emotions!) There's palpable despair because no one can talk about the sickness of the human condition and how our powerlessness to act a certain way sets the stage not for our extinction but for the destruction of our idea of civilization. What's there instead is the usual the ship is about to explode but for the ingenuity and sacrifice of our brave white man. As he's drifting away, he says he's sorry again for being such a dick and that he would have built her a house. Not for nothing are the majority of glimpses we get of the other sleeping passengers black folks. It's like the cameraman at the RNC, finding the one black family in the crowd to make a point about how everything's fine so long as Frosty's in charge. Consider that all would be forgiven--the casting, everything--if Passengers had something on its mind besides making people with antiquated ideas comfortable. It's the feature-length adaptation of that article about how to talk to a girl wearing headphones. Nuke it from space. That's the only way to be sure.