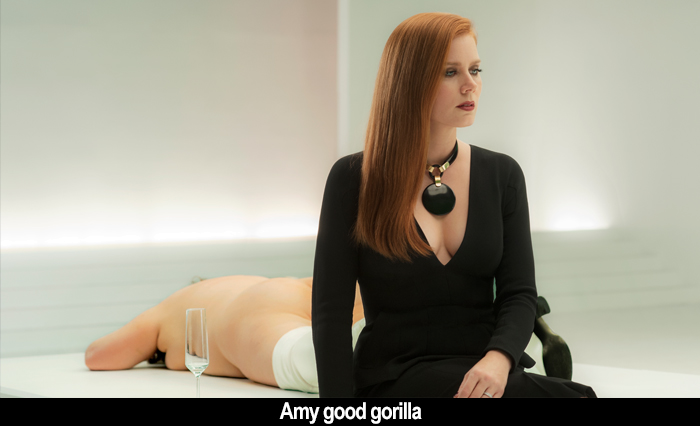 by Walter Chaw It opens with an already-notorious slow-motion consideration of a gallery of morbidly-obese women in tiny cowboy hats, naked and holding sparklers while gyrating to Abel Korzeniowski's moody, derivative score. Not long after, someone will comment how, as an art installation, it's a withering indictment of junk culture, in response to which our ostensible heroine Susan (Amy Adams) intones, "Junk. It's all junk." As self-awareness goes, this is as hollow as the rest of Tom Ford's Nocturnal Animals, a dirge of shallow introspection and sanctified ugliness that is, as it happens, a pretty trenchant critique of the landscape that would normalize a Trump presidency. Consider that the installation isn't "junk" so much as the kind of conversation people of a certain intuition might have about the limitations of media to sell something biology rejects. It's a tentative salvo into the nature/nurture debate and the extent to which popular culture can influence the innate. The answer? It can, a little. More often, it merely gratifies/reflects the base. Calling it "junk" reveals a specific attitude that the only thing obese women are capable of representing is over-consumption and, in the sparklers and hats, a sad sort of patriotism. Tom Ford has a message. I get it. It's gotten away from you. The signifier is greater than the sign.

What Susan means, though, is that her life of unimaginable privilege is junk. She gave up too much when, as a budding debutante with stars in her eyes, she betrayed first husband Eddie (Jake Gyllenhaal), because he was a writer, a dreamer, an artist you know. At a crossroads in her marriage to second husband Hutton (Armie Hammer), a product of the upper crust who gave her the life of boring, airless wealth to which she felt entitled, she receives a parcel from Eddie containing Eddie's latest novel, dedicated to her and bearing the picture's title. It's one of those dimestore gialli where a guy gets his wife and daughter raped and murdered, then pursues justice in the West Texas big empty. In the book's narrative, which Ford offers as one of three parallel story-/timelines, dad Tony (Jake again) partners up with terminally-ill Texas Marshall Bobby (Michael Shannon, sick of everyone's shit) to stem the rising tide Tommy Lee Jones spoke of in No Country for Old Men. Reading the book has the effect on Susan of causing her to relive her early days with Eddie: the passion and the uncertainty, the road unspooling out ahead of them into the dark. She's had an abortion, did I mention? It's the type of movie where she's punished for it. Fair to wonder at some point why it is that Adams herself has chosen so often to work with monsters.

Anyway, the southern noir storyline reminds a lot of the horrific pathology of The Killer Inside Me, balanced as it is between a certain voyeuristic monumentalism and an almost complete lack of irony. For a film that aspires as desperately as it does to high art, Nocturnal Animals is studiously blunt. Ford may say that's the point. What's interesting is that the reaction to it has been remarkably consistent: Most everything I've read on it talks about its remove, how emotionless and uninvolving it is despite the horror of what it depicts, whether it be rape and murder or the disintegration of a marriage. The picture suffers no argument, in other words: it has one point to make and makes it with straw men and women. The rich are detached from reality, while artists are scruffy dreamers in leather-elbowed cardigans. The rich live on the coast; the artist lives in Austin. The murderous backwoods nabobs reside in all the spaces between. The grizzled lawman is tired of seeing the bad guys get off on technicalities. The rich woman with the heart of an artist pines for the version of herself who stood up to her haughty mother (Laura Linney, typecast) to marry the rake. Rich is bad. Poor is noble. Consumption is empty. Production is fulsome. Eddie writes books ultimately about himself, Ford is careful to articulate, while all Susan can do is fuck other men and kill Eddie's baby. When allegory is this literal, it's Passion Play. Medieval.

Ford's worldview is backwards in exactly the way his disengaged, elite variety of worldview tends to be. His bogey, the book-within-the-movie's monstrous Ray (Aaron Taylor-Johnson), is the distillation of class paranoia. He's ignorant but cunning, vile in the manner of a Rob Zombie villain. He's verbal but can't be reasoned with. He wants your women and your vintage Mercedes and will ruin them both. Ray is the crystallization of the problem from a specific point-of-view: the great unwashed that happens to turn out to vote. He has two sidekicks. One is the brute, the other the simpleton. Arrayed against them are the wealthy, the philosophers, the fetishists, as removed as they can remove themselves from bestial desires and instincts. They have an affected, intellectual coldness. For Ford, there are only two kinds of sex: the kind you negotiate that results in neglected children; and rape. When run off the road by lowlifes in rural Texas, reason and understanding won't work. They never do. Nocturnal Animals is reductive sociology. It's what one side believes of the other, and becomes evidence by the fact of it of what the other side believes in return. Some will make something of the final scene, which finds Susan waiting at a restaurant for a dinner date who may never arrive. What I make of it is that Ford is aware he's at one cool remove to the world as it is, and that it's that inability to connect that has made everything frightening and incomprehensible. It's a river he can't, well, ford. The problem with Nocturnal Animals is it's a stupid, obvious movie that's accidentally about something. When the dust settles, it'll be one of the dog-ears on this hell we're in.