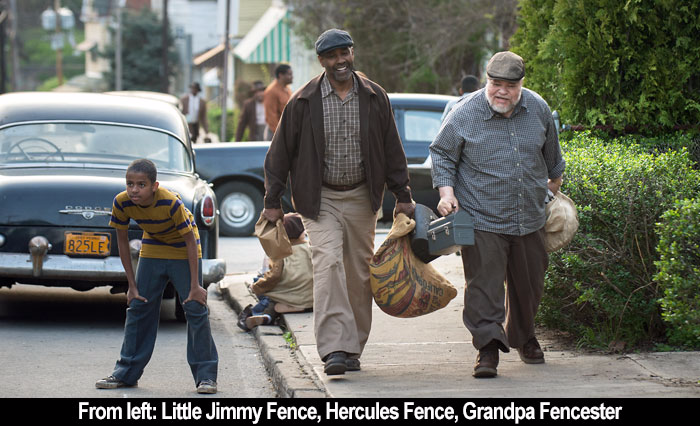 by Walter Chaw Denzel Washington's Fences is movies as medicine. Not the sugar-coated, easy-to-swallow kind--the castor oil/barium enema kind. The toxic-herbal-brew kind my mom used to try to make me drink but, you know, I'd rather be sick. Fences is based on August Wilson's venerated, Pulitzer- and Tony-winning play, which has been in the works as a feature since 1987, when Eddie Murphy bought the rights and then couldn't bring it to fruition after Wilson publicly pronounced that he would be displeased if the material found its way into the hands of anyone but a black director. Paramount was given a list of names that included the person who should have directed this movie, Spike Lee, but ultimately they offered it to a white guy, Barry Levinson. Levinson passed because, among other things, Wilson's own adaptation of his play did not seem to him to successfully bridge the gulf between theatre and cinema. If Levinson was smart enough to pass because the script was ponderous and stagebound, that explains why Lee was never attached to the project: Lee is way smarter than Levinson. It's the impossible errand, this Fences thing. Wilson, being the figure he is, was not the sort of person whose opinion you ignored, nor the sort of person whose work you rewrote. So the project died. And then Denzel Washington was brought on board, insisted on doing a Broadway run to live inside the play for a while, and now, five years after that, here's his Fences. And it's just exactly as godawful as you'd expect it to be.

Washington's direction is earnest. It's all slow push-ins and monumental tableaux. Consider the moment after Troy (Washington) receives some very bad news about his mistress and the camera cuts from this overwrought monologue, delivered with raised fist to a thunderstorm, to Troy's son Cory (Jovan Adepo) comforting his mother Rose (Viola Davis) in a frame so gravid and iconic it seems silly. It is silly. It's the only trick in the film, this motion from insufferable and maudlin to suffocatingly self-serious. That's one part of the problem. The other part of the problem is that the material is entirely instructive and prescribed. Every moment, every plot point is designed as an introduction to a lecture on a Serious Social Issue. It has that Barton Fink feeling. When Troy denies his son's dreams of becoming a football player, it's to talk about segregation in professional sports and the glass ceiling he fears will break his son, as it's broken him.

On second thought, that's not the other part of the problem. I've never seen Fences on stage. I imagine in those claustrophobic, physical confines, its spittle-inflected monologues are overpowering and trenchant. But just like there's never been a good filmed version of Arthur Miller's "Death of a Salesman", this Fences, at the one cool remove of film, is easy to regard with detachment and cynicism. It would be work to suture to it. I never for a moment forgot that Denzel was giving one hell of a Performance. And a lot of it, too. No, the other part of the problem is that "Fences" the play is a holy relic inviolate. Any attempt to adapt it is doomed to failure unless those doing the adapting are willing to tear it apart and reconstitute it to respect the limitations and demands of a different medium. Imagine a cinematic adaptation of the Mona Lisa that's just a shot of the Mona Lisa running for two hours. Maybe with the camera dollying in and out for dramatic effect. Maybe prop it in someone's backyard to "open it up." That's Fences.

If you don't know, Fences is about trashman Troy reliving his lost glories and visiting his frustrations on long-suffering Rose and lonesome Cory. He owns a house because his brother, Gabriel (Mykelti Williamson, who should strongly consider not playing this role again), devastatingly brain-injured in the war, received a payout. This causes Troy some measure of guilt and loss of self-esteem. Troy is the portrait of a demeaned black America--a reading that's critically close to suggesting that handouts have hollowed out an entire culture. It leads to a couple of key confrontations between Troy and Cory in which Troy tries to show his boy the importance of self-reliance as he defends a plot of land given him by his brother's sacrifice. In case you miss it, Wilson has his characters speak it literally. There's a lesson here, too, about how social class and incarceration have defined the black experience in America. Under-employment, too. Substance abuse? You bet. Broken households? Of course. The title refers to the fence that Troy wants to build on his long weekends of drinking and pontificating. He wants to use interior wood (get it?), and he wants to build it to keep the Grim Reaper out, you see. Rose wants him to build it so she can keep her family in. Troy wants Cory to help, but Cory wants to escape. The fence is many fences. Try to keep up.

Along the way, Troy emerges as the quintessential Prestigious Drama protagonist: unlikeable, pathetic, full of impotence and rage. It's been the fashion since John Osbourne's "Look Back in Anger", and Fences is the second quasi spiritual-homage to Osbourne's "angry young man" disaffection this 2016 season alongside Tom Ford's Nocturnal Animals. Put the two together to see, at last, the race divide healed with a single, self-pitying, sociopathic yawp at the unrecoverable wasteland of this indifferent world, insuperably fenced. Because Wilson is like unto God, adaptations of his work are hamstrung and fixed in their moment and not to any other moment. The reason there are good Shakespeare adaptations is because Shakespeare is neither gospel nor, for the most part, a sociopolitical minefield. Though Fences runs slightly over two hours, it's packed with about eight hours of unedited self-righteousness. More to the point, to dilute that self-righteousness in any little bit would be seen as sacrilege. A violation at best, at worst a salvo in the race/culture war.

I like to imagine the reason Wilson wanted a black director at the helm of this picture was not because of these obvious and nettling notions of equality and opportunity, but because he understood that the only person with the cachet to adapt the play and not just document it like it was some holy sacrament would be another black man. Washington declines the challenge, save for one exquisite scene. At the end, Cory shares a moment on a stoop with his illegitimate baby sister. They sing a song and Cory feels, for the first time, the loss of the father he wishes he had rather than the father he did. It's emotional. It's true. It doesn't feel rehearsed and it's not narrated. It's the only moment like it in the film. And it's devastated immediately by Gabriel bungling in with his mentally-disabled burlesque trying to play Taps on a broken trumpet. It's a symbol. Get it? Gabriel with his trumpet? Man, you ain't even listening.