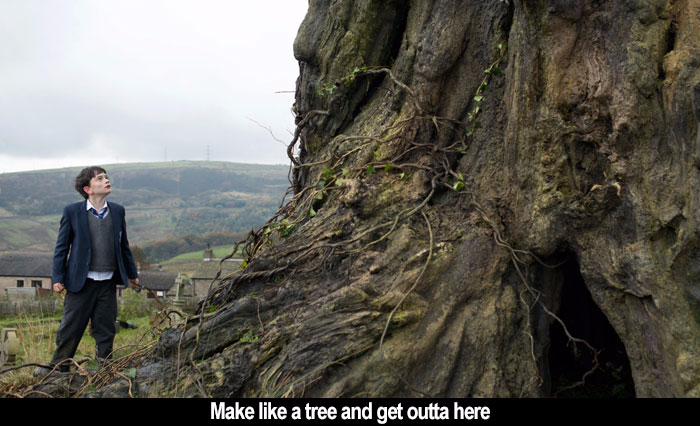 by Walter Chaw Tears are easy when the subject is the loss of a loved one. They come even when you don't particularly like the vehicle that inspires them. In the case of J.A. Bayona's A Monster Calls, the tears are for the most part earned by its generally uncompromising nature and the elegance of its animated interludes. They're so good, in fact, that I spent much of the movie's remainder wishing it were all animated in the same style, which is cribbed from artist Jim Kay's watercolour illustrations for the Patrick Ness novel upon which the film is based. The animated sequences are representations of the titular monster's stories. Voiced by Liam Neeson, he has three of them to tell little Conor (though only two are animated), with the expectation that when he's through, the boy will tell one back to him. Conor (Lewis MacDougall) has summoned the monster (a cross between Groot and an Ent), he thinks, so that the monster can heal Conor's ailing mother (Felicity Jones). Alas, the monster serves a different purpose. The animated portions remind in feeling and abstraction of Brad Bird's incomparable The Iron Giant--a film that is itself based around the death of a loved one and the need for the survivors to recover. The live-action portions, the best of them, remind of Bernard Rose's melancholic Paperhouse, but the sum is a bit less than its parts.

What's great about A Monster Calls is its unwillingness to offer platitudes in the face of unrecoverable losses. The monster's stories are about how complicated people are and how essentially unfair the world is. The first tells of a prince, who is basically good but does awful things, and his stepmother, who is probably evil but was at least never evil to him. The second tells of the failure of faith and medicine, equally, and the intersection of the two; the film doesn't gild any of its messages. The only hope it offers is that others have survived uncertainty and grief and so, likely, will Conor. Young MacDougall is exceptional and Neeson's voice is magisterial. Their scenes together are as timeless as intended. Would that the film had kept to examining the ways that fables/myths/fairytales have of addressing the harshness of the universe. The brilliance of The Iron Giant and the key to its immortality is that it's about how everything is broken. Everything. And there are still individuals who have the energy to fight. It, too, deals with the importance of archetypes and doesn't gild any lilies, either.

What's only passable about A Monster Calls is its depiction of domestic life for Conor, who is given to fits of dangerous rage and has a grandmother (Sigourney Weaver, distinctly miscast) who is cold and irredeemably distant. The picture's respectable, the way it doesn't allow for a warm reconciliation; life doesn't often provide that sort of comfort. But it seems as gratuitous as the bullying subplot where Conor adopts the persona of his monster at one point and puts another boy in the hospital. The tonal shift is jarring: It divides attention and Conor's misbehavior lands less as the product of his difficulty dealing with mortality than as a disturbed kid with issues brushed aside by the film's pat resolution. It's disappointing, because although A Monster Calls seems at pains to present the idea that the world is ambiguous, said ambiguity only feels fresh, grave, in the monster's stories, while the grimness of the framing device is strained, the grandmother's iciness contrived. I think that effort was spent here to make the real world as messy as the one in the stories, but without the distance afforded by animation (and perhaps just owing to the repetitiveness of Ken Loach-ian familial miserabilist melodramas), ambiguity has poetry in the one setting, and mere familiarity in the other. A Monster Calls is ultimately interesting because it makes a strong case for animation as the more effective vehicle for certain kinds of narrative. It's the medium that makes something like Grave of the Fireflies what it is--ditto The Iron Giant and this year's The Red Turtle. The overall impact of A Monster Calls is that it's an effective weepie, yet there are moments where it demonstrates that it could have been a good deal more than that.