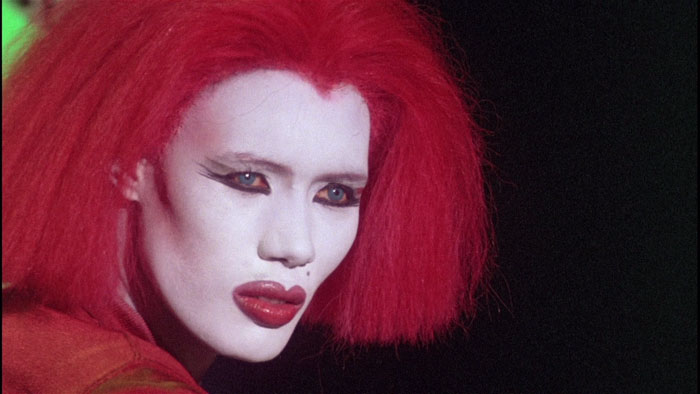 by Bryant Frazer In concept a little bit After Hours and a little bit An American Werewolf in London, Vamp attempts to transplant some New York cool into a story set in the L.A. underground, where a downtown strip club is staffed by lithesome vampires who prey on losers and outsiders yearning for companionship in the lonesome city. Vamp isn't scary, though it's fairly stylish, thanks in large part to Grace Jones, who flew into Hollywood with an entourage (including artists Keith Haring, Andy Warhol, and Richard Bernstein) to play Katrina, an exotic dancer with an appetite for flesh. While the film is pleasantly weird whenever she's on screen, that's not much of the time. The bulk of it is a laid-back assemblage of moderately clever ideas--a bunch of clockwork gears that never mesh into anything much.

The story, for what it's worth, is nonsensical. Keith and AJ (Chris Makepeace and Robert Rusler) are a couple of college students trying to bypass some dopey hazing rituals at the local Dipsa Phi chapter by doing them the apparently huge service of finding a stripper for a party. (Why anybody at a frat house would have trouble hiring a stripper is a question left unaddressed.) They hit the road on a three-hour drive to the nearest big-city strip club accompanied by Duncan (Gedde Watanabe), a dorky horndog who lets them use his car and is especially enthusiastic about the evening's entertainment. At around the 22-minute mark, Katrina hits the stage, wild-eyed, and performs a show-stopping number--in whiteface!--that leaves jaws agape. AJ heads backstage, where Katrina seduces then attacks him with animalistic fury. The rest of the film mainly follows Keith, who picks up perky blonde Allison (Dedee Pfeiffer) as a love interest before fleeing into the sewers to attempt an escape from L.A.

To the extent that Vamp works, it gets by on spectacle. Though nobody's idea of a great actress, Jones, for instance, is definitely a performer. She has literally no dialogue but looks great writhing on stage in body paint by Haring and a barely-there metal bikini. Later on, she's almost comically ferocious in a wildly overbuilt dental appliance. First-time writer-director Richard Wenk was also lucky to connect with DP Elliot Davis (Twilight, The Birth of a Nation), at the time a prolific camera operator looking for his break as a cinematographer. Davis compensated for the film's low budget with an outré magenta-and-green lighting scheme that grabs hold and doesn't let go. Yet Wenk doesn't manage to make the film as spooky or sexy as it wants to be; Vamp is competent, but it's blandly competent. Wenk makes sure his script has some gags and some action and even a touch of romance, and a few of the jokes land: I snorted aloud when a city bus showed up in the nick of time as Keith and Allison were fleeing vampires in pursuit and Keith cheered, "Thank god for mass transit," because obviously a city bus isn't going to show up at the appropriate time to rescue anybody in L.A.--and certainly not in the middle of the night. Alas, it's rare that Vamp manages to capture such a human moment.

Part of the problem is its two protagonists. Makepeace and Rusler are enthusiastic but slick and over-rehearsed, and spend too much time mugging. The supporting actors run circles around them. Contrast their douchey college boys with Jones's immortal Egyptian queen, Billy Drago's albino street gangster, or Sandy Baron's regretful club owner (he wanted to see Vegas once, just once) and ask yourself who you'd rather spend more time with. Keith and AJ are absolutely the least interesting characters here, yet it's supposed to come as a relief when Keith and his cocktail waitress/stripper sweetheart share a kiss at daybreak? Give me a break--this movie's sexual panic in the face of Jones's non-verbal Nubian bombshell (coupled with its explicit mockery of Duncan's failure, as an Asian-American, to earn the genuine friendship of his smug white classmates) absolutely smacks of racist fantasy, even if Jones herself helps draw this particular cartoon. There's a reason why horror movies so often position a Final Girl as the sole survivor of their mayhem: We root for women in horror because we know that they're vulnerable, that they're so often targets, and that it's a big deal to turn the tables on your oppressor. And because Vamp has little time for any of its characters who are not walking, talking personifications of white male privilege, it has aged particularly poorly. 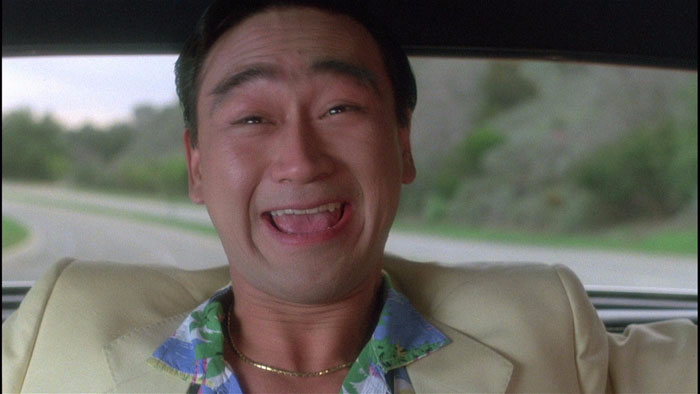 THE BLU-RAY DISC
Vamp is not uninteresting as a 1980s time capsule, and Arrow Video brings it to Blu-ray Disc with characteristic tender loving care. They remain one of the only Blu-ray labels that seems content to let an '80s movie look like an '80s movie, and Vamp shows up in HiDef with a blissfully grainy, blessedly detailed transfer (at an HD-native 1.77:1 aspect ratio) that appears uncompromised by digital dust-busting. Colour is fairly saturated and gets more so as the story progresses, which was likely by design. Contrast and dynamic range are impressive with decent blacks, free of crushing; only the occasional blasted-out highlight (as on Jones's face when the bright lights hit her white make-up) made me wonder if some clipping could have been avoided. The monaural audio, presented in uncompressed PCM, is unremarkable in terms of fidelity. It lacks much in the way of dynamics except when the score dominates, adding a little oomph in the low end, and there is some audible hiss in quieter passages, but it sounds appropriate for the film's vintage and ably showcases its sometimes surprisingly layered mix. (Sound mixer Mark Ulano worked on a lot of 1980s genre movies before going on to win an Oscar for Titanic.)

Extras are not extensive, but get the job done. "One of Those Nights: The Making of Vamp" (45 mins., HD) is an exceptionally entertaining retrospective that combines the usual talking-head interviews with behind-the-scenes footage and photographs. Though nobody really dishes any dirt, everyone involved seems to be speaking pretty candidly, remembering the experience with genuine fondness. (Davis, Drago, Makepeace, Pfeiffer, Rusler, Watanabe, and Wenk are among the participants.) Wenk is very clear about the kind of project Vamp was, with producer Don Borchers telling Wenk he could write and direct the film as long as his script featured strippers, college students, and vampires. Both pre-production and post-production were ridiculously abbreviated processes; while Wenk had time to rehearse with his actors, the script came together in no time flat, and on the back end he was only given three-and-a-half weeks to cut it. (He does say those six magic words that appear somewhere in the extras on so many of these Blu-rays of mediocre horror movies from the '80s: "I wasn't a big horror fan.") Davis speaks eloquently about his thoughtful visual approach to the film, thoroughly explaining how elements in the screenplay and his feelings towards the genre led him to make practical decisions he hoped would set Vamp apart. The wildest stories revolve around Jones (who does not appear), who apparently brought her vibrator to the set and performed in an ADR session completely nude. Makepeace remembers being very pleased that the movie turned him into a hero in time for its third act and remarks, wistfully, that he wishes more viewers had a chance to see "that side" of him, which made me tear up a little. (Shut up.)

Clocking in at just over 22 minutes is Dracula Bites the Big Apple, a 16mm short film (transferred in SD) directed by Wenk in 1979 about a vampire skulking around and stalking prey in New York City. It's...not great, but the "Dancing in the Moonlight" musical number is something to behold, as it makes use of real NYC locations like the top of the Empire State Building and the old Studio 54, complete with a cameo by owner Steve Rubell. A six-minute "blooper reel," transferred to Blu-ray from videotape at SD resolution, features the expected behind-the-scenes shenanigans, as well as extended footage of three of the film's striptease routines. (A chunk of it is underscored, for some reason, with "I Don't Care Anymore" by Phil Collins.) And almost seven minutes of SD rehearsal footage, originally shot on video, is included, showing Wenk repeatedly running through the film's key vampire-bite sequence--ostensibly working out the blocking and checking camera angles, but perhaps just enjoying the sensation of being straddled and licked, over and over again, by a highly energetic and entirely cooperative Jones.

Also on board are two trailers, each running two minutes in length, plus seven TV spots at 30 seconds apiece. All are presented in SD from video sources. A reversible sleeve with newly-commissioned artwork and a booklet containing a critical essay by Cullen Gallagher were not provided for review. 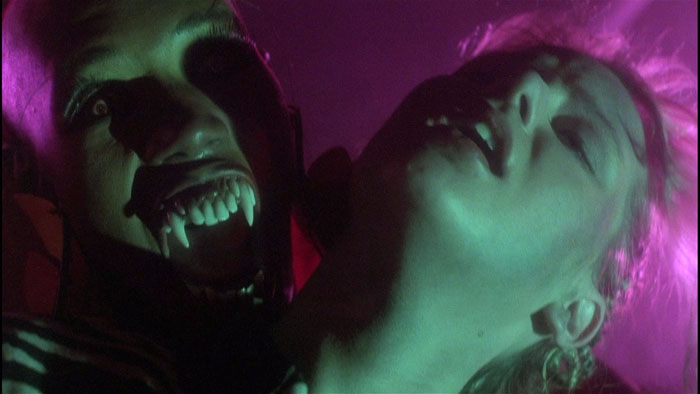