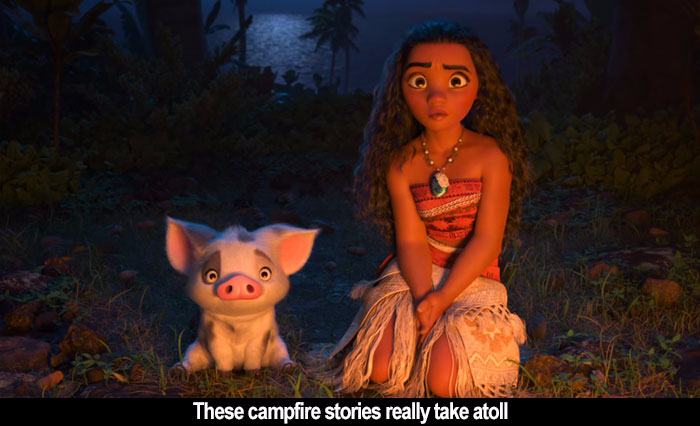 by Walter Chaw Arguably, the only place it really matters in terms of the diversity tango in Disney's new animated musical Moana is in the songwriting and voice-acting, and so although there are only white people directing (four credited directors) and writing (eight credited scenarists), find Opetaia Foa'i and Lin-Manuel Miranda behind the music and Dwayne Johnson and Auli'i Cravalho behind the Pacific Islander characters. This is progress. Also progress is what seems, to this non-Polynesian, like a real effort to not appropriate a culture so much as represent its mythology, tied as it must be to a narrative about a young woman, Moana (Cravalho), a stout Disney heroine of that certain mold for whom adventure calls, declaring her independence from the patriarchy. We've seen her before, is what I'm saying, but she's neither sexualized nor given an aspirational mate/therapeutic marriage. Progress. I'll take it. There's even a moment where demigod Maui (Johnson) makes a crack about Moana being in the Disney canon. Progress? Self-awareness, at least. I'll take that, too. What's unfortunate is that for everything that's very good about the film, there's something very familiar. The argument should probably be made that familiarity is the sugar that helps the medicine of its progressive elements go down. It worked for The Force Awakens.

It seems that long ago Maui, in his unbridled hubris, stole the heart of a Goddess to barter for the adulation of humanity. He's identified as a trickster god in this mythos. In action, he most resembles the Greeks' Prometheus, even boasting during his signature song, "You're Welcome," of bringing fire to man. Like Prometheus, Maui is punished with exile. Like Prometheus again, it takes the agency of a hero to free him. That would be Moana, a chieftain's daughter slotted to be the leader of their isolated community (even her predetermined fate is one of indentured leadership) who yearns to explore what the world has to offer beyond the reef that breaks just past their shore. This leads to a frankly beautiful sequence in which Moana discovers that her people had always been voyagers before their courage flagged sometime in the near past. The song there, "We Know the Way." is as close as Disney has ever come to a genuinely foreign conceit, because, you know, "Colors of the Wind" ain't cuttin' it. The film in the Disney universe Moana most resembles is Hercules; that's praise. (I like Hercules quite a lot.) Moana's call to action is famine--which was also Oedipus's call to action, and, like Oedipus, Moana identifies the source of the pestilence, in a roundabout way, as her denial of her own identity and agency. She steals a boat in pursuit of Maui.

There's something uncomfortable, in the post-election environment, about Maui as he initially presents himself. His breed of unexamined braggadocio and megalomaniacal narcissism just doesn't go down like it used to. The film eventually allows Maui his redemption, but it takes a long time to feel better about the character--his little abuses of Moana, including the Waterworld thing of repeatedly tossing her off the catamaran, feel less harmless now. Maybe they should never have felt harmless. This is likely progress as well. What works best about Moana are its moments of cultural peculiarity. The creation myths and quests have their parallels, but the Kakamora (coconut pirates--that is, pirates who are coconuts, not pirates of coconuts) are an exceptional invention, both visually stunning and delightfully odd. Likewise a vain hermit crab voiced by Jemaine Clement that provides the piece its insouciant surreality. Best, maybe, is a resolution that doesn't depend on the slaying of the film's volcanic antagonist but rather recognition and reconciliation. Given Disney's legacy of "justified" murder and righteous, retributive slaughter, Moana's message of cultural expansion, learning personal history, and seeking to understand in lieu of endeavouring to destroy is well-taken. If, at the end, the action sequences (save the Kakamora assault) are mundane and forgettable and too much of it is only fine, Moana has going for it the momentum of a ruling culture doing its best to allow itself to be subsumed by a minority culture, even as it has miles to go before it sleeps.