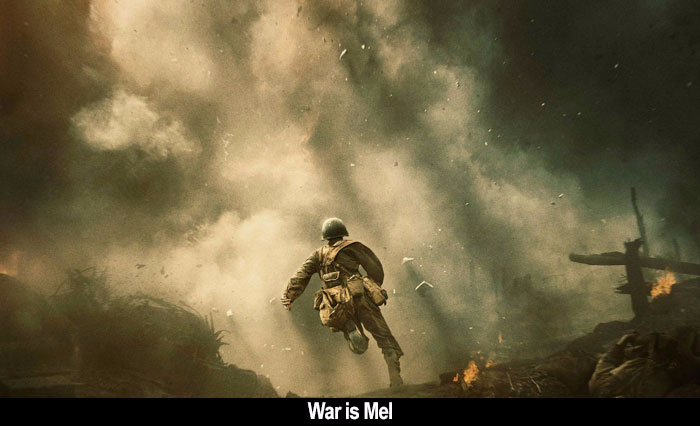 by Walter Chaw Martin Scorsese and Mel Gibson are our two most prominent plainly and explicitly Catholic directors. Because Scorsese is the kind of Catholic he is, his films are about questioning faith. Because Mel Gibson is insane, his films aren't. As a result of that, and somewhat unexpectedly, Gibson is the single best case for the auteur theory working in the United States. As the originator and chief benefactor of The Passion of the Christ (the best and worst film of 2004), he can officially make whatever movie he wants, and with Hacksaw Ridge (and Apocalypto before that) he's gone ahead and done just that. Mel Gibson is the single best case for a lot of things. In Hacksaw Ridge, he tells the true story of Desmond Doss (Andrew Garfield), a troubled, severely-abused young Virginian who enlists in WWII as a conscientious objector, refusing to touch a gun, dedicating himself to saving folks as a combat medic. It's essentially a superhero origin story opening the same weekend as another (Dr. Strange)--both films dealing with faith and the consequences of betraying said faith. In Dr. Strange, directed by openly Christian Scott Derrickson, bargaining with morality results in dreadful and unforeseen consequences. In Hacksaw Ridge, because Gibson's religious fervour burns so bright and erratic, all such niceties and ambiguity burn away in allegorical hellfire and literal rains of blood. He's long threatened a sequel to Passion. Here, he's delivered one.

Gibson tromps through the early scenes of Doss learning the dread toll of violence, falling in love with his nurse wife (Teresa Palmer) in a series of treacly meet-cutes and standard adorable relationship developments, and coming up against mean drill sergeant Howell (Vince Vaughan) in a Basic Training sequence that serves to remind there will probably never be a better one than Full Metal Jacket's. Indeed, Hacksaw Ridge is structured in the same way, with the first half showing the evolution of mild-mannered civilian into killing machine, setting the place for the charnel of the second half. Except in Gibson's vision, superhero Jesus Boy remains ever stalwart in his convictions, those being that he will never touch a gun--not even to earn leave to marry his beloved--or work on the Sabbath. In the end, he does both of these things, touching off a metatextual debate about what the Bible says that is every bit as circular and self-defeating as every other inconsistency argued with pages selected from an old book. Whatever Seventh Day Adventists say, Mel Gibson has created rules for this universe that he defies, dilutes, and ultimately rewards for their defilement because it suits his purposes to do so without explanation. He's done a fine job, in other words, of becoming a metaphor for the unreason of religious zealotry.

Set that aside for a second and Hacksaw Ridge can, and should, be appreciated as an exceptionally-helmed war film. It's essentially an exploitation flick, like Passion and Apocalypto, reminding that the best Catholic Churches have the cruciforms with the goriest Christs. Truffaut once said that it's impossible to make an anti-war movie that depicts war. I'd argue that stuff like Isao Takahata's Grave of the Fireflies or even Clint Eastwood's Letters from Iwo Jima does a fair to excellent job at it, but Truffaut has a point. War is bracing to watch. Gibson, though, hasn't really tried to make an anti-war film. The feeling of Hacksaw Ridge is that war is sort of a good thing because it allows the monstrous father (Hugo Weaving) access to the plot twist that delivers his son into war, giving the son (Son?) the opportunity to save a lot of good American boys who have been mowed down by the evil and duplicitous Nips. On the Sabbath, Doss is asked to lead the battered men of his battalion and a battalion of reinforcements into battle because they see him now as Joan of Arc and refuse to fight without him. This is after a long night where Doss, single-handedly, saves 75 men from the battleground when everyone else has fled. It was an unparalleled act of valour rewarded with the Congressional Medal of Honor, never before and never again given to a conscientious objector. This renders him, in the eyes of his "brothers," a "false idol." Which isn't a problem for Doss. It's not a problem for him to "work" on the Sabbath, either, nor is it an issue for him to lob a live grenade or pick up a rifle to roll into a blanket that he uses to drag Sgt. Howell to safety as Howell murders the enemy with bursts from his firearm. All is fair. It's like Superman using a kryptonite weapon.

I mention all of these transgressions not because I disagree with Doss saving American lives in Okinawa, but because Hacksaw Ridge has gone to extraordinary lengths to expound on Doss's pious superiority, and Gibson seems to care about that less than making another Christ story, beginning with extreme torture and suffering for Doss and ending with not one, not two, but three scenes in which a former denier becomes a devout acolyte. "I've never, never ever never never ever never, underestimated someone like I have you, Doss. Can you forgive me?" The answer to this, of course, is that it's not for Doss to forgive anyone. He doesn't say that, mind. Is that a problem? It is. But it isn't for Gibson, whose religion supersedes consistency, reason, humility. This film is less about Doss than it is a celebration and accidental critique of blind faith: how it demonizes the Other, creates hero mythologies from an entire culture built on victimhood, and relishes the coming of the Apocalypse as part of God's will.

I don't object to that as much as I object to how familiar and boring the first half of the movie is. I quite like Gibson as a filmmaker. He's the director most obviously working through his fear and ugly shit since Polanski, and Hitchcock before him. No conversation about Hacksaw Ridge should avoid the tape-captured accusations of domestic abuse levelled against him--nor the drunken anti-Semitism, nor the Holocaust-denier father who essentially founded the Gibsons' peculiar branch of Catholic Traditionalism that explicitly dismisses Vatican II. Gibson is a true auteur, a unicorn in the modern conversation. His films are singular in their medieval belief systems founded in thick sheets of blood and viscera, elevating martyrs to unquestioned, righteous avatars of fury and vengeance and setting the world as a post-lapsarian Eden swarming with fire and serpents. Hacksaw Ridge is essential viewing. It demands to be understood. Understanding both its failures and its attraction is the only chance we really have.