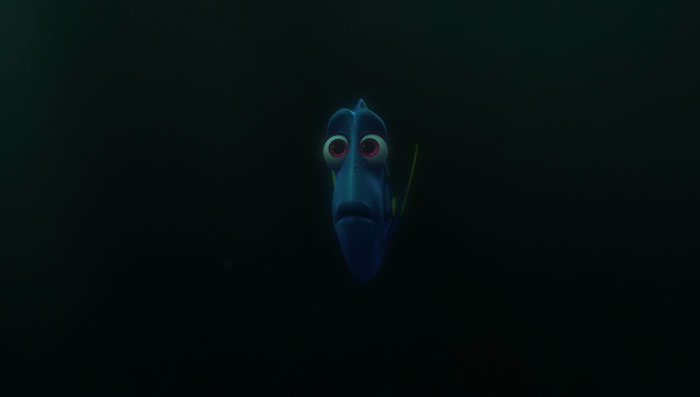 by Walter Chaw Credit is due Pixar and writer-director Andrew Stanton (co-directing here with Angus MacLane) for wanting to right what I don't know anybody really perceived as a wrong. I remember thinking when I first saw Finding Nemo that Dory's inability to retain short-term memories was a product of her species. In the new Finding Dory, it's revealed to indeed be a mental disability, one that her parents (voiced by Eugene Levy and Diane Keaton) worry over a great deal in a series of flashbacks. They create coping mechanisms for their daughter. They devise a literal shell game so that when Dory (Ellen DeGeneres) inevitably gets lost, she can find her way back home. It's an interesting tactic to take, this mild scolding that what was funny at first is in fact a debilitating, dangerous disorder. And a good portion of the film looks for ways to valorize Dory's condition, to avoid making her the butt of jokes or an object of pity. For the most part, it does this by surrounding her with characters who also have a disability: Hank (Ed O'Neill), an octopus that's lost an arm ("Septipus!" says Dory, "I can't remember, but I can count!"); and Destiny (Kaitlin Olson), a hopelessly myopic whale shark. Lest we forget, Nemo (Hayden Rolence, taking over from Alexander Gould) has a deformed fin, something he flaps at dad Marlin (Albert Brooks) after Marlin says something disparaging about Dory's memory issue.

It all gives one that mild feeling of having a finger wagged at them for 105 gorgeously-animated minutes (though a key distended sequence is unappetizingly shot in a bilge pipe through a puke-green filter), a feeling that we shouldn't laugh at adorable Dory's plucky optimism in the face of a terrible defect, but rather emulate it. Call Stanton the anti-Brad Bird, in that way. Everybody's incredible, you cad. Late in the game--or in the middle of the game (it only seems late because the pacing's off)--Marlin and Nemo find themselves in a rough spot and try putting themselves in the mindset of "What Would Dory Do?". An interesting thing to insert Dory into a popular "Christ" meme, made more so because what Dory would do is impulsive, disorganized, illogical, maybe deadly. It's psychotic behaviour, since Dory has a problem. Marlin, on the other hand, is repeatedly chastised for being careful. I watched Finding Dory with my kids; I don't think acting heedlessly and hoping for the best is a lesson I want them to internalize. Even the picture has doubts when Dory grows fearful and anxious the more she grapples with the idea that her disability has put herself and her loved ones in constant peril and misery. If the first film is about coming to terms with the horror of the world, this sequel is about coming to terms with the horror of the self. It's about tolerating difference and hoping that doesn't kill you. The final sequence is a horrific one involving a runaway truck on a packed turnpike, and it's not much fun.

Finding Dory is nothing if not intriguingly perverse. Hank is a mimic who will remind Pixar fans of the bad guy from Monsters, Inc.. He's so terrified of the open ocean that he conspires to steal a transfer tag at the marine institute where he's housed in order to continue living in captivity. It leads to a moment at the end (the real end this time) where a truck full of captive fish chant "release, release, release" in favour of Hank running away to freedom with Dory, ignoring that they're essentially expressing their own captivity. This is a subversion of the first film's ending, in which the hero sidekicks wind up in plastic baggies floating on the ocean, doomed to certain death. But Finding Dory cheats. It provides the feel-good Spielberg closer, all the way through to Hank's decision, made inexplicably and suddenly, to betray his carefully-crafted character, just because it's time to inaugurate the last plot point. (It betrays an ideological tension between Pixar's penchant for trending towards dark and Disney's allergy to the same, perhaps.) Anyway, that's the new stuff. The old stuff is returning favourites like the stoner turtles and the long-suffering school teacher Mr. Ray; there's even another gag involving mollusks inking in fear that now leads to another extraordinarily-laboured celebration of Dory's suicidal rashness. You feel a little bad laughing. I don't know what I expected from Finding Dory, but it wasn't a rap across the knuckles. Originally published: June 20, 2016.

THE BLU-RAY DISC
by Bill Chambers There isn't much left to say about Pixar's Blu-ray transfers, which have been perfected in tandem with the company's animation over the years. It'd be bigger news if one turned up a dud, but today is not that day. The only surprise is that Finding Dory has been opened up to the HD-native aspect ratio of 1.78:1 after playing theatrically at 1.85:1; presumably it was matted in cinemas or composed with its TV afterlife in mind. As in Finding Nemo, definition is more glamorously diffuse in the underwater scenes, though the depth and intricacy of the image always astounds, with above-the-surface details displaying a glassy photorealism. Colours are vibrant and tonally complex, and contrast is dynamic while exhibiting a wide, fluid range. Some light banding once again leads me to question a bitrate needlessly capped at 24 Mbps (the 97-minute feature should take up more than the 19.2 GB it does), especially since there's enough room left on the second disc for all the extras glutted onto the first.

7.1 DTS-HD MA and 5.1 DTS-HD HR tracks grace the feature, and toggling between them on my 5.1 setup I frankly detected little difference; it would seem that downmixing and lossy (albeit hi-res) compression produce much the same results. This is a gentle soundmix with persuasive ambience throughout. Pixar once again puts a light foot on the pedal when it comes to the LFE channel, seemingly sensitive to the impact deep bass might have on younger viewers. Another listening option teams director Andrew Stanton, co-director Angus MacLane, and producer Lindsey Collins for a feature-length commentary. They reflect on the impetus for doing the sequel, a 3-D reissue of Finding Nemo in 2011 that left Stanton, who hadn't seen it in seven years, worried for Dory. To be honest, the remaining bonus material explicates a lot of the pertinent info in this yakker, but the three prove pleasant, articulate, and cinephilic (the opening shot was inspired by Annie Hall), and there are tangents about the appearances Crush and Sigourney Weaver make in the film that you won't hear elsewhere.

The "Feature" platter's video-based supplements begin with Allan Barillaro's Piper (6 mins., HD; ***½/****), the incredibly lifelike tale of a baby bird on the beach trying to keep up with her elders. She has to overcome her fear of the tide to eat like the others, and ends up underwater with a snail in much the same boat. It's so lovely and humane, I wonder if there's a place left for it in this world. I also continue to hope that Pixar does a funny short again someday. A/V specs are in line with Finding Dory. A smattering of featurettes begins with "The Octopus That Nearly Broke Pixar" (9 mins., HD), about the ordeal of animating Hank, who due to his 4000 joints required a degree of labour that taxed the Pixar system to its limits. The title unfortunately says so much that everything thereafter comes across as a tad redundant. "What Were We Talking About?" (5 mins., HD) finds editor Axel Geddes succinctly summing up both the central challenge of Finding Dory and subject matter of this segment: "How do you have a main character who can't remember what their drive is?" Producer Lindsey Collins--whose four-year-old daughter played Baby Dory, and charmingly misread her mantra as "I suffer from short-term remember-y loss" (it stuck)--touches with tantalizing brevity on how they didn't want Dory's impairment to seem like something curable. "Animation & Acting" (7 mins., HD) is the star-studded, cast-praising role call; Diane Keaton is exactly as overdressed in the recording studio as you'd expect.

In "Marine Life Interviews" (2 mins.), Finding Dory's various supporting players are asked to say a few words about the title character. It's for kids, but the faux-nature-doc aesthetic will sail over their head and perhaps baffle a few adults as well. A director, Ross Haldane Stevenson, is credited. Meanwhile, "Casual Carpool" (4 mins.) riffs on "Comedians in Cars Getting Coffee", but with Stanton driving Albert Brooks, Ty Burrell, and Eugene Levy to work. Eventually they pick up Burrell's "Modern Family" co-star, Ed O'Neill. "This bit is going to ruin my career," sighs Brooks, who does the heavy-lifting herein; it's kind of funny if you're a fan of his. Disney starlet Jenna Ortega, "Actor & Ocean Life Enthusiast," touts Pixar's dedication to verisimilitude on a tour of the Monterey Bay Aquarium in an untitled 3-minute piece (indeed, we see that the interiors of the place were faithfully recreated along with the marine animals), while "Creature Features" (3 mins.) finds the voice cast delivering curious fish facts. For the second time on this disc, Brooks talks about the clownfish's ability to change sex. 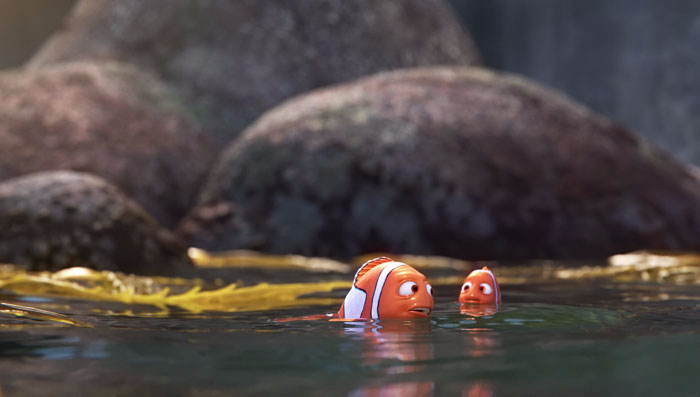 The aforementioned "Bonus" BD is dedicated to supplementary material, with a 50-minute block of deleted scenes comprising the bulk of it. The HD content breaks down as follows:

"Skating & Sketching with Jason Deamer" (4m)
Circa Toy Story, skateboarding alongside Pixar employees gave Deamer the opportunity to work there--as a furniture-mover. But during his breaks, he would doodle faces on coffee cups and, in Good Will Hunting fashion, was eventually caught and made a character designer. Here, he offers tips on designing characters, the first lesson being learn how to actually draw the species you want to caricature.

"Dory's Theme" (5m)
Composer Thomas Newman, music editor Bill Bernstein, and director Andrew Stanton discuss the titular theme as well as more general aspects of the score. Stanton tries and mostly fails to get Newman to articulate a process that for him sounds by and large intuitive, yet still I wished this piece was longer.

"Rough Day on the Reef" (1 min.)
A montage of animation glitches (not outtakes). Haven't seen one of these in a while.

"Finding Nemo as Told by Disney Emoji" (3m)
The title says it all, but may not convey how old and childless this made me feel.

"Fish Schticks" (4m)
The sort of thing that would typically play under the closing credits, with the characters engaging in bits of silent comedy. (What little dialogue there is stems from Finding Dory proper.) Stevenson again directs.

Deleted Scenes
Stanton provides an optional one-minute introduction to this section as well as individual intros throughout. He claims the problem with the Pixar system is that production is such a fun, collaborative experience, it's easy to lose sight of whether something's legitimately working or just engendering a good time. With one major exception (see below), these deleted scenes are thumbnail animatics with scratch dialogue.

Rounding out the second platter are four custom "living aquariums"--souped-up, Pixar-fied versions of Aquarium Channel fare destined to make fans of young children and old potheads--plus trailers for Finding Dory from around the globe (i.e., America, Japan, Spain, and Russia) that mostly reveal the homogenization of international advertising. In the deep recesses of the keepcase reside DVD and downloadable copies of the film.