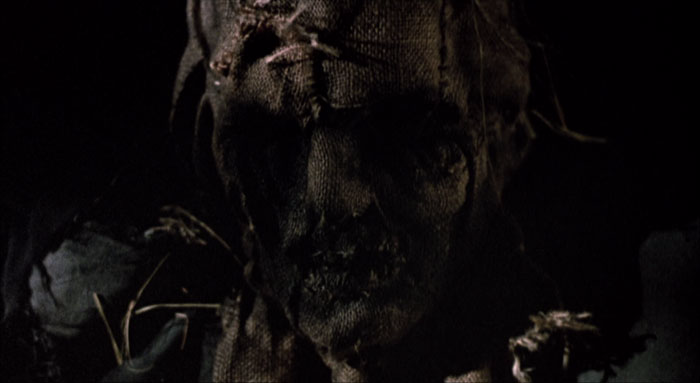 by Walter Chaw Terrible in that plucky way that earnest shoestring products can be terrible, William Wesley's Scarecrows has a few memorable gore moments and a lot of bad dialogue, execrable performances, and senseless exposition. I saw this movie on VHS in high school as part of my weekend ritual of renting a shelf and staying up all night shotgunning the dregs. This led to a few remarkable discoveries, of course--and it led to discoveries like this as well. The hook of Scarecrows is a strong one, taking the somehow-underutilized image of the scarecrow in the horror genre and making a grand bogey of it, but the result is essentially a zombie-cum-spam-in-a-cabin flick featuring a paramilitary group fresh off a heist engaged in a supernatural backcountry rigmarole. Still, the film's greatest crime isn't a bad premise but that it's boring. Really boring. Mainly it's boring because every character acts like an idiot at all times, making it hard to muster much in the way of stakes. That's also why Scarecrows isn't scary or tense, and because I think it wasn't long enough and they ran out of money, there are tons of filler close-ups of scarecrows just sort of, you know, hanging there. Kuleshov or something.

What happens is one of the paramilitary dudes, Bert (B.J. Turner), takes all the money he and his mates have stolen and jumps out of a hijacked airplane, D.B. Cooper-style, into a haunted cornfield. The hijacked are a grizzled pilot (David James Campbell) and his daughter Kellie (Victoria Christian); the rest don't matter. The passengers parachute out, a couple do, in pursuit of Bert while Daddy and Kellie land the plane somehow, somewhere, and join them in an abandoned house. But lo, here's Bert, and he's dead, I guess, but stuffed full of straw and money. The scarecrows did it! Can you believe the luck? Scarecrows. Disbelieving all evidence that they're in the presence of, if not the paranormal then "demonic demons," as one of them exclaims, our jolly antiheroes proceed to stop in the middle of the cornfield to gather handfuls of twenties, smack into scarecrows dangling there quietly, and separate, the better to be picked off one by one. There are some neat lo-fi gore effects (or at least the idea of lo-fi gore effects that we see the aftermath of), and there's lots of shouting and running around.

At one point, it becomes clear that Scarecrows is a Predator rip-off, complete with civilian hostage/confederate. Later, it's an Aliens rip-off, complete with noble sacrifice and mid-air resolution. Mostly it's a cult classic among scarecrow fetishists who also love that TV movie The Dark Night of the Scarecrow. Credit Wesley with a good setting (used to better effect in Stan Winston's Pumpkinhead, though), and credit special-effects guy Norman Cabrera and his team, who create cool monsters the film doesn't know what to do with. Scarecrows is one of those movies saved by nostalgia and relative novelty. Kudos to it for garnering an army of defenders who seem to congregate around B-movies that are funny accidentally, seem earnest in their creation, and deliver slightly better-than-expected goods there at the end. Jim Wynorski, eat your heart out.

THE BLU-RAY DISC
Scream Factory presents Scarecrows on Blu in a lovely 1.85:1, 1080p presentation that is, all things considered, superb. Aside from some crushed blacks and clipped whites (it's not outrageous to assume that Scream pumped up the exposure to help make this dark film a bit more legible), the transfer, with its patina of grain and mild speckling (both positive and negative), is pleasantly evocative of a 35mm print after a few showings. I love it. Shadow detail is impressive enough and the colouring is lush if exaggerated in that Scream Factory way. If Scarecrows could look better, it couldn't look much better. The 5.1 DTS-HD MA track opens up the original 2.0 Ultra-Stereo mix (also on board in DTS-HD MA)--planting radio transmissions and other sound fx in the rear discretes--but boasts no real increase in fidelity. For the kind of movie this is, there are actually few jump scares.

Moderated by Rob Galluzzo, director/co-writer Wesley and producer Cami Winikoff record the first of two commentary tracks, which hums with anecdotes and good humour, especially where it concerns a harrowing anecdote about how the pair were scheduled for a plane they missed that subsequently crashed. I like how Galluzzo only expresses horror when they say the negative for Scarecrows was with them at the time and would have been incinerated in the accident. Now that's a fan. Wesley opines joking-not-jokingly that a dog on screen was a better actor than Vernon, then divulges that Vernon supplied a significant portion of the film's startup funds. There's a story here, folks; I wonder what it is. Anyway, Wesley and Winikoff prove able, energetic raconteurs (going so far as to provide the hidden backstory for the piece), and Galluzzo does a great job of keeping the flow going. I like, too, the moment Winikoff reveals that she scored additional funding for the film with a "little polka dot dress."

Hop over to the other similarly sterling yakker to hear DP Peter Deming (later cinematographer for David Lynch, Wes Craven, and Sam Raimi), co-screenwriter Richard Jefferies, and composer Terry Plumeri go into all aspects of the production, such as the possibility of a remake, the Chris Walas film The Vagrant (also written by Jefferies), and how the film was so very angry. Jefferies tells a rambling, fascinating story of how he was ghost-writing a Michael Jackson movie when he was contacted about the project, which led somehow to a four-film collaboration with Mel Brooks, including an unmade sequel to The Fly starring Geena Davis. Plumeri offers a fascinating account of his preference for orchestral scores and how he imagined a romantic theme for images (excised) of our heroes digging money out of the skull of one of their buddies. This is how music creates subtext. Too cool. This second yak-track is non-specific, it bears mentioning--essentially it comprises three long Q&As recorded independently and played underneath the film. Michael Felsher does moderating duties this time. I'm not a fan of Scarecrows, but the disc is worth it for the commentaries. How often can you say something like that?

Video-based extras begin with "The Last Straw" (17 mins., HD), in which Cabrera discusses the gags in the film and laments that a lovingly-designed mechanical scarecrow head had to get blown up. He's an affable sort and should be proud of his work here. "Cornfield Commando" (9 mins., HD) interviews Ted Vernon, who admits he would rather like to kill director Wesley. Nevertheless, he's very proud to have been a part of Scarecrows. Animated storyboards (4 mins.) and a stills gallery join the theatrical trailer (2 mins., HD) in rounding out the platter.