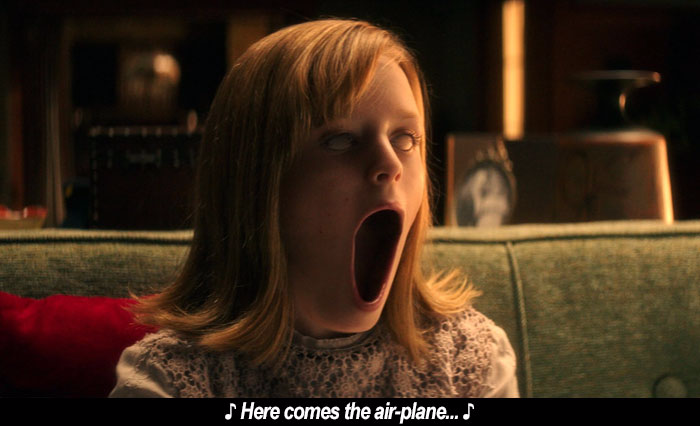 by Walter Chaw Because distribution is the ridiculous trash fire it is sometimes, Mike Flanagan, through circumstance, misadventure, and good old-fashioned industriousness, had three films ready for release in 2016: Hush, Before I Wake, and Ouija: Origin of Evil (hereafter Ouija 2). I've only seen Hush and Ouija 2 thus far--it looks like Before I Wake has been delayed yet again--but I can say that when taken with his first two films, the moody Absentia and the excellent Oculus, Flanagan is already at the forefront of the new American horror revolution. His movies are drum-tight. He isn't afraid of the high-concept. He makes smart use of minimal exposition and narrative ellipsis, and he embraces the inexplicable and the uncanny. Better, there is at work in Flanagan's pictures this undercurrent of grief, tied together with the thought that perhaps these intimations of immortality are bound snug with the dementing tortures of unimaginable loss. The supernatural is mainly considered, after all, upon the death of loved ones, and so it is that Ouija 2's Alice (Elizabeth Reaser) makes a living with her two young daughters, Lina (Annalise Basso) and Doris (Lulu Wilson), as a fake spirit medium giving succour to the recently bereaved.

Consider two scenes: the first a dinner date between Alice and a new widower, Father Tom (Henry Thomas); the other a moment after something terrible happens and Alice tells Lina it wasn't her fault. In the first, there's yearning and attraction muted by propriety and sadness. It's been three years since Alice's husband died, but she hasn't gotten over it. At the end of the dinner, Father Tom says "maybe in another life," and we've spent so much time in the company of Alice and her loneliness that your heart breaks for them. In the second aforementioned scene, there is this true expression of a mother's love in protecting her daughter from recrimination. Between these two beats, little Doris becomes a familiar character in films like this: Playing with something she shouldn't (the titular Ouija Board, just like Regan in The Exorcist), she invites something into her body that's malevolent and makes her speak and write in different tongues and timbres. Alice isn't so much horrified by Doris's transformation as she is delighted that her mother's legitimate psychic gifts might have "skipped a generation" and given them this chance to speak with her dead husband. It all sort of makes sense to Alice. Except that it doesn't make sense.

Older sister Lina experiences first love, and Flanagan treats a first kiss with exactly the exhilaration he should. "My mother will be home soon," Lina tells her suitor. "I thought we had an hour?" he says. "I don't want to take any chances," she insists. It's not a come-on. She's asking for a kiss, nothing more. He gives it to her and then leaves her to her quiet elation. But Doris stops him at the front door. She tells him what it feels like to be strangled to death. To paraphrase, it's like a match lit in your chest, and the burning turns to ice. "It's the last thing you feel," she says. It's a delightful moment. There are several of these. There's what Father Tom says after coming up from investigating something in the basement. There's what he sees when he can't seem to get the basement door open for a second. Ouija 2 is two-thirds a wonderfully-observed piece about grieving--one not unlike The Shining in that you spend much of it unsure if the horrors are even supernatural. The last third is of the more typical variety, redeemed by a final shot that pays homage to Exorcist III. Even the familiar is effective, given the care that Flanagan has invested in his characters and the sad trajectory of their lives. There's a strong lesson embedded in there--whole treatises could be devoted on something so simple as how stories are more compelling when they're peopled with fleshed-out characters involved in universal struggles. Flanagan is fantastic. So is Ouija: Origin of Evil.