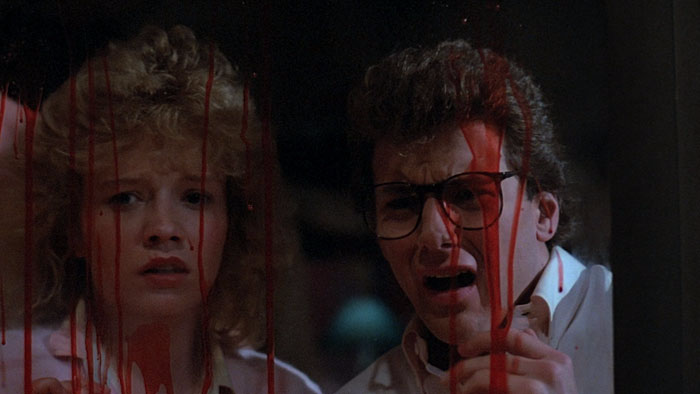 by Bryant Frazer Chopping Mall is not the shopping-centre slasher-movie its title suggests. Here's what you really need to know: It includes a scene where a woman clad in light-blue Playboy panties runs screaming through the spacious halls of the Sherman Oaks Galleria in a hail of laser fire, chased by a killer robot resembling a cross between a Dalek from "Doctor Who" and Number Five from Short Circuit. The opening sequence features Paul Bartel and Mary Woronov in a cameo as their Paul and Mary Bland characters from the cult classic Eating Raoul. The always-game Barbara Crampton, who had just shot Re-Animator, takes her top off. And, like the maraschino cherry on top of a soft-serve strawberry sundae, the great character actor Dick Miller plays a crusty janitor who trash-talks one of the malevolent tin-can tyrants like a Jet giving the finger to Officer Krupke.

Made at a time when Jim Wynorski had to work for a living instead of making nonsense movies with titles like Cleavagefield, The Hills Have Thighs, and The Devil Wears Nada, Chopping Mall is essentially a killer-robot flick staged as Fast Times at Ridgemont High meets Dawn of the Dead. A group of eight teenage retail workers decides for some reason that a mall furniture store would be a great place for a private all-night sexy-time party, even though the mall in question has recently been upgraded with a nonhuman security force. Military-grade blast doors seal the place off from the outside world in the wee small hours as robots patrol the halls. Of course, the 'bots aren't supposed to harass store employees, but it turns out that all it takes is one random lightning strike to turn a good army of killer robots bad. 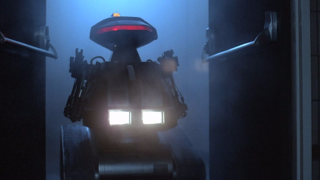 Distributed by Roger Corman's Concorde Pictures, 1986's Chopping Mall (the title was changed from Killbots) was only the second movie by co-writer-director Wynorski, who made his debut in 1984 with The Lost Empire, about a pulchritudinous trio of warrior babes facing off against Angus Scrimm from Phantasm over a magical trinket. (Wynorski likes to joke that he didn't audition women for that film if their cup size was smaller than 36D.) It's safe to say that Chopping Mall is at least slightly more ambitious, starting with the script. Overzealous approaches to law enforcement were a ripe target for satire in the Reagan era, and the lowbrow Chopping Mall has the genuine distinction of beating the more effective RoboCop to theatres by more than a year. But instead of advancing a genuinely sly or subversive perspective on the subject, Wynorski sticks to B-movie basics. There are some nice stunts and a few legitimate laughs, some of them having to do with the juxtaposition of action-movie clichés against the consumer-culture trappings of shopping-malls, others simply leaning on campy self-awareness. ("I guess I'm just not used to being chased around a mall in the middle of the night by killer robots," someone whines at one point.) The remote-controlled robots are pretty impressive pieces of hardware. And someone's head explodes, just because. In other words, Chopping Mall has its funny bits and its sexy bits and its gory bits, and it crams them all into a lean 76 minutes of screentime that doesn't demand anyone's full attention.

The ensemble is a generic group of middle-of-the-road B-movie types, though Crampton stands out in an ebullient performance and Wynorski obviously adores his frizzy-haired Final Girl, upon whom his camera gazes lovingly. She's played by former soap star Kelli Maroney (Night of the Comet), who became a staple of his films for the next five years, and it's to Chopping Mall's great credit that it allows her to earn an actual victory over her cybernetic stalkers rather than simply cheating death by getting lucky or being rescued by a dude at the last minute. DP Tom Richmond shoots it all as well as he could, presumably, on a slim budget; the film looks cheap yet not indifferently so, and it wasn't long before Richmond broke out of the basement and started delivering quality work on films like The Chocolate War, Killing Zoe, and Nick & Norah's Infinite Playlist. For Wynorski, however, Chopping Mall is a career highlight. It wasn't long before he doubled-down on softcore horror spoofs and spent most of the next twenty years giving tits-and-ass a bad name. Bottom line, although Chopping Mall isn't an especially well-made film, it's a diverting-enough time capsule for 1980s nostalgists and schlock connoisseurs. 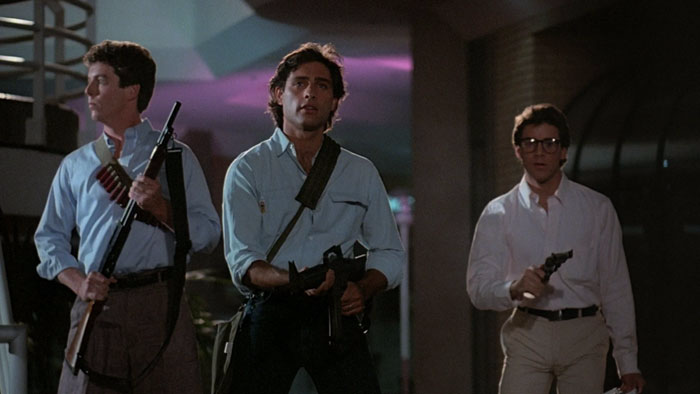 THE BLU-RAY DISC
The new Vestron Video Collector's Series Blu-ray release from Lionsgate will appeal to both camps, presenting the film itself in a fresh 1.78:1, 1080p transfer that represents the feel of a mid-1980s 35mm film print fairly accurately. Colours are a little muted and lean towards pastels as opposed to saturated primaries, and the picture is somewhat dark--not a bad look for a movie that takes place mainly in the overnight period. Contrast is nice, with quite a bit of detail visible in the dimmest parts of the image; there is no crushing or clipping to speak of. The source is mostly clean, though a few shots during the opening credits have visible damage. (As "cigarette burns" are present at reel changes, this was apparently not sourced from the camera negative.) Though film grain is present, dust-busting/noise-reduction efforts have left the picture a mite soft overall, and I'd love to see what it looked like before the processing. Average video bitrate is around 28 Mbps--which is respectable, although it could have been cranked way up without running the risk of overfilling the disc.

Audio is offered in two-channel monaural DTS-HD MA, and it's decent for its provenance, if a bit brighter than I would like. Still, dialogue is clean and clear, the occasionally cacophonous sound fx don't completely wreck the soundscape, and the thumping music track has reasonable dynamics, including some solid bass notes. If you dig Chuck Cirino's score, be sure to flip over to the isolated score track, where a much fuller and more listenable stereo version lives.

The disc contains no fewer than three audio commentaries, starting with a new yakker featuring Wynorski, Mitchell, and Maroney. It's your usual assortment of production anecdotes, but Wynorski is pretty good at screen-specific observation, cluing us in on which shots required the most work behind the scenes--like the tracking shot through the furniture store that forced stagehands to move furniture into place and stay out of frame as the camera rolled backwards through the set. ("This is a great documentary of what the '80s looked like," Wynorski notes.) A second track has writers Nathaniel Thompson from Mondo Digital and Ryan Turek, now a development exec at Blumhouse Productions, bringing a sophisticated fan's perspective to the BD, talking about what it was like for budding horror buffs to discover low-budget horror movies on the shelves of Blockbuster Video stores around the country or during broadcasts of USA Network's "Up All Night" program blocks back in the 1980s. They give good commentary, chatting about this and that without leaving much in the way of dead air, and the fact that the conversation frequently ranges way beyond Chopping Mall to consider other films and pop-culture markers from the era (programmable robot toys, FANGORIA magazine, the long, slow demise of Radio Shack) is frankly a relief given the sheer quantity of content here. The third yak-track, featuring Wynorski and Mitchell by themselves, dates back to the 2004 DVD release and covers a lot of the same ground as the first one.

An assortment of video featurettes comes courtesy Mitchell, who produced and directed the lot of them, and their combined running time exceeds that of Chopping Mall. Participants in the proceedings include Mitchell, Wynorski, Mitchell, Maroney, Crampton, co-stars John Terlesky, Russell Todd, and Nick Segal, "killbot" designer Robert Short, and composer Chuck Cirino. As you might expect from this kind of package, these documentaries are full of fond reminiscences. The party gets started with "Back to the Mall: Interviews with the Victims and Makers" (26 mins., HD), a retrospective making-of full of the usual fond anecdotes about the production. There's an emphasis on the actors, who discuss what was expected of them on set--such as doing their own stunts--and Wynorski's willingness to let them improvise. Wynorski and Mitchell discuss their screenwriting process, which apparently involved lots of rancour and compromise, though both seem happy with the result. "A lot of the 'dead teenager' movies at the time, the kids were just running around screaming, waving their arms, panicking all the time," Mitchell says. "Well, damnit, the movie I was gonna be working on they were gonna at least try and defend themselves."

"Talkin' About... the Killbots with Robot Creator Robert Short" (12 mins., HD) focuses on the robots, built by Short--a special-effects specialist who had built miniatures for Star Trek: The Motion Picture and Firefox--from original designs sketched by Mitchell and based in part on the robots from 1954's Gog. Short recounts the iteration process that finally resulted in the distinctively malevolent design seen in the film, and the actors weigh in on how much they loved the finished products. A vintage standard-def doc, "Chopping Mall: Creating the Killbots" (16 mins.), goes into even more detail on the same subject with Short, Wynorski, and Mitchell.

In "Scoring Chopping Mall: A Conversation with Composer Chuck Cirino" (11 mins., HD), the musician reflects on working largely unsupervised on his John Carpenter-inflected electronic score, developing his original theme in different directions, and filling Wynorski's request for a music cue he calls "The Ecstasy of Robots" that was meant as a spaghetti-western reference. "I really love the synthetic choirs out there," Cirino muses. "People think they're horrible, but in Chopping Mall they're the inner voice of a robot screaming."

"Chopping Chopping Mall: A Conversation with Editor Leslie Rosenthal" (8 mins., HD) is exactly what it sounds like--an interview with Chopping Mall's editor, who muses, "It's sort of like MAD MAGAZINE meets Porky's." She explains that she trimmed the film to the bone while varying her editorial technique from set-piece to set-piece to keep the pace from getting monotonous. She says she took the job of editing a Dick Miller walk-on very seriously and talks about editing the exploding-head shot tightly to avoid showing the unexploded dummy head for even a single frame. "I'm surprised it worked as well as it did," Rosenthal says, and she ain't the only one.

"An Army of One: A Visit with Chopping Mall's Biggest Fan: Carl Sampieri" (6 mins., HD) is devoted to Long Island resident Sampieri, who calls this "one of those movies that changed my life." Superfan Sampieri's main claim to fame appears to be his ownership of Chopping Mall paraphernalia, among it the only surviving working robot from the film (it graces the inside of his garage), some original artwork from the movie's pre-production and its abortive Killbots campaign, and an autograph-bedecked clapboard from the shoot.

In "Chopping Mall: The Lost Scene" (3 mins., HD), Mitchell and Wynorski recall another bit that involved Bartel and Woronov's characters sneaking a horse into the mall. (There are shots of the screenplay pages so that viewers can read the dialogue.) Finally, "The Robot Speaks! Ten Questions with the Killbot" (2 mins., HD) is a throwaway positing a Q&A with one of the Killbots, who responds in Wynorski's voice, calling the filmmakers "rookies" and opining charmingly that the actors were "OK," especially when seen "from behind." The last piece of memorabilia on the BD is a standard-def "trailer" (0:53) that seems to have been made for the video market: it's too short to be a theatrical preview and too gory to be intended for television. 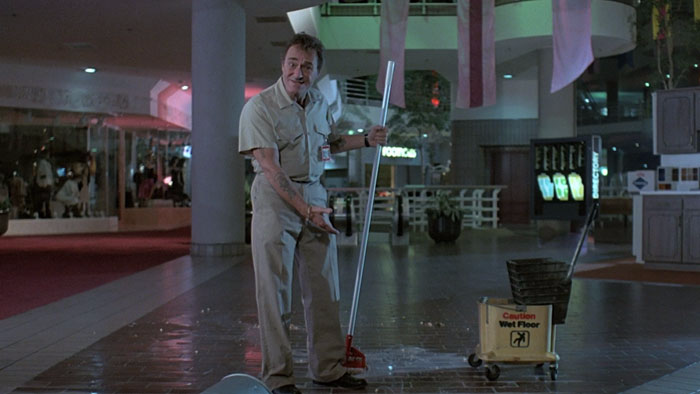