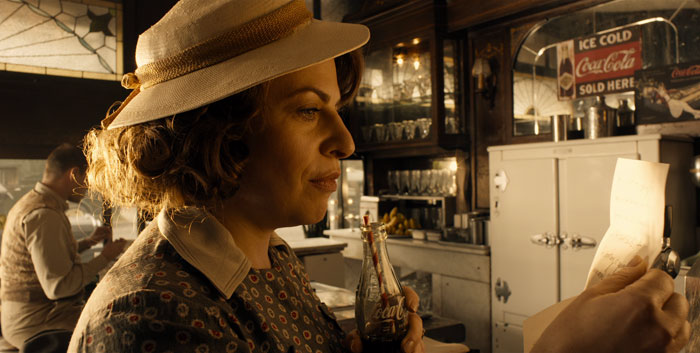 by Angelo Muredda Woody Allen can't seem to make two consecutive films worth thinking about. Despite an abysmal trailer, pre-emptively dismantled online as insensitive or worse amidst revelations about his personal crimes, 2015's Irrational Man proved a surprisingly gritty respite from Allen's nostalgic euro-tourist cinema of the Aughts. True to its maker's aversion to progress, though, its follow-up Café Society is practically a jukebox-musical treatment of Allen's old (which is to say tired) hits, from the ennui L.A. inspires in native (which is to say white) New Yorkers to the beauty of other periods that aren't the present to romances strained under the weight of vast age discrepancies. Beautifully-lensed and defiantly dumb, it's another testament to Allen's surprisingly incremental growth as a filmmaker in his seventies, at the same time as he continues to atrophy as a writer.

Jesse Eisenberg tries his hand once again as an Allen surrogate, this time in 1930s period garb. He stars as Bobby Dorfman, a naive young jeweller's son and New Yorker who turns up his nose at both the family business and the petty crime of his brother Ben (Corey Stoll) in order to spread his wings on the west coast under the arm's-length tutelage of his gruff uncle, Phil (Steve Carell), a Hollywood power broker and talent agent. Not much for family, Phil offloads his nephew onto his fetching but down-to-earth personal assistant Vonnie (Kristen Stewart). They bond over their mutual love of movies and equal disdain for the beautiful people in their orbit, coming closer together and in sight of a future full of domestic bliss in New York until the identity of Vonnie's secret ex-boyfriend threatens to send Bobby back home empty-handed.

Allen is often on solid ground with projects that mine his interest in the intersection of morality and ethnicity, and Café Society coasts along for a while as a narrative position paper on different forms of Jewish-American ascendance, both to culture and to business, in 1930s America. Although he hits a few shaky comic notes in a thread involving Ben's mob efforts back home (narrated in their sister's letters to Bobby, her sunny disposition ironically juxtaposed against Ben's onscreen body count), Allen's work of tracing Bobby and Ben's diverging--and then converging--paths towards respectability pays off, saying something relatively trenchant about the parallel hustles of Hollywood and organized crime. There's a kind of mean, unashamedly sexist insight, too, in Allen's use of the radiantly white Blake Lively as Bobby's eventual gentile bride, whom he treats as a collector's item and instant passport to legitimacy--the first piece in an American Family starter kit.

There's enough here for a messy tragicomedy about expectation versus reality, yet Allen is too lazy as a writer to cultivate that material into anything of real, sustained interest. This in spite of a schematic script that would be Brechtian in its mechanization of characters--with Vonnie made to serve as the embodiment of the unrecognized ingénue, and Phil rendered the incarnation of the Bad Jewish Family Man, shirking obligation for success--if it weren't also trying to be charming and sweet. It's tough to reconcile the script's nascent ideas with the brusqueness of their execution. Again, Allen has his characters trade in stale love, sex, and show-business bromides in place of a more organic development of the same themes. And again, he evinces only the faintest interest in lining up his text with the flesh-and-bone performers bringing it to life, at one point intoning in his avuncular and altogether unnecessary voiceover that Vonnie is "lovely, charming, and uncomplicated," as if writing his own oversimplified review of Stewart's rather textured work.

That inconsistency might be explained away as the result of the voiceover's approximation of Bobby's own errors of judgment and perception where Vonnie is concerned, but it's hard to be so charitable to a film that uses disembodied narration so cavalierly to do a hit job on its own characters. It's to Stewart's credit and Café Society's intermittent success that there is in fact nothing uncomplicated about her performance. In spite of what other characters and the movie's own extra-textual notes from the heavens have to say about her, her Vonnie remains opaque in just the right way, suggesting an unsettled inner life rather than an unfinished characterization. For his part, Allen the filmmaker draws out Stewart's melancholy litheness in images where he circumscribes her in text, even giving her a great movie-star entrance as she pulls up to Bobby's modest lodgings for the first time to play chauffeur and possible soulmate, her arm draped over the steering wheel with unmistakably masculine swagger.

Maybe the greatest contradiction that fuels Café Society is this discrepancy between smart compositions and asinine dialogue, the hallmark of Allen's late style. After some career-best work with DP Darius Khondji on Irrational Man, his most intuitive collaborator since Gordon Willis, Allen makes incredible use of Vittorio Storaro, who leaves his mark from the gorgeous opening set-piece, which finds Phil holding court at a shimmering pool party. Storaro's intimate, almost expressionistic lighting turns Bobby and Vonnie's early cafe and greasy-spoon dates into Edward Hopper paintings. Stewart and Eisenberg do their part, too, resurrecting something of their tentative attraction from Adventureland and giving a little bit of gravitas to a melancholy ending that's better realized in subtle dissolves between New York and L.A. than it is in the clanking voiceover. But there's an overwhelming sense that for all this effort, everyone's working off a first draft: not great but good enough. Originally published: July 29, 2016.

THE BLU-RAY DISC
by Bill Chambers The cinematography of Woody Allen's films has always been a democracy. He hires world-class DPs with whom he will be temperamentally compatible (hence mostly Europeans), which serves as an invitation to put their personal stamp on his work--and Vittorio Storaro definitely puts his personal stamp on Café Society, Allen's first digital production. Composed for and presented on Blu-ray at Storaro's notorious "universal aspect ratio" of 2:1, the picture is glossy and vivid (almost helplessly so: Storaro pulled back the saturation of the Bronx sequences to give them a "winter and summer" contrast against the California section, but though this results in a narrower palette, the colours have just as much pop) like nothing else in Allen's filmography, with Storaro's usual emphasis on reds and golds. While the tack-sharp image, generated mostly with the Sony CineAlta F65 (a 4K camera with a Super35 sensor), will initially cause a bit of cognitive dissonance for anyone who takes the annual trip to Allentown, it looks relatively filmic in motion at 24fps/60 Hz. A certain digital patina only becomes obtrusive during the TV-grade dissolves, and although there's some noise in the scene where the electricity dims in Jesse Eisenberg's apartment, considering that candles and the evening sun blotted out by curtains are the only sources of light, it ends up being a pretty great advertisement for modern digital filmmaking. As "natural" lighting like this has in the past yielded images best described as "visible," with washed-out blacks and mealy definition, both the video grain and the stroke artifact around the flames are acceptable trade-offs for the astonishing dynamic range and level of fine detail exhibited in shots such as this one: As for the DTS-HD MA track, I'm still not used to Allen mixing his movies in 5.1. Philosophically he remains a monophile, but here the soundstage does open up a bit for the nightclub scenes and the occasional gunshot benefits from a dedicated LFE channel. As for Allen's usual selection of jazz standards, they seem to sound warmer than normal. The film is preceded on Lionsgate's BD by a loud, showy DTS logo, which is almost funnier than anything Allen could've written. A 2-minute "On the Red Carpet" featurette (HD) interviews actresses Kristen Stewart, Blake Lively, and Parker Posey at Café Society's New York premiere, but their remarks are drowned out by the white noise of an adoring, barricaded crowd. At least they look nice. DVD and digital copies of the film are bundled with the Blu-ray. 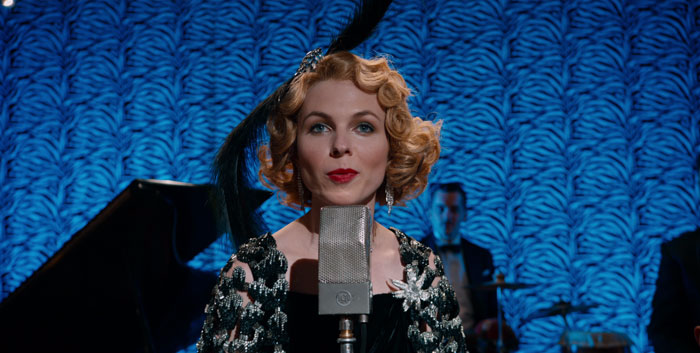