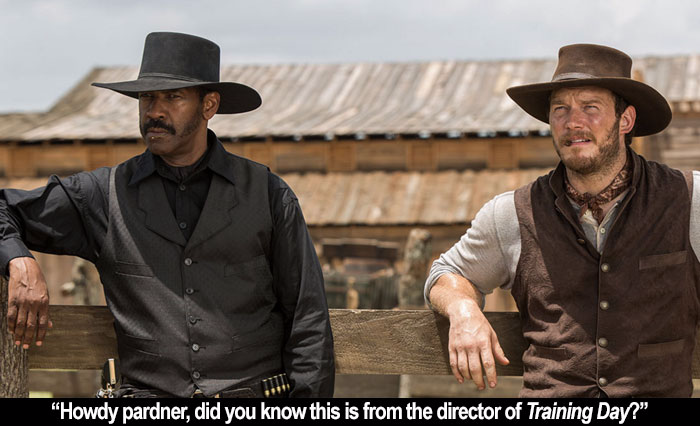 by Walter Chaw That there isn't more of a conversation around Antoine Fuqua's The Magnificent 7 beyond the usual wag-talk about the relative merits of sequels and remakes speaks to something like cultural progress, for what it's worth. The popular criticism of Star Wars: The Force Awakens is that it's derivative and took "no chances." My response is that the heroes of the film are a young woman, a young black man, and a Guatemalan--all in a franchise that set back the racial conversation by about thirty years with its astonishingly tone-deaf prequel trilogy. The Force Awakens, in other words, took a hell of a lot of chances, particularly in consideration of the vile blowback Paul Feig's Ghostbusters suffered for having the temerity to recast a well-remembered bro-fave with women. The Magnificent 7 takes a few chances as well by recasting John Sturges's well-remembered bro-fave Kurosawa remake with Denzel Washington (in the Yul Brynner lead), Byung-hun Lee (possibly the biggest star in Asia), Tlingit/Koyukon-Athabascan actor Martin Sensmeir, and Mexican actor Manuel Garcia-Rulfo. The press junket made a lot of this multi-culturalism and there's a passing reference to it in most reviews of the picture, but like The Force Awakens, the prevailing attitude is that The Magnificent 7 is derivative and that's that. It is that, but that's not all it is.

Consider the case of Broadway's "Hamilton". It's a telling of the story of America's Founding Fathers who are all portrayed by African-American and Hispanic actors, and it's interesting mainly because of those optics; hard to imagine that a traditionally-cast musical about the life of Alexander Hamilton would be as instantly a cause célèbre. The fascination of The Magnificent 7 is that it's so assiduously uninterested in its racial optics that it plays like a weird kind of science-fiction. In replaying almost beat-for-beat an identical establishing saloon sequence from Django Unchained, Fuqua avoids the racial question almost entirely, save for a few furrowed brows. (There are a few more later when Red Harvest (Sensmeir), a Comanche ronin in perpetual war paint, sits down at the dinner table with his extremely diverse crew.) There would be more open racial hatred in any non-central town in the United States in 2016 than there is in any scene of The Magnificent 7. Asked to address this, Fuqua responded that he didn't see any reason, essentially, to add unpleasant language to what was meant to be a movie about "guys who do the right thing." I think that's interesting. I know that Tarantino took some heat from Washington on the set of Crimson Tide for Tarantino's comfort with the "N" word, so maybe there's something else going on in the film's reluctance to use the word. I also think that what this wilful denial of racial enmity does is create something like a Cloud Atlas sense of gaslighting self-delusion. In The Magnificent 7, which takes place in the period immediately following the Civil War, a hero on the Confederate side, Goodnight Robicheaux (Ethan Hawke), declines to use any common epithets for black folks. That's...yeah, that's interesting.

The Magnificent 7 deals with class resentment. The bad guy is capitalist pig Bogue (Peter Sarsgaard), who in the oh-the-humanity prologue burns down a small town's church and murders a few outraged bumpkins. One of the dead bumpkins has a plucky wife, Emma (Haley Bennett), who promptly enlists the services of bounty hunter Chisolm (Washington). Realizing he can't fight this fight alone, Chisolm recruits six other outlaws with various skill sets. Bogue is uncomplicatedly bad. He likes money and he likes land. Chisolm is likewise uncomplicated in that his mother has been raped and killed (and his sisters only killed, I think) by Bogue's men sometime in the recent past. His buddies are also uncomplicated--baddies with hearts of gold looking for a shot at redemption in the defense of small-town values against corporate acquisitional greed. That they're not developed beyond quips and quirks is the major failing of The Magnificent 7, but because these stock characters are suddenly populated by Asian and Mexican and Native American faces, that failing becomes a meta-triumph of sorts. Yes, the characters are boring and undercooked--but look, they're not all white guys anymore. Sometimes it's good that there's not a strong recognition of racial difference. Sometimes it's dangerous. The Magnificent 7 isn't clearly progress, but it's worth a conversation that it's not more of a conversation.

Fuqua is a compellingly uneven director. I can't say I've loved anything that he's done, but there's a certain steadiness to his pictures that suggests agency. He's worked with DP Mauro Fiore five times now. The highlight of The Magnificent 7 is the look of it: long establishing shots that take in the open New Mexico vistas, rendered in the same clean, crisp visual style as the rest of it. I like a scene in particular, the introduction of Red Harvest on horseback, a deer carcass slung across his lap, with our heroes framed against a canyon wall, campfire smouldering before them. So carefully blocked and composed. Red Harvest shares the deer's raw liver with Chisolm. When asked what he's said, Chisolm tells the team "he's with us." The Magnificent 7 is best when it flirts with these ideas that its multiculturalism represents the outcast caste in American society, and that communication between them can be symbolic, unspoken. It's best when it suggests that low-class whites are as disenfranchised as blacks, Mexicans, and Native Americans in the United States and that it's madness that one faction is consistently and cynically played against the others. The movie speaks to a real economic disparity as the cause of revolution, and it provides a chilling template for what happens when the beaten are tricked into backing a Bogue as their agent of change. When Red Harvest duels Bogue henchman Denali (Jonathan Joss), it's an eye-rolling mano e mano between the film's two Native American characters on the one hand, a metaphor for what happens when a minority votes against his self-interest on the other. The Magnificent 7 is best read that way: as a piece in tension with what it wants to say and how it says it. Its defining irony is that it's only really effective in the people it's recruited to walk this well-trod ground. (Find precedent there in the blithely apolitical casting of Duane Jones in Night of the Living Dead.) It's inoffensive, forgettable stuff that's interesting for how inoffensive and forgettable it is, given the stars and director. That's pretty interesting indeed.