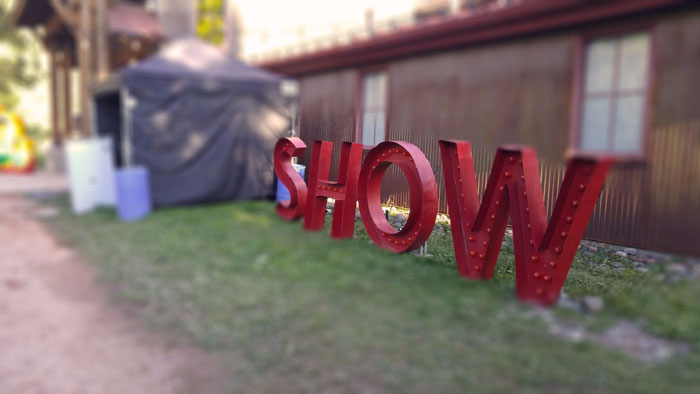 by Walter Chaw The road home is always shorter, so I find an excuse to stop on the way.

The night before, I stood outside the Werner Herzog Theater, right on the far eastern extremity of Telluride. For the rest of the year, it's a hockey rink. The wizards at Meyers Sound, though, rig it brilliantly for the festival. They hang noise-dampening panels and forty-foot noise-killing curtains. They suspend things from the ceiling. They cover every sonically-reflective surface. They create an extraordinary environment for sound. A few years ago, I watched while Alfonso Cuarón instructed the crew from the middle of the 600-seat auditorium on how high to turn up the volume (two ticks above the recommended). I will be forever grateful to have seen Gravity there. It's not a great movie, but it was an incomparable experience. 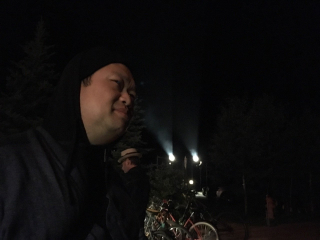 I stood outside the Herzog the night before I left and my friend snapped a picture of me, framed by two arc lights illuminating the smoke from a group of smokers huddled against a light drizzle and the early September chill at 9,000 ft.. I don't know what I was thinking at that moment, but it's right there on my face, whatever it was.

On my way home, around 6 a.m. the next day, it's too dark and it's too cold to drive with the windows down but I do it anyway because I wanted to feel everything. I loaded the collected stories of Clark Ashton Smith on my iPod and listened to 14 hours' worth of them. I confess I cried during the recitation of "The Ghoul". It's the story of a young man who saves the corpse of his beloved from a flesh-eating ghoul by sacrificing his soul. I'm ashamed of crying. I cried through an hour of Manchester by the Sea sitting between dear friends. I tried to hide it at first, but it was impossible by the end. I don't think they judged me for it--at least not harshly. But the way I was raised--the way I'm wired...I do wonder. I'm doing my best not to infect my son with the same shame and self-doubt. If I do, I hope it doesn't take him as long to counter-program it. I want him to own emotions other than rage and jealousy. It's been one of the tragedies of my life that it's taken me this long to be all right with my grief and my weakness.

It's the popular refrain right now to talk about the "death" of movies in a year in which a few key blockbusters that pretty much everyone knew were going to fail went ahead and failed. I don't want to talk about how stupid this conversation is, how childish, pandering, and trolling it is. Except to say that there are dozens of extraordinarily innovative films made every year, including this one, that most people don't see--and won't for years, until they stumble over them and wonder how they missed them. Others will look at these amazing pictures and say they didn't like them. They'll use descriptors like "weird," which is after all the first refuge of the stupid and the inarticulate. Anyway, movies aren't "dying." Every year since film became the popular art form, wags have been saying this as a hip cocktail-party shortcut to actual scholarship and taste. The problem now is that these wags have attained a certain false equivalency in the general conversation. A nation of Robert Fords and Travis Bickles have somehow managed not to be laughed off the stage. Movies aren't even sick.

There's still a drive-in movie theatre in the small town of Montrose between Telluride and home. A detour took me past it on the way up and I resolved on this return trip to spend a couple of minutes there. It's in the middle of a neighbourhood that feels like something out of Stephen King's descriptions of rural Maine. I parked outside its gates and sat on my hood and looked at the rows of speakers and three-story screen and listened to the whisk-whisk of sprinklers on a day just turning into fall. My tires crunched on the gravel. Someone started a lawnmower a few blocks over. Some of my best and clearest memories of childhood are of the drive-in. There is a quality of light in late summer, late morning, that makes everything look like thirty-eight years ago.

Art is a catalyst for introspection. It's an invitation to it--Nietzsche's abyss. The best writing about film is writing about the self. I don't hold to the idea that you could, or should ever try to, exclude the personal from any musing on an extant object. Treating your experience of something as objective is dishonest and boring, maybe even psychotic. I'm lucky in every way, and grateful. I just completed my second full year as General Manager for the Alamo Drafthouse theatre in Denver, and in that capacity I have done things I never could have imagined. I have an amazing team. I have a beautiful family. My friends are incomparable. The ones I see this one time a year in Telluride are some of the best I've ever had or ever will have. They saved my life. I have everything and I take nothing for granted. Telluride is my annual emotional weather report. There's a chance for rain, there always is in the afternoons, but it's mostly sunny and the leaves are turning orange and yellow. When you say the movies are dying, it you who's dying. It's the best time of the year in Colorado. I wouldn't be anywhere else.