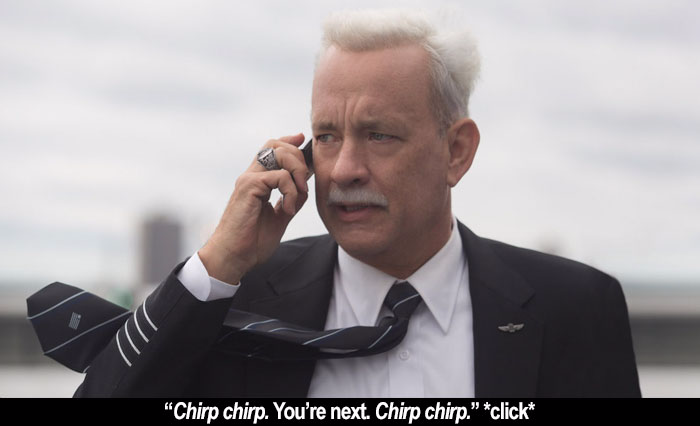 by Walter Chaw An elderly film by an elderly filmmaker for an elderly audience, everybody's favourite says-appalling-things old bastard Clint Eastwood directs the guy everyone can agree on, Tom Hanks, in a rah-rah hagiography of Captain Chesley "Sully" Sullenberger, the most uncomplicatedly heroic figure in the United States in the last...how long ago was Abraham Lincoln? 151 years? If you don't know, Sully landed an airplane with 155 passengers on it in the Hudson River when bird strikes disabled both of the plane's engines. Multiple dream sequences have Sully imagining what would've happened had he turned his plane over populated areas. 9/11 is referenced often--explicitly and obliquely. An applause-geeking closing title card informs that lots of New Yorkers helped rescue the passengers from the water after the splashdown because New Yorkers are good and America is great, raising the question, Mr. Eastwood, if it needs to be "great again." Maybe it's all gone to hell since 2009. The timing is interesting. Let's call it that.

Sully (Hanks) has forty years under his belt. Aviation is his life. There are a couple of flashbacks to when he used to fly other airplanes. There's one that implies he was always landing airplanes that were otherwise about to crash. You want to be snarky about this milk-fed stuff--and Eastwood plants a very subtle seed that there was reason to doubt all this because Sully was trying to start a safety consulting firm right around the time he made an emergency landing, but there's really no controversy here except the ginned-up one the NTSB stirred up while investigating the incident. Even then, you get the idea that they're kind of just doing their job (protecting millions of air passengers from hot shots and wackadoos), and making a film about this, in this way, makes it seem like Eastwood is shaking his cane impotently at the riff-raffing pussies driving too loud in front of his house, using terms of respect for other races and women, and standing on his lawn. There's no bite to this story. Sully is the proverbial empty chair. There's a weak commentary, if you squint, on the "gotcha!" press who want to turn everything into the biggest thing ever, but most of the coverage of this incident past the initial doomsaying is unfailingly laudatory, so, you know, there's not much there unless it turns out that Sully wasn't a hero--which he was. Is.

There's also the suggestion from Sully's eternally-harried wife (Laura Linney)--who chooses the absolute worst moments to be an insufferable nag--that the couple are economically strapped because they might lose one of their rental properties. "We need you flying, Sully," she whinges, "What if we lose the property?" A wealthy, middle-aged white couple on the verge of losing their extra land is only relatable to exactly the type of people thronging to this film and nominating it for Best Picture and Actor and Supporting Actor (Aaron Eckhart, hilariously underused as Sully's co-pilot) and Screenplay, so...well-played, Eastwood. I love how Mrs. Sully calls in the middle of Sully getting grilled and threatened with the termination of his career to tell him she's nervous about losing the house, then calls him again before the uplifting conclusion to say that she just realized Sully almost died. I hate Mrs. Sully. The only other women in the picture are idiot passengers and their harridan mothers, or single moms and their squalling infants, or Anna Gunn's NTSB wonk, who is almost as hateful as Mike O'Malley's NTSB wonk. Pity Gunn, who, after weathering death threats playing Walter White's wife, is poised to receive a few more from Sully. Or she would be if Sully inspired much passion one way or another. The stewardesses are good during the crash sequence, I guess. It would've been nice to spend a couple minutes with them.

Sully is edgeless, meaningless. I've defended Eastwood forever. His movies always struck me as progressive. I felt like American Sniper was an effective commentary on the dehumanization of war rather than what many saw it as: a celebration of carnage. He made a no-kidding American masterpiece with A Perfect World. Whatever your estimation of them, Eastwood's films have always had footholds and invitations for sometimes-furious debate. Not Sully. Sully is about the scene near the end when, after listening to the flight recorder, Sully says to his co-pilot that he was proud of them for doing their jobs. It's true. It's an interesting time when doing your job, being good at it, having experience and taking pride in it, is a rare and commendable quality. Maybe that's what Sully's about: this idea that people who are good at what they do are pilloried for it, suspected for it, and not able to make a living because of it. It's a good conversation. Sully is not a good vehicle for it, alas. It is, instead, two things. Just like its subject, it's workmanlike and boring. And just like its subject, it will be celebrated widely and in full throat in conflict with its desire to be a working-class martyr. The most iconoclastic thing about it is that it clocks in at 90 minutes and change when Awards Season wisdom suggests it needed to be around 135 minutes. Brave.