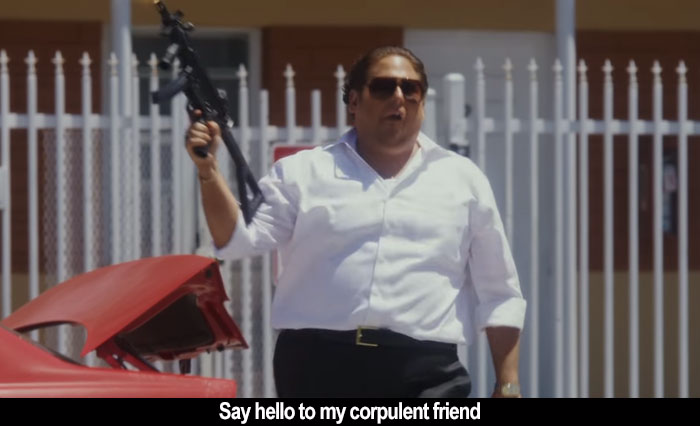 by Walter Chaw Like The Big Short before it, Todd Phillips's War Dogs is a breezy, loose, "for dummies" gloss on recent history that says for all the things you thought were going to hell in the world, you don't know the fucking half of it, buddy. It details how W.'s administration, after being accused of cronyism in making Dick Cheney's Haliburton wealthy beyond the wildest dreams of wealth with the gift of bid-free defense contracts, opened the floodgates by essentially giving every unscrupulous asshole on the planet the opportunity to bid on defense contracts. In that pursuit, our government set up an "eBay" list where major arms dealers could pick off the larger contracts, and dilettantes and arms "day-traders" could, from the comfort of their basements, sell the United States military a few thousand handguns. War Dogs adapts a magazine article about two assholes in particular, David Packouz (Miles Teller) and Efraim Diveroli (Jonah Hill), who made a fortune, then made a terrible mistake when they decided to traffic a hundred million rounds of defective Chinese AK-47 ammo by disguising it as Albanian stock. Actually, their mistake is that Efraim is a psychotic loser so pathological in his incompetence that even the U.S. government had no choice but to do something about it. It's a level of obviousness matched by the film in moments like one in the middle of the game where Efraim screams "fuck the American taxpayer!" OK, yes, we get it.

That's the problem with War Dogs--and The Big Short, while we're on the subject: it tells an important story but feels as though it has to pitch it to the lowest common denominator. When they used to make movies like these (All the President's Men, for example), they presumed a certain level of intelligence in the audience or, failing that, an attention span and a feeling of sobriety before a great national shame. The Big Short at least had the wit to be self-referential about exactly how stupid we've become as a culture, and how that violent anti-intellectualism is actually a strategy nurtured by the people who get away with this stuff on a regular basis. War Dogs, alas, is a sort of bro version of Goodfellas where the the good guy, David, is unambiguously good and the bad guy, Efraim, is Hannibal Lecter and they both unironically venerate Scarface. Teller is exceptionally natural and Hill is exceptionally unnatural, sporting a high-pitched exhalation for a laugh and vacillating between Seth Rogen and Jared Leto, sometimes in the middle of a sentence. There's also Bradley Cooper, playing his now-trademark unctuous sleaze as a legendary arms dealer on a terrorist watch list, and the ridiculously charming Ana de Armas, staking a claim as the Next Big Thing despite a thankless role as the long-suffering wife who finds a bundle of money taped to the bottom of a sink. The cast is game, in other words; it's the script-by-committee that lets them down, and the instinct to pander with snappy editing, a hip soundtrack, and a "Behind the Music" dramatic arc.

When it dumbs down the comedy of errors that is our Middle East policy, the picture has the effect of limiting its own scope. Ending with Leonard Cohen's "Everybody Knows," War Dogs congratulates the audience for being smart after a couple of hours of The Hangover misadventure with stakes no higher than whether or not David will win back the wife he doesn't deserve and walk away with enough money to never have to be a massage therapist again. The film hasn't even done enough to make us like David. He's likeable because he's not disgusting like Efraim and because we hope he gets back together with Ana de Armas because she's adorable. He's the perfect-blank slate Everyman upon which one projects dreams of fulfilment, however ill-gotten. There's not enough here about the toll of their actions, the collateral and radicalization stemming from years of war lubricated by parasites like David and Efraim. It's another The Wolf of Wall Street in that way: neither controversial enough to titillate nor informative enough to outrage. War Dogs feels like a cautionary tale about excess instead of an exposé of how the worship of money may finally be the thing that brings down all of it. (Explanation therein of how it is that the incarnation of Mammon is the flag-bearer of the Grand Old Party.) Not how it brings down a psychotic slob and his nebbish buddy--all of it. It's how the world ends: not with a bang, but with the ding of a cash register.