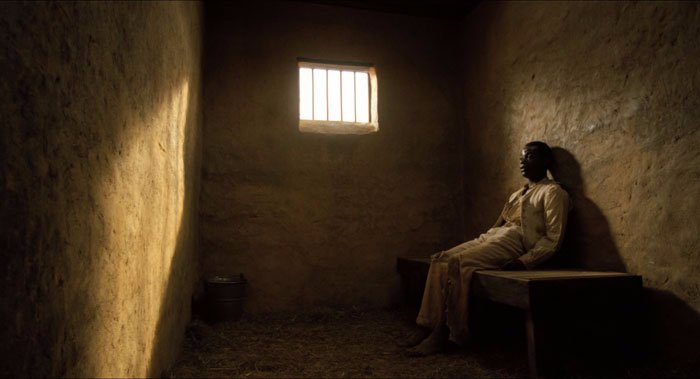 **½/**** Image A Sound A Extras A+
starring Maynard Eziashi, Pierce Brosnan, Edward Woodward, Beatie Edney
screenplay by William Boyd, based on the novel by Joyce Cary
directed by Bruce Beresford

by Walter Chaw I'm not sure exactly when or why Aussie director Bruce Beresford became the cinematic spokesman for the African experience. It probably, in Hollywood's peculiar racial calculus, had something to do with his appalling Driving Miss Daisy being the Oscar juggernaut that Do the Right Thing was not. Credit Beresford for the years he spent living in Nigeria and the stands he took in films like The Fringe Dwellers to work with an Aboriginal cast against counsel, but something nettles that, with the remake of "Roots" still warm and Beresford and fellow Aussie new-waver Phillip Noyce at the helm of half of its four episodes, somehow Beresford is the acceptable choice to tell these Black stories. This isn't even an indictment of his pictures, mind, but rather an indictment of a system so heavily skewed towards one racial group and gender that whatever the quality of the product, there's a good conversation to be had about the people making it. There's dissonance.

When Beresford's films work--and he has made a few very fine films indeed--they work largely because of his close and painful identification with his alienated heroes. Tender Mercies is a no-kidding masterpiece about estrangement and regret; Black Robe is another gem about someone adrift somewhere they shouldn't be, in pursuit of something they can't ever obtain. His best movies have characters sold lemons, crooked deals, stacked decks. When his pictures don't work, they seem to fail in much the same way that his peers in that amazing Australian New Wave period largely did when they came to the United States. Their edges round off. Their "outsider" status as POMEs gets rolled into larger narratives of chosen Hollywood sons, chrome and shiny. Even Peter Weir, the one New Waver to transition to Hollywood and keep his soul mostly intact, stumbled with stuff like Dead Poets Society and more obviously Green Card, before finding a way back, no pun intended, with Fearless, which nobody saw, and The Truman Show, which, along with Eternal Sunshine of the Spotless Mind, should have given Jim Carrey the dramatic career he was mining for a while.

It's interesting for Beresford to follow up his biggest hit with a small film, completely shot in a Nigeria that had fallen apart in the years since Beresford last visited, that functions essentially as a rebuke to the paternalism (elder and racial, both) of Driving Miss Daisy. It's not unlike countryman Phillip Noyce following his Jack Ryan sequels with Rabbit-Proof Fence and The Quiet American, or Fred Schepisi doing Last Orders at the end of his American run. To the objective eye, these look an awful lot like shots at atonement: returns to the little films that threatened for a time to change the cinematic landscape, crafted outside the easy reach of studio interference. If Mister Johnson is only a marginal success, at least it's not a notable artistic betrayal.

The right hand of British road-builder Rudbeck (Pierce Brosnan), Mister Johnson (Maynard Eziashi) is a native Nigerian so anglophilic that he wears a suit and leather shoes in the punishing African summer and extols the virtues of Mother England to anyone who'll listen. When an opportunity arises for him to help Rudbeck cook the books on their endeavour--an endeavour we know will help the colonizers to colonize with more efficiency, it bears mentioning--he falls into the subterfuge with brio. As a confederate, he feels more the equal. Alas, the ruse is discovered, and Johnson takes the fall. His loss of status with Rudbeck results in an increasingly desperate series of gambits in which Johnson first tries to disguise his humiliation among his countrymen (over whom he's been lording his nominal status), then tries to parlay into profitable schemes that might somehow buy his way back into Britain's good graces, or the illusion of them. Alcoholic wife-abuser Sargy (Edward Woodward) develops an interest in Johnson before and after his fall, alternating ferocious beatings with tearful reconciliations when the unusually plucky Johnson proves not as easily defeated as Sargy's native wife. Johnson's and Sargy's relationship--like the rest of the relationships, even events, of the film--provides an allegory for what happens when one culture tries to subsume another, and how it's never really as simple as winning the hearts and minds of an oppressed minority.

So long as Beresford sticks with the lone protagonist, beset upon by his desires for assimilation and the roadblocks placed in his path by intractably-entrenched cultural hegemonies, he's on firm ground. Mister Johnson is an oftentimes-fascinating figure. He begins as obsequious "Uncle Tom" and ends as twisted, broken Fantine, betrayed by his desire for assimilation. Outside of Johnson, Beresford's less sure. Rudbeck and his wife (Beatie Edney) are caricatures of a frigid/repressed-to-lusty British marriage, for instance, played for broad yuks and rhymed with Sargy's disturbing domestic-violence episodes. There's a real danger that portraying the Brits this way reduces the Nigerians to noble savages. Based on a Joyce Cary novel that sought to begin decoding the evils of colonialism from the colonizers' point of view, Mister Johnson walks that line throughout; I'm not sure it's always successful in staying on the right side of it. The argument for the film is that it's allegory, that the characters are meant to be broad. It's in keeping with Beresford's work. The problem of Driving Miss Daisy is that it's almost impossible to make a parable of race in the Civil Rights Era south without becoming grotesque and uniquely insensitive. The problem of Mister Johnson is that it aspires to Rumer Godden but is only Joyce Cary at the very moment in his career when he went from chronicler to critic of British-rule interference in Nigeria. The intention is good, and the message is well-taken, but it plays like a child's bedtime story punctuated by wife-beating, murder, and Dickensian capital punishment. Mister Johnson is more interesting when taken as a midpoint in the larger narrative of where the Australian New Wave began and where it's wound up. See it as a cautionary tale. Try as you might, you never wade into the same river twice. 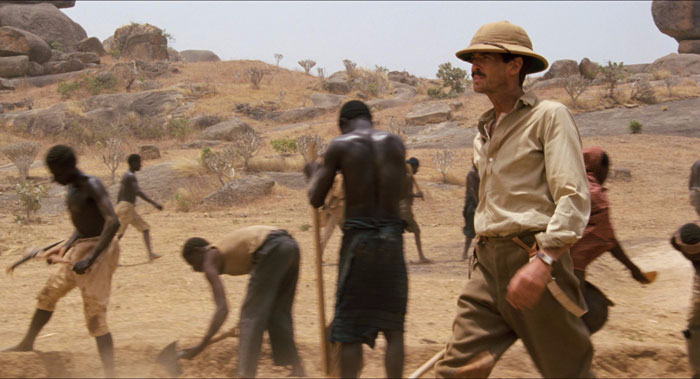 THE BLU-RAY DISC
Criterion does its usual yeoman's work, bringing Mister Johnson into next-gen with a 1.85:1, 1080p transfer, sourced from a new 4K scan of the camera negative. It looks beautiful: warm, clear, and stable throughout, with a tight, rapidly-resolving grain structure and incredible dynamic range. Night scenes, what few of them there are, pop with vitality. One scene in particular, where it seems as though Johnson has killed Sargy in the middle of a party, reminded me a lot of Something Wild-era Jonathan Demme in terms of its vibrancy, colour, and energy. Highest praise I can muster. The 2.0 LPCM stereo audio is likewise definitive. There's nothing spectacular about this talky film's sound design, but the dialogue is crisp and there are no defects to speak of. From an A/V perspective, the presentation is tops.

"Bruce Beresford" (16 mins., HD) has the director talking about returning to Nigeria after years away to find its infrastructure destroyed. I would have liked more background as to why he was there in the first place and why he chose to go back--but all in all, a warm piece from the affable director. There are a couple of fine anecdotes, the best centring around Beresford's fight for his casting choices. In "Michael Fitzgerald" (12 mins., HD), Mister Johnson's producer tells of his personal investment in Maynard Eziashi, then an unknown British actor, taking the lead. He's very pleased with himself in the way that producers tend to be. "Maynard Eziashi" (13 mins., HD) sees the actor speaking in a lovely British accent about the importance of this film for him and his comfort with his character's Nigerian accent. He touches on the mild controversy surrounding his portrayal of Johnson as sycophantic, identifying correctly, I think, that Johnson's transformation is contingent on first his betrayal of his culture, then his adopted culture's betrayal of him. "Pierce Brosnan" (9 mins., HD), one of my favourite people in the industry, doesn't have much to add, though he demonstrates his essential humanity by testifying to the excellence of his partners in this venture. A trailer (2 mins., HD) rounds out the disc-based special features.

Professor Neil Sinyard contributes a gorgeous piece for the insert, "Off the Beaten Track." Therein, he recounts that the film began as a dream project for John Huston (something Fitzgerald mentions in his interview), and goes farther by explaining why the legend may have wanted a bookend for his Kipling adaptation The Man Who Would Be King. He makes the case for Beresford's treatment of the material and in one line at the end crafts a full character in Rudbeck that had frankly escaped me. It's the best kind of criticism, managing to comment on the culture that produced the book, the artist who adapted it, and the picture's relevance to the modern viewer. I'm not a huge fan of Mister Johnson, but Sinyard's making me want to watch it again. 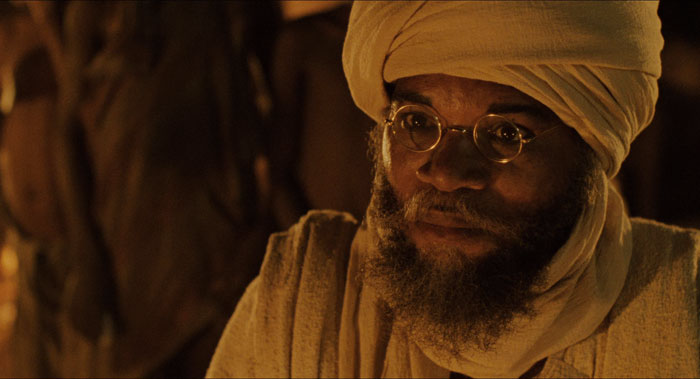