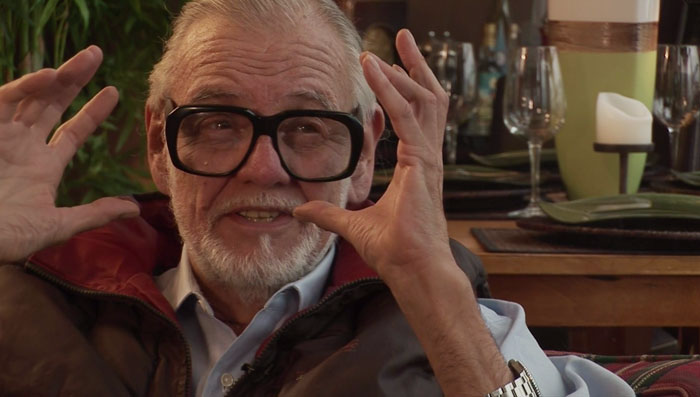 by Bryant Frazer The market for 1980s horror nostalgia on Blu-ray reaches some kind of saturation mark with the release of Just Desserts, a feature-length documentary on the making of Creepshow, the George A. Romero-helmed, Stephen King-scripted anthology-film homage to EC horror comics. Producer-director-editor Michael Felsher, well-known to home-theatre horror buffs as perhaps the most prodigious creator of the featurettes that show up on genre releases from independent video labels, originally made Just Desserts for a 2007 UK DVD release of Creepshow. Unfortunately, he couldn't get Warner Home Video interested in picking it up for the North American version. One $4,400 crowdfunding campaign later, Felsher himself engineered the BD release of Just Desserts via Synapse Films in the U.S.. That's a great story in its own way--who doesn't like to see an independent filmmaker bypass the studio gatekeepers and give his work a chance in the market? Divorced from its context as a studio-sponsored bonus feature, however, Just Desserts doesn't stand out in any way except its earnestness. It's an excellent example of the cozy, clips-and-interviews format that dominates Blu-ray supplements, and that means it's essentially rote in both form and content. Felsher isn't mounting a critical argument about Creepshow, nor is he placing it in a revealing new context. He's simply flattering the film and its audience.

Of course, that's what makes it an easy watch for Creepshow fans. Romero himself is a genial master of ceremonies, reminding viewers that the movie was made on a fairly low $8 million budget--a pittance considering it got a big-studio release through Warner Bros.--and offering a supply of anecdotes about the production that frame the comments of other contributors. Make-up maestro Tom Savini goes into more detail on the special-effects challenges, most notably the creation of Creepshow's lead creature, Fluffy (i.e., the Crate Monster). Felsher is just getting started with those two. Actors Tom Atkins, David Early, Ed Harris, and genre legend Adrienne Barbeau all show up with their own reminiscences, as do producer Richard P. Rubinstein and composer (and 1st AD) John Harrison, whose sprightly synth-goth score is one-of-a-kind. Did I mention the great comic-book illustrator Bernie Wrightson and animator Rick Catizone? Felsher even hits up three grips, a film editor, a script supervisor, and maybe some other players I'm forgetting. The problem is who's missing: Stephen King wasn't willing to be interviewed, and his absence makes any Creepshow retrospective less than definitive, no matter how lavishly researched. Still, there are some illuminating bits of business throughout. I enjoyed the videotape outtakes of zombies Ted Danson and Gaylen Ross shambling around during the filming of "Something to Tide You Over," and the stories about the challenges of that chapter's beach location enhanced my appreciation of what Romero and Co. accomplished there.

The most compelling section of the doc is the gross part: its discussion of the insect-wrangling that went on behind the scenes of the concluding segment, "They're Creeping Up on You," which culminates in (spoiler!) a literal swarm of cockroaches erupting from a deceased E.G. Marshall's chest cavity. It's truly an amazing story, and very much of its time, as a similar sequence today would be effortlessly populated with CG bugs. Just Desserts covers everything from the procurement and transport of South American roaches to the sticky question of where straggler insects may have ended up once shooting wrapped. Felsher is lucky that his doc naturally builds to such a delightfully absurd and frankly revolting climax; it damned near makes the whole sit worthwhile. But while Creepshow is a fun film with a reputation that's grown over the years (it has special significance to me as the first R-rated film I ever saw in a theatre), it's not Apocalypse Now or Fitzcarraldo. It's not something that demands post-mortem consideration, and nothing in Just Desserts will reward a viewer who isn't predisposed to enjoy it. This is a well-made but inessential bibelot for fans only.

THE BLU-RAY DISC
Picture quality on the 1.78:1, 1080p Synapse Blu-ray release is good enough for a talking-heads piece. The HiDef interviews are lit and graded to a tasteful, relatively low-contrast look that testifies to the pride Felsher takes in his work. Clips from Creepshow itself look OK; they're taken from a reasonably high-quality HD transfer, albeit one that exhibits a lot of gate weave and seems to have been noise-reduced within an inch of its life, giving the picture an unnatural, lifeless texture. Anyway, it's fine for getting the point across in a documentary context. Captured competently throughout, the audio is presented as a stereo DTS-HD MA stream.

As you'd expect of a disc put together by a guy like Felsher, this Blu is loaded with supplementary material. The extras include no fewer than two audio commentaries on Just Desserts itself. Felsher's solo track directly addresses a small and specific audience: documentary filmmakers, especially those who create behind-the-scenes features for DVD and Blu-ray releases. So he spends an hour-and-a-half discussing territorial licensing arrangements, ways to dress up interview locations, and that time an unnamed actor freaked out about a downmarket hotel room and angrily reneged on a promised interview. The making-of covering the making-of is a document I decry on principle, but Felsher has a personal and self-deprecating touch that makes it tolerable. Creepshow, you see, was the first horror movie Felsher ever saw when his father played him a VHS tape back in 1983. "That opened the world to me beyond anything I would have expected," he recalls.

The second yakker comprises three more audio interviews with personnel who didn't appear in the original documentary--actor John Amplas, property master Bruce Alan Miller, and make-up effects assistant Darryl Ferrucci. And then Creepshow DP Michael Gornick gets the spotlight in "Creepshow Days" (8 mins., HD), a new video interview where he talks about shooting the film in sequence and outlines the challenges of capturing some of the night scenes and special-effects work, working on the beach, etc. A seven-minute promotional segment from Pittsburgh TV channel KDKA, titled "Creep Show's Creepy Secrets," yields more glimpses of the production; Hal Holbrook, E.G. Marshall, Barbeau, Romero, King, and Savini each weigh in briefly. The video quality is, sadly, pretty rough--we're talking about an old VHS copy of an analog television broadcast--but it's a nice artifact. An expansive behind-the-scenes photo gallery runs just under nine minutes.

Usual suspect Sean Clark shows up with a 15-minute instalment of "Horror's Hallowed Grounds" (HD), visiting some of the original filming locations in and around Pittsburgh, PA. This stuff generally makes me yawn, and this one is especially weak sauce given that there's nothing inherently interesting about these locations: Beyond the striking facade of Margaret Morrison Carnegie Hall on the Carnegie Mellon campus, it's just a couple of big old houses and a suburban neighbourhood where Clark has a conversation with Atkins that dominates the running time. Unfortunately, the old gymnasium (now a Siemens facility) that was used as a soundstage is fenced off and seen only from a distance.

More vintage video footage from the production is collected in a 26-minute assembly titled "Tom Savini's Behind-the-Screams," organized segment by segment to cover everything from the undead puppet mascot "The Creep" to the E.G. Marshall bust that Savini built for "They're Creeping Up on You." The real jewel of the collection, though, is "Scream Greats, The Fangoria Video Magazine Series Volume I: Tom Savini" (53 mins.), which leans heavily on Savini's own behind-the-scenes video documents of his work. As it originated on VHS back in 1986, it's obviously not HD-quality, yet it doesn't look too bad, and it comes with a new commentary track by Felsher and Savini, the latter of whom kicks things off by asking, "Why are you forcing me to watch this again?" It's not Creepshow-specific, but so much the better--clips from Romero's Dawn of the Dead, Day of the Dead, and Martin, William Lustig's Maniac, and more make for an entertaining document of horror-movie special effects in the days before CG VFX work killed latex and silenced the squib.

Barrel scrapings? We got barrel scrapings! Just in case you'd miss 'em, Felsher has cut together some outtakes of his Just Desserts interviews with Romero (10 mins.), Savini (8 mins.), and Wrightson (5 mins.). At this point, we're well beyond the point of diminishing returns--but if Creepshow is your Citizen Kane, you'll be glad they're here. 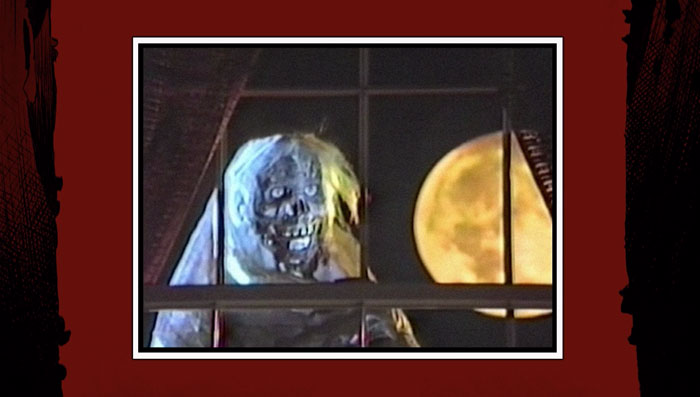