by Walter Chaw I like just about everything about I, Madman. It's a pastiche picture coming at the end of the slasher era that cobbles together bits of De Palma and "Tales from the Darkside", tosses in some wonderfully cheap stop-motion effects, and stars the incomparable '80s dreamgirl Jenny Wright. Truly, it has everything. Wright is Virginia, a used-bookstore cashier (even her job is a super-nerd's idea of a dreamgirl's job) addicted to lurid pulps (sigh!) who is, as the film begins, reading a nasty thing about a "Jackal Boy" monster created in the unwitting womb of an unfortunate victim. Virginia's cop boyfriend Richard (Clayton Rohner) disapproves of her reading habits because of the states they send her into, but, Virginia being Virginia, she persists. She becomes obsessed with tracking down a volume called I, Madman, written by a certain Malcolm Brand (Randall William Cook). It's about a nutter who gets dumped because of his displeasing features and so he cuts them off. Alas, slicer's regret has Brand attacking women in an attempt to take back the missing pieces of his face. Turns out Brand isn't writing fiction, but memoir, and Virginia's interest in him has attracted him to her through the pages of his book.

I, Madman on one level is a perverse Pygmalion story that deals with larger issues of the life of the mind (the nature of reality, the power of the word): Virginia's voraciousness for pulp brings what she reads to life, the way Adam dreamed of Eve and woke to find her real. On every other level, I, Madman is a fun bit of exploitation cinema that looks like something Scott Spiegel would have made during this period (and did--see: that year's Intruder), sporting the same bright, cartoonish visual scheme along with a few developments surprising for their inventive smarts. I like, especially, how Virginia finally embraces her talents, such as they are, to affect meaningful change in her life. I like how her boyfriend is supportive of her even when the film makes the pivot for him to be unsupportive for a while. I like how her friend at the shop, Mona (Stephanie Hodge), gets to express how hurt she is that Virginia has excluded her from her life at the moment Virginia needs a friend most. And I like how there's a Jackal Boy monster that rages through the piece like a fugitive from a lost Harryhausen.

At the centre is Wright, who, in her only leading role, presents as complex, intelligent, capable. She disappeared from the scene not long after this. On the 2002 DVD release of Near Dark, her castmates offered speculation as to her whereabouts and openly feared for her, evidently not without good reason. She's all right now, it seems. In the '80s, she was more than that. In small roles in The World According to Garp, St. Elmo's Fire, Pink Floyd The Wall, and Keith Gordon's exceptional The Chocolate War she proved mesmerizing--the prototype for Lori Petty as the "little girl lost" who was actually the most dangerous thing in the room. Her turn in Near Dark is iconic for kids growing up during that period: a placeholder for the endless dusk of adolescence. In I, Madman, she provided a serious grounding to a role that could have been played as self-knowing or, worse, self-indulgent. Virginia, though, is earnest. She's vulnerable. When she finds the object of her obsession in a plain paper package left at her door, she evokes the joy of discovery for the ardent collector in the age before the Internet made everything available in an instant. Wright should have been a star. She is one for those in the particular know. As for the rest of it, I, Madman is a solid genre exercise indicated not so much by novelty as it is by guileless enthusiasm. There's much to be said about a film that likes its genre, and director Tibor Takacs, fresh off The Gate, offers an engaging precursor to the post-modern Scream '90s, with I, Madman's influence especially felt in the similarly gyno-centric Candyman. It's pretty great.

THE BLU-RAY DISC
Scream Factory shepherds I, Madman to Blu-ray in a 1.85:1 1080p presentation that admirably resists any kind of surplus DNR despite a coarse grain structure. The source print is clean--although dirt and grit betray the optical effects along with the usual spikes in grain--and the image has rich shadows, if somewhat narrow dynamic range. In combination with the deep, vividly-saturated colours, however, the pitch blacks and burning whites fit with the film's pulp aesthetic. All in all, I, Madman appears to have had the lightest digital cleanup applied during the transfer process, which is frankly how we prefer things around here. While the 5.1 remix, presented in DTS-HD MA, has more pronounced ambient effects and a generally fuller play in the lower registers to recommend it over the 2.0 DTS-HD MA alternative, really the latter is more than serviceable and probably does the original Ultra-Stereo soundtrack justice. There aren't a lot of showy scenes in this one from an audio standpoint--and the one or two that are there are served well by both tracks.

Director Takacs records a full-length commentary alongside actor and chief F/X guy Cook. I particularly appreciated Cook's apparent inability to speak in a way that doesn't seem carefully, and grandly, rehearsed. Takacs is delightfully humble in his surprise that there's a half-life for this film and his kiddie thriller The Gate and discusses Wright's casting as well as the decision to have Cook be a major player. Cook talks about how he was too handsome to play the ugly villain (not in so many words, but there you have it), thereby justifying the heavy makeup. He's a goof, though an affable one. The two have nice chemistry. Though he demurs, I got the impression that Takacs liked the original title, "Hardcover," better. And so it goes.

"Ripped from the Pages" (33 mins., HD) is a new doc that covers the production in laudable detail. Takacs and Cook return in individual interviews, joining a line-up of talking heads that includes screenwriter David Chaskin and stars Rohner and Hodge. Notably missing is Wright, and here, unlike in the Near Dark extras, her absence isn't commented upon. (A recent in-depth interview with SHOCK CINEMA suggests she has no interest in becoming a public figure again.-Ed.) Rohner admits to a crush on Wright, while Hodge recalls her being extremely committed to the Virginia character, not to mention a generous person overall. Hodge is delightful. Takacs recalls that Roger Ebert "loved" the film (he liked it a lot), and all register their disbelief that this movie took off and found a cult following. "Behind the Scenes" (11 mins., HD) is a selection of VHS footage from the set narrated by Cook that features stuff like how he swung a real fire extinguisher ("It was heavy as hell!") at an invisible Jackal Boy composited in later. It's an interesting document of Cook's process and the ingenuity required to do this type of thing pre-CGI. A stills gallery plus theatrical and home-video trailers for the film round out the disc. 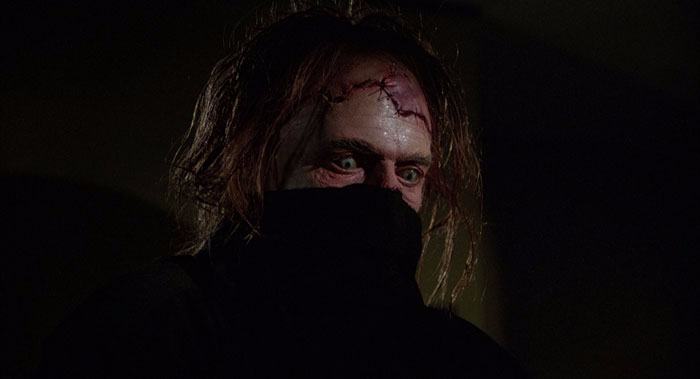