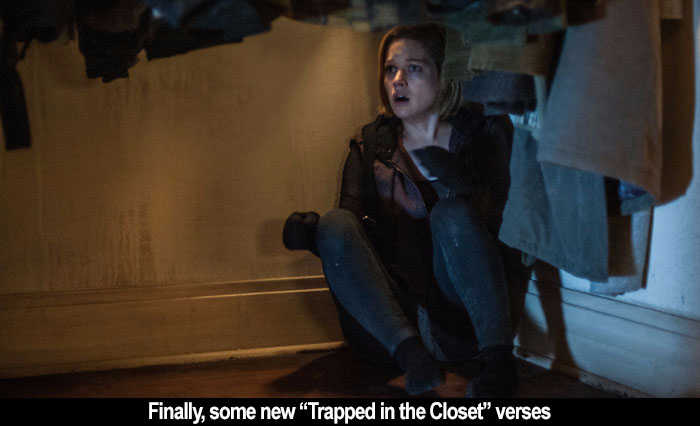 by Walter Chaw Fede Alvarez is the real deal. He made a short film in 2009 called Ataque de Panico! and from it scored a gig directing the fantastic Evil Dead reboot. He has a clean style and a respect for the cinema as a narrative vehicle. What he introduces he inevitably pays off (Chekhov would approve), and he has a way with the camera that's as witty as it is wise. Consider a moment in his new film, Don't Breathe, where he introduces a workshop with a playful, loping push-in on a giant hammer, then pulls back to find one of our heroes where he was, rooting around below. Odd to say about things as extreme as Evil Dead or as unbearably tense as Don't Breathe, but Alvarez's pictures are delightful. They trigger a giddy response. They are knowing, ingratiating in that way that a secret shared between connoisseurs can be ingratiating. It's that feeling you feel when you're watching a movie by someone you trust won't make a hash of it. In just two features, Alvarez has earned that trust and more.

His films are also part of a larger conversation that includes contemporaries like It Follows, The Witch, Green Room, Osgood Perkins's as-yet-unreleased February (now known as The Blackcoat's Daughter), 10 Cloverfield Lane, The Shallows, The Neon Demon, and, in the mainstream, Star Wars: The Force Awakens, Zootopia, and even Finding Dory. They're pictures engaged in an examination (one that arguably began with Kimberly Peirce's egregiously-underrated Carrie reboot and Jonathan Glazer's extraordinary Under the Skin) of female sexuality and the sometimes-literal trials by fire a woman goes through to emerge fully formed. They present a vision of the world in which women are beset on all sides by predators, sexual and otherwise (but always sexual), and in which men clothe themselves in pomp and bloviating self-aggrandizement but at their centre essentially remain children. The hero of Alvarez's Evil Dead, Jane Levy's Mia, is an addict seeking to flee one ordeal only to endure another. The climax of that film is her forcing cunnilingus on a friend, offering fellatio to her brother, and bisecting her tongue as a particularly pithy form of auto-mutilation. It would pair well with the shearing sequence from Antichrist. The message of both acts is that a woman can achieve some measure of acceptance only through the quieting of her voice, or the denial of her sexuality. It's powerful stuff. There's an analogue in tales of Amazons cutting off their breast to better facilitate the drawing of a bow--your reminder that this is the original ending to the book that would become Jane Campion's brutal/beautiful In the Cut.

In Don't Breathe, Levy returns as Rocky, a fighter from the wrong side of the tracks in a hellish, economically-devastated Detroit (played without embellishment by Detroit). She dreams of scoring big during one of her breaking-and-entering jobs and escaping to a better life in California with her baby sister. It's fascinating to see an American city represented in this way--as a Third World slum--but there you have it. Rocky's boyfriend, Money (Daniel Zovatto), is a loud-mouthed braggart and bully, and her friend and admirer Alex (Dylan Minnette) holds the literal keys to the proverbial kingdom in the access he "borrows" from his father's home-security business. They read a newspaper story about a vet who lost a child to the carelessness of a rich girl and was paid off handsomely by the rich girl's family. They decide they'll burglarize his house in search of that fat score. Money does it for the money, natch; Alex for his hopeless infatuation with Rocky (which she nurtures with the guileless predation that pretty girls sometimes learn); and Rocky to save the little girl who trusts her. They learn that their mark (Stephen Lang, in a star-making turn at last) is blind. They learn too late that this doesn't make him helpless, or necessarily innocent.

The build-up to these discoveries is almost unbearably tense as the three sneak into the house, which stands by itself in an empty, decrepit neighbourhood. They see that isolation as a boon. It isn't. The immediate aftermath, as their victim turns out to be something made mad and dangerous by loneliness and a killer's training, is so gorgeously edited and arranged that it's almost tactile. There's a moment where he finds two pairs of discarded shoes and sniffs them insistently, like an animal would, that is stunning and, yes, delightful. Alvarez intercuts this discovery with Alex and Rocky's flight through a basement introduced by a clever pan down to introduce a crawlspace that will later figure large in the film. Our sympathies have shifted at this point to the blind man. They shift back when Alex and Rocky discover what they do in the basement. Don't Breathe is about, as Evil Dead is about, different kinds of love and devotion. It's interested in the thickness of blood, relative to water. Alex has several opportunities to escape, but he doesn't. His first invitation, he responds with, "I can't. I have my father." Filial devotion. He's motivated by the same things as Rocky. He thinks there's an affinity there because of that, but alas there isn't. The first surprise of Don't Breathe is that it's essentially a noir: A boy loves a girl, meaning he's fucked. It's about how a father misses his daughter. It's about how nice guys finish last. Money warns Alex at one point to "keep it in the friend zone." Money, noble at the end, has given the only good advice.

Don't Breathe is a clockwork. Dissect the scene in the car, with the girl and the Rottweiler. It involves rolling up windows, popping trunks, and discovering pivotal objects left behind, and it's paid off with the picture's nastiest surprise. The picture is relentlessly focused, the work of an auteur. This is a golden age for independent horror films, perhaps the golden age. Rocky emerges from this film the way Thomason does from The Witch, or Rey does from The Force Awakens: as immensely powerful for her choices and for the winnowing fire that has revealed her power. Not for nothing do these Red Riding Hoods have their epiphanies in wildernesses, playing with forces beyond their immediate comprehension. That's not just a play on words. The films from this cycle are interested in what the world looks like through a young woman's eyes. Finally. It's like the scene of Carrie's delighted quickening in Peirce's remake--the distaff version of Peter Parker's pubescent awakening in Sam Raimi's Spider-Man; Rocky understands something about herself when the dust settles. She's strong. She doesn't need you. And it's more than lip service. Don't Breathe is muscular stuff. Watch it with Green Room and it all comes clear.