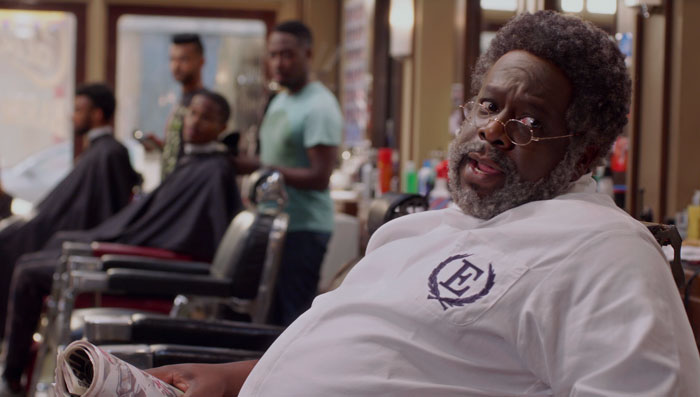 by Walter Chaw It's hard for me to find entry into Malcolm D. Lee's Barbershop: The Next Cut (hereafter Barbershop 3), because the topics it broaches are generally topics I only intersect with philosophically. I hear about the gun violence in Chicago, I see gang violence portrayed in films like Boyz N the Hood and Colors and more recently David Ayer's ugly End of Watch, and I do my best to be empathetic to horror stories about children shot in their beds as crossfire collateral. I see pictures of what Detroit looks like and read what I can about dystopias that make RoboCop's vision of the Motor City seem naive now. I agree entirely with the Black Lives Matter movement. I wonder why it is that even video of atrocity does little to bring rogue officers to justice. I wept when Dallas policemen were ambushed while protecting Black Lives Protestors' right to rage. I felt righteous fury along with the protestors in Ferguson. Charleston, and the graceful response by the church during funerals to mourn their dead, broke me apart. One of my best friends is black; I resist saying that because it's what non-black people say to pardon their racism. I watched both O.J. Simpson miniseries. And I realize I am entirely unsuited to speak to the black experience in the United States. It's not my place. I don't know anything.

At its best, Barbershop 3 educates. It touches on things like gun violence and losing track of the next generation and owning a business as a minority. It's about relationships within the black community, hopes to escape and survivor guilt, and that uneasy moment when two men who should not be in the same room together suddenly are. It addresses the power of social media in affecting change, positive and especially negative. When Barbershop 3 is good, it normalizes the black experience into terms universally understandable. In fact, when it's good, it's really good. When it's bad, it thinks it needs to be something other than a prolonged conversation between intelligent people, and lapses into the profoundly familiar territory of an adultery melodrama involving two new characters, handsome barber Rashad (Common) and flamboyant hairdresser Draya (Nicki Minaj). This aspect of the film never seems like anything other than a sop to popular tastes, the fear that a Richard Linklater-esque stream of words and ideas might be too boring for the mainstream. It also leads to cheap jokes about "hos" and butts and fake boobs. Barbershop 3 tries to disguise that cheapness with a feigned interest in women's issues, but one of its two strong female characters is made to apologize at the end for justifiably suspecting that her husband is running around on her. He considers it: No, it's her fault. Not great.

Ice Cube is Calvin, co-owner of the titular barbershop. His 14-year-old son Jalen (Michael Rainey, Jr.) has taken lately to wearing dreads and accepting gifts from local crime lords looking to recruit him. Though the arc of their relationship isn't fresh, the approach--with Calvin incapable of finding the right frequency with which to address his boy--is honest and emotionally true. Calvin tries to protect Jalen, but discovers that he's only really capable of pushing him away. It's an unexpectedly painful depiction of what Mark Twain talked about once: how as a 14-year-old he couldn't believe how stupid his father was, and how when he turned 21, he was equally amazed at how much the old man had learned in seven years. Lee's depiction of a confrontation on the streets of Chicago is the only time the film is effective when it abandons its single-room conceit. It's terrifying and immediate and provides contexts for the greater dialogue about how gun violence, and the lack of any kind of meaningful gun control, has robbed an entire generation of options. Calvin thinks about moving his business to somewhere "safer." There's a great scene where he asks a local gang leader (Jamal Woolard) to surrender his firearms for the duration of his haircut, and it becomes clear that "somewhere safer" is code for somewhere, if not explicitly white, then at least more affluent. There's discussion of Obama and the obstructionism he encountered as the first black POTUS: "He's not just my president, he's everybody's president," says Calvin in response to the complaint that Obama hasn't done enough for blacks. It's sensitive and loaded, giving proper point-counterpoint to nuanced arguments too often steamrolled in the age of punditry and trolling.

Barbershop 3 is a good movie, in other words. Good enough to recommend despite the time it wastes being a threadbare soap opera. A couple of days removed from it and the stuff with the "ho" and her conquest is already fading. What resonates is a basketball game between a dad and his boy ("Why you gotta take away everything I care about?" "Because I love you"), as well as the moments of real fear and anxiety when the world-gone-wrong encroaches on Calvin and co.'s little bubble. It's in those moments where it's obvious that the best way to bridge the gulfs that divide us is to find common ground in our shared humanity. We're in this together. Too easy to forget that sometimes.

THE BLU-RAY DISC
Warner presents Barbershop 3 on Blu-ray in a flawless 1.78:1, 1080p transfer that looks exactly like a modern film shot with a top-line digital camera should. The image on the disc is warm and appealing, whatever the ultimate flatness of the movie's aesthetic. An attendant 5.1 DTS-HD MA track delivers dialogue and music with equal clarity and fidelity. Supplementary material, what there is of it, begins with "Barbershop Bootcamp" (5 mins., HD), which goes behind the scenes to show the cast learning how to cut hair for realsies. The "Deleted Scenes with Malcolm D. Lee" (12 mins., HD) are basically expository scenes that were excised for length or repetition. Frankly, they could have all been included and it wouldn't make much difference; the film is episodic by design--rationale, perhaps, for the melodrama acting as ostensible arc. In any case, not much here, yet it does bear mentioning that Ice Cube is uniformly fantastic in the film, even on the cutting-room floor. "Gag Reel" (2 mins., HD) is basically what it sounds like: people forgetting lines or breaking character. I hardly ever ask for this, but I would have appreciated a commentary track from Lee and Cube. They have things to say. The more opportunity for them to say them, the better. Bundled with DVD and digital copies of Barbershop 3, the platter cues up with a HiDef teaser for Fantastic Beasts and Where to Find Them. 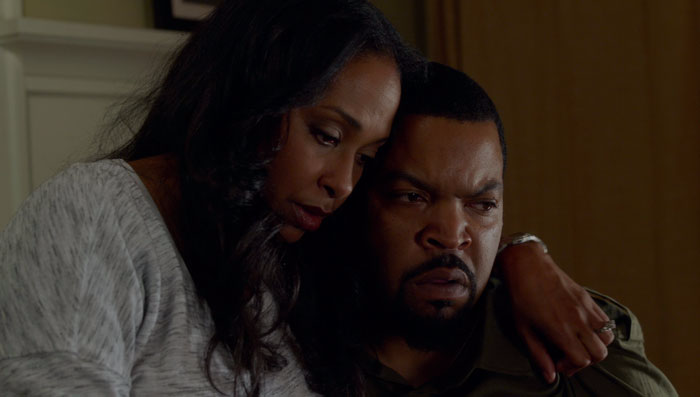