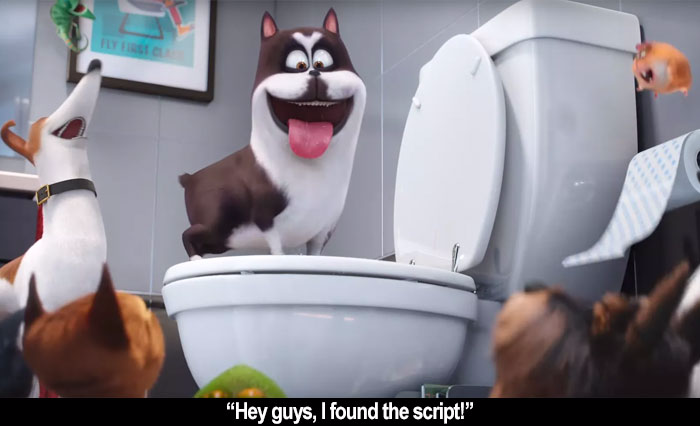 by Walter Chaw Brutally bad, from the exhausted hip-comic improvisational patter to the endless slapstick pratfalls that comprise the entirety of the film, Chris Renaud and co-director Yarrow Cheney's abominable The Secret Life of Pets excretes into theatres for the express purpose of distracting your young ones for 90 minutes in an air-conditioned setting. It's not remotely witty, never for a second clever, and with a typecast Kevin Hart voicing a one-trick racial pastiche of a bunny, it underscores the cultural divide between those who think Minions and The Lorax are unwatchable dreck and those who are wrong. It's machine-tooled to make money, which it will after the manner of other things that make money at the expense of your children, but it's worth considering that the reason for most of the terrible things in this world is our agreement that critical thinking is a burden, while anti-intellectualism is a roadmap to our survival as first a civilization, then as a species. In our society, saying that something is "for kids" means that it's better, safer...unless it's entertainment. The greatest trick the devil played is convincing an entire culture that it's better not to waste time wondering if what you put in your child's head is productive and smart. So long as there's no sex in it, game on. If The Secret Life of Pets (hereafter Pets) were a chair, it would be made of broken glass and rusty nails. But hey, never mind, why criticize? It's just for kids.

This one has terrier Max (Louis C.K.) resentful that his master has brought home big dog Duke (Eric Stonestreet) and, Toy Story-like, acting like a psychopath in order to get rid of the new rival for his master's attention. When she leaves for the day, Max and Duke and a few other voice-actor stereotypes (bitchy fat cat, hyperkinetic puffy dog, Dana fucking Carvey doing his old-man voice) engage in an exciting adventu...I can't even finish. Look, Pets has jokes like how a poodle loves death metal, how a cat acts super cool after being clumsy, how animals are afraid of vacuum cleaners, and how dogs hate squirrels. There's a band of evil abandoned pets led by Snowball (Hart)--a magician's rabbit who is dangerously close to a racially-malignant stereotype, so they make him a white rabbit, why not--and a tattooed pig, raising the spectre of Plague Dogs in a way so unnecessary and tone deaf it causes one to wonder if someone ever thought at any point they were making a movie that mattered and had something to say. Pets doesn't matter. It doesn't have anything to say. The fact of its existence is the only conversation you could have about it. That the people responsible likely have a bona fide hit on their hands, resulting in the inevitable sequel in a couple of years, says all that needs to be said about our eventual obsolescence.

Consider again, though, the idea of casting Hart as the voice of a little white rabbit. In a Hollywood raked over the coals for its lack of diversity, it's worth taking a second to think about the decision-making behind this one. Consider, too, Louis C.K., who writes brilliant, painfully-transparent observational comedy, who struggles obviously and publicly with very personal, very ugly demons--consider what Louis C.K. would say about this film and the payload of self-loathing necessary to do something like this. If his defense of this (and he doesn't need to defend it: who wouldn't respond to a dump truck full of money?) is the "it's just for kids" fallback, it would be a betrayal of everything the comedian has preached for years and years. This is the big cash-in, his Ice Age/Ray Romano moment, and for the first time since I remember being aware of him, he's a part of lowering the collective temperature in the room. There are poop jokes, there's Albert Brooks as a Jewish hawk, there's endless noise and antic motion punctuated at the end by unearned pathos as all the masters reunite with their adoring pets to the score of the next big forgettable tune. Pets is a wasteland of bad thinking and desperation. It stinks of avarice, is packed with unintentional malice, and is aimed precisely to profit off your love for your children. There's an exchange from another Albert Brooks film, Broadcast News, where a beleaguered news producer yells at a rapidly-escaping audience that they'd better get used to pabulum and garbage masquerading as edifying discourse, because they're about to get a lot more of it, to which one of the herd calls back, "Good!" Pets is going to make a zillion dollars and you're going to get a lot more shit just like it. You know, for kids.