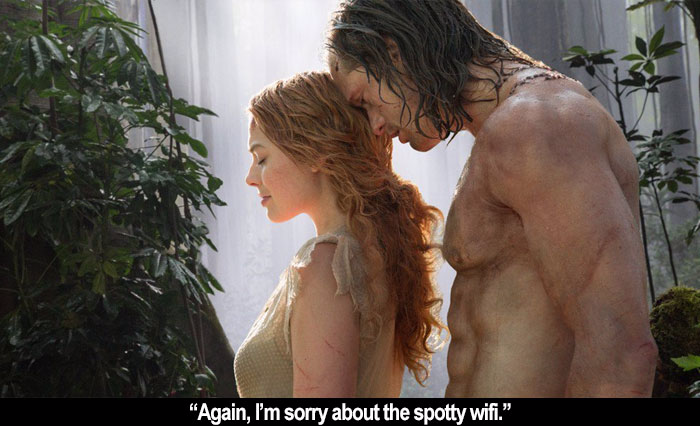 by Walter Chaw David Yates's The Legend of Tarzan is at once a long-overdue, if massively-fictionalized, biopic of George Washington Williams's time in the Congo observing colonial Belgium's abuses of the rubber, ivory, and diamond trades; and it's an adaptation, nay, updating of Edgar Rice Burroughs's first five Tarzan books, with heavy creative license taken but the spirit kept largely intact. Although it's more successful as the latter than as the former, both endeavours are carried through with seriousness and intelligence. It's not a perfect film: the editing is terrible, particularly during the action sequences, suggesting this was probably a longer movie truncated out of fear of diluting the "good" bits. I also don't love the washed-out colour palette that paints everything in a blue gloom--at least not as much as Yates seems to, between this and the last four Harry Potter films. And it bears mentioning that Samuel L. Jackson isn't really an actor anymore and that Margot Robbie arguably never has been. Yeah, The Legend of Tarzan is hard to defend objectively. It does, however, understand the appeal of the Tarzan mythos, answering in grand moments why it is that he's found his way into over 200 motion pictures and dozens more serials and television series (live-action and animated). I should disclaim, too, that I read (re-read, in some cases) all 24 original Burroughs Tarzan novels in the weeks leading up to the picture's release. In other words, I'm a big, giant pulp nerd.

There's a sublime moment right at the very beginning of The Legend of Tarzan where a civilized Tarzan, nee John Clayton/Lord Greystoke (Alexander Skarsgård), in London, surprises wife Jane (Robbie) as she tutors a group of schoolchildren. Thrilled by his celebrity as the "Ape Man," the kids surround him and, quietly, Tarzan shows them how when he puts his hand on the ground, clenched in a fist, his knuckles spread because of a childhood spent walking on them. It's an amazing moment, a genuine stunner. This one image encapsulates the entire history of the character in the popular imagination. It's the archetype in a nutshell, the idea that apes clothe themselves in civilization to become men, and that it's ever possible to return to the prelapsarian state. Writing in the early days of the twentieth century, Burroughs is an amalgam of Jules Verne and Rudyard Kipling (and a contemporary, nearly, of each), born of the serial novel phenomenon, which explains the occasional bloat his stories suffer and the strictures of their rises and falls in action. Kipling, in fact, was a vocal critic of Burroughs and said of Tarzan of the Apes that it was an example of someone writing the worst thing they could just to see if they could get away with it. I'd argue that Burroughs's pulp is ageless because it deals with the essential question of Man in society--and that for all the obvious issues with verse paid for by the word, there remain moments of real masculine beauty. Try this line on for size: "Quick was Sabor, the lioness, and quick were Numa and Sheeta, but Tarzan of the Apes was lightning." Poetry.

Most of the Tarzan books follow the same formulaic struggle between Lord Greystoke and his Mr. Hyde, Tarzan, locating the character as the chief precursor to the Incredible Hulk as various baddies find ways to make him angry and lure him back to the Dark Continent, where, as a shipwrecked, orphaned infant, he was adopted by a fierce tribe of apes. (Not gorillas, it's important to note. Gorillas, see, are gentle.) There's one where his ape brother, who appears in Tarzan, tracks down Tarzan in London and helps him to retrieve Tarzan's impetuous boy. In another, in one of the best moments in the series, Tarzan leads a group of apes, a jaguar, and a tribe of natives on a war party to a ship as haunted as anything dreamed up by H.G. Wells and his Dr. Moreau. Much is made of how Burroughs was racist and sexist; the popular defense is that he's a product of the 1910s. His Girl Friday, made in 1940, has a scene where a room full of newspapermen (and Rosalind Russell) talk about a little African-American boy born in the back of a truck. They refer to the infant as a "jigaboo." Modern audiences generally tsk at this and blame the time when, more likely, the script was highlighting how insensitive and boorish are these characters in the midst of this crisis they're covering. There's a passage from Tarzan the Ape Man that goes like this:

But one might as well judge all blacks by the fellow who ran amuck last week, or decide that all whites are cowards because one has met a cowardly white. There is as much individuality among the lower orders, gentlemen, as there is among ourselves.

Written in 1914, this is a white man, born and raised in an all-white community, having the hero of his fantasy make a progressive statement about race. Is there ugliness in his tales of discovering miniature descendents of Atlantis or a Roman Legion unaware that Rome has fallen? There is. Most of it directed towards women, who, aside from hardy soul Jane, are generally abused or discarded. Gore Vidal wrote an essential piece on Tarzan in 2008 for ESQUIRE. In it, he concludes that:

James Bond, Mike Hammer and Tarzan are all dream-selves, and the aim of each is to establish personal primacy in a world which in reality diminishes the individual. Among adults, increasing popularity of these lively inferior fictions strikes me as a most significant (and unbearably sad) phenomenon.

Vidal understood that these figures and their relative popularity define the ages in which they return, like King Arthur, as champions for a people who need him again. Author Philip José Farmer posits that Tarzan and Doc Savage are immortals. In one of Farmer's pastiches, Tarzan is sent back in time to recur throughout history in various forms.

All this to say that The Legend of Tarzan is inevitable in this period of our social history. Things are bad and so this skylark that a return to a place that never existed is possible. Ditto the dream of a powerful individual becoming an avenging god and restoring some concept of natural order. The Legend of Tarzan is excellent when it explores these undercurrents. Skarsgård is the best screen Tarzan, possibly ever. He's a sociopath. He rarely speaks. He's miserable in civilization and burdened, almost fatally, by the same upon his return to Africa. He goes there because George has asked him to help uncover the king of Belgium's reasons for closing off the borders and silencing reports coming out of Congo. George suspects slavery. He's right. There's a subplot where the chief (Djimon Hounsou) of a cannibal tribe hunts Tarzan for murdering his son; another where the evil Belgian of the fifth novel, The Jewels of Opar, is replaced by evil Belgian Rom (Christoph Waltz), an emissary to a king to which the real George Williams would go on to pen "An Open Letter to His Serene Majesty Leopold II, King of the Belgians and Sovereign of the Independent State of Congo By Colonel, The Honorable Geo. W. Williams, of the United States of America" after the events of this film. Really, though, what The Legend of Tarzan is about is that moment when his knuckles spread to carry his weight.

This isn't a politically-correct sop to Burroughs. It's a faithful evocation of Burroughs's belief that there were good black men and bad; that as revenge for the murder of his Ape mother, Tarzan acted as a beast. It isn't until late in the first book that Tarzan discovers that not all men are created equal. He learns, too, of the horrors of colonization and the havoc it's wrought on a fictional tribe, the Waziri, that now numbers just a few dozen. If later in the series Tarzan and Jane live on a plantation as essentially feudal lords of the Waziri, it only lends complication to the conversation, not easy condemnation. George Williams is portrayed heroically, but unfortunately by Jackson, who only delivers the one performance anymore whether playing Mace Windu or George Williams. Hopefully he still inspires a few thousand Google queries in the confused aftermath. Robbie is raspy and one-dimensional and blown off the screen by Waltz in their dinner scene together (one that highlights mainly how extraordinary Karen Allen was in the same scene in Raiders of the Lost Ark), though Jane is one-dimensional in the books as well. It's faithful.

But when Tarzan comes upon a pride of lions and, after a pregnant moment, crouches down and nuzzles them, or when he finds a vine and finally swings, or even when he engages in foreplay with his wife on their first night on the Continent by imitating the mating calls of several species of wild animal...yeah, man. Watch the moment after Tarzan bests an opponent in hand-to-hand battle. Watch how he admits that he was without honour once, but no longer. Watch how his opponent suddenly drops the macho bullshit and shows his broken heart. The Legend of Tarzan is an exceptional Burroughs adaptation: You can find fault, and easily, with its prose, but when it's right, it's right in exactly the right way.