by Bryant Frazer Released in the summer of 1973, this film version of Richard Matheson's 1971 novel Hell House arrived during a transformative period for horror movies--especially British horror. The gothic trappings popularized by England's Hammer Pictures were being upstaged by the more contemporary settings of hits like Night of the Living Dead, which reflected America's misadventures in Vietnam in a disorienting funhouse mirror, and Rosemary's Baby, which brought Satanism out of the woods and into the city. Hammer tried to keep up with more salacious endeavours like the lesbian-themed Karnstein trilogy, but the old-school horror movie was pretty much put out to pasture when The Exorcist debuted at the end of '73. By some measures, then, The Legend of Hell House was ahead of its time, even though it failed to fully capitalize on themes The Exorcist popularized: spiritual possession, sexual abandon, and the failure of rational thought to deal adequately with supernatural phenomena.

The Legend of Hell House is a haunted-house yarn, but it's also the story of different people with different beliefs who are at odds with each other while working towards a common goal. An aging zillionaire has hired a small team to prove or disprove the existence of life after death by spending a week studying the interior of a purportedly haunted mansion that had been, under lord of the manor Emeric Belasco, the site of not just sex and drugs and murder, but scenes, too, of utter debauchery alleged to rival that of the Marquis de Sade. Similar investigations of the house have ended in death and disaster for the visitors. Leading the latest foray is Lionel Barrett (Clive Revill), a physicist who considers the house to be teeming with residual electromagnetic energy left over from Belasco's Bacchanalia that can be drained away with the proper equipment. Also on hand are Florence Tanner (Pamela Franklin), a beautiful young psychic with a churchy streak, and Franklin Fischer (Roddy McDowall), a perpetually spooked-looking medium who, as the sole survivor of a previous expedition to the house, has first-hand experience with its powers. Along for the ride is Ann (Gayle Hunnicutt), Lionel's wife, who expects the trip will vindicate her husband's theories.

Before you know it, the house is a-rockin' and a-rollin' with trembling tables, roaring fireballs, and plunging chandeliers. Lionel rejects the idea that ghosts are responsible, claiming the violent physical manifestations are created as the visitors themselves tap into the house's energy and subconsciously create personal hauntings that further their own goals. So detailed is Lionel's research that he makes more sense than your typical fright-flick skeptic. When Ann wanders downstairs in the middle of the night to drop her nightgown and rub up against an appalled Franklin, we're meant to wonder if an evil spirit overtook her or if she's finally expressing the neglect she feels in her husband's bed. And when Florence invites a dead man to make love to her, is she really trying to set his spirit free, or has religious repression of her carnal instincts predisposed her to play-act as sexual saviour? Either way, The Legend of Hell House takes paranormal activity as a given. Thus it becomes a tall tale in conversation with itself--a science-fiction psychodrama scrapping with an all-out horror show for narrative dominance.

Director John Hough knew exactly what he was in for. A veteran of TV's "The Avengers", Hough had been recruited by Hammer to direct Twins of Evil, the third film in the aforementioned Karnstein trilogy, so he knew about balancing straight-faced terror with a wink and a nod towards cheesecake. Hough next helmed a version of Treasure Island starring Orson Welles as Long John Silver, an experience that may have made a roaring haunted-house yarn look like a walk in the park. Returning to the supernatural, he didn't exactly evolve the visual style of the early-1970s British horror film (that was more the purview of Nicolas Roeg, who was making Don't Look Now at roughly the same time), but he kept the proceedings punchy. For one thing, his camera is often handheld and generally more mobile than the norm: At one point it adopts the POV of an angry housecat; at another, it's set spinning on its Z axis, tracking backwards as Florence runs down a hallway, finally coming to rest with a vertiginous flourish on the other side of a cut.

Furthermore Hough has a habit of pushing in tight, framing faces in extreme close-up--an affectation that is at first distracting but eventually finds its place in a chamber drama that requires the audience to understand the mood swings and minute reactions of its players. Thus magnified, Franklin's prim demeanour reads as pious self-righteousness, and McDowall's eyeball-amplifying Coke-bottle glasses emphasize his status as shell-shocked spectator. Meanwhile, cinematographer Alan Hume captures the house's interiors in nicely-muted tones as the actors' pallid faces play against intricately-designed background interplays of light and shadow. Hume even gets enough mileage out of repeated red-on-red compositions to stay in Sven Nykvist's rearview for a lap or two. (Since The Legend of Hell House went into production in October 1972 and Cries and Whispers didn't go into release until December of that year, it seems unlikely that the Bergman film had any influence, though I'd love to believe it did.)

Both book and movie are often knocked in comparison to Shirley Jackson's earlier The Haunting of Hill House. That novel is a literary classic and--along with its film adaptation, The Haunting--a landmark of the genre. By contrast, Hell House is not classical, nor even classy. Matheson's book is a direct response to the Jackson tale, one that you might imagine was typed at least partly with one hand, the other held in the air with the middle finger pointing upwards. Matheson appropriates Jackson's framework wholesale, but where The Haunting of Hill House is largely a subtle psychological study (its horror elements are famously ambiguous), Hell House is positively brimming with sex and violence. The thrills are lurid and visceral, and Matheson relishes their presence. What's more, he knows enough about the field of parapsychology to ground the story in the context of earnest quasi-scientific theories and philosophical debates that make the most irrational and horrific elements land that much harder.

The Legend of Hell House was made by AIP co-founder James H. Nicholson as the first production in an independent deal with 20th Century Fox. (Nicholson died, however, before the picture came out.) With a screenplay credited to Matheson himself, it is a fairly faithful adaptation, although most of the sexual material was elided to score a PG rating. (Maybe if Ken Russell had directed it, Matheson would have been allowed to keep the visible erection on the crucifix hanging in the chapel of Hell House. (And that would just be for starters.)) 21st-century viewers will note that Matheson's female archetypes are, well, simplistic. Lionel and Franklin aren't necessarily three-dimensional characters themselves, but they are placed in reasonable opposition to one another, where they serve as the story's rational voices. By contrast, Florence is portrayed as gullible and Ann as basically a know-nothing; they're mainly defined by the way they act out their desires in varying states of dishabille. In Matheson's defense, Hell House was never going to be a feminist work. And it does feature generous character development, while the sexual component makes sense in a haunting perpetrated by a vindictive spirit with an eternal hard-on.

Again the film steers well clear of the most explicit territory mined in the novel. What it does carry over intact is the book's dialectic, with repeated discursions on the nature of paranormal phenomena and their disputed catalysts actually amplifying, rather than dispelling, the suspense. In that regard, the electronic score by Delia Derbyshire and Brian Hodgson is also fantastically effective. Too, although it's necessarily a comedown after much of the action on screen, I was, personally, delighted by the climax, which reminded me of our demented American election season, in which a scary but puffed-up and half-baked strongman has dominated political discourse. Whatever its failings, The Legend of Hell House is genuinely smart. It demands your suspension of disbelief and then requires you to learn its jargon and follow along as it disappears up its own ass. But the logic of its arguments is consistent, the motivations of its characters are clear, and the events depicted are genuinely creepy--if not scary as hell. 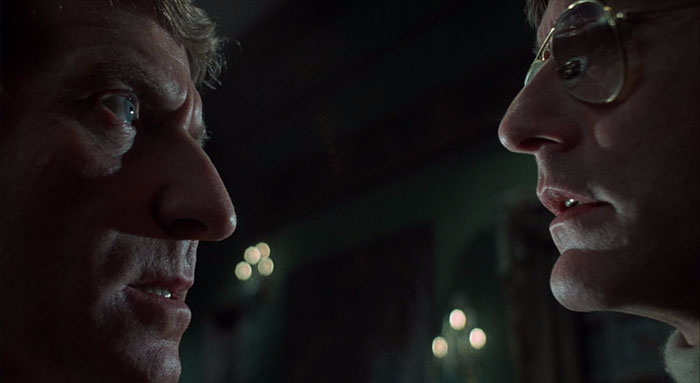 THE BLU-RAY DISC
Scream Factory's Blu-ray of The Legend of Hell House is a marvellous artifact--the film elements used for the HD transfer seem barely-touched by digital clean-up tools. The image is alive with grain and other minor imperfections like particles of dust and dirt that are generally scrubbed from higher-profile releases, which gives it an authentic early-'70s-cinema texture without distracting from the overall quality. (Some shots, especially optical process shots, do feel overworked and perhaps artificially sharpened, yet those are the exception rather than the rule.) Colour tone and saturation feel apropos of the era, without the exaggerated primary colours sometimes used to juice up a title for the home-theatre crowd. The image can get frustratingly dark, but the black areas of the frame look like natural shadows, not like digital crushing of the lower registers. Sound quality is typical for a film of this vintage, and not much work has been done to clean up hissing and crackling on the monaural track (presented here in DTS-HD MA 2.0). Still it sounds good, considering, probably thanks to a little bit of sweetening to take off the harsher edges. I find the hands-off approach to video and audio most pleasing, as the overall texture better reflects the look and feel of the celluloid source material. Others may regret that a more diligent clean-up wasn't done.

Scream Factory's special features are somewhat scanty. Conspicuously missing from the set is any contribution from Matheson, who passed away in 2013. (This disc hit shelves in August of 2014.) We do get an "audio commentary" with Pamela Franklin that fits the label's reliable "scream queens" M.O., but it isn't handled especially well. Franklin's voiceover doesn't commence until her face first appears on screen, at about the five-minute mark, and subsequent stretches of dead air suggest there wasn't a lot of compelling material to work with. An unidentified interviewer is sometimes heard asking questions and sometimes not; the whole thing is edited inconsistently and confusingly. Franklin offers your usual anecdotes from the set, commenting on her relations with her co-stars, Hough's talents as a director, and Hume's perfectionist approach to lighting. As far as The Legend of Hell House itself, she's pretty cool towards it. "I didn't think they'd be talking about it five minutes after it came out," she says at one point.

Though "The Story of Hell House" is just a 28-minute talking-head-and-movie-clips interview with Hough, it comes closer to Scream Factory's usual level of quality. Among other anecdata, the director explains how working on location restricts the mobility of the camera, points out the film's trickiest special-effects work, and reveals his own personal beliefs about the nature of life after death. He remembers that unfortunately none of the mediums he called to the set were able to create real paranormal phenomena that could be captured on camera. Near the end, he discusses the movie's impact on the rest of his career (it was directly responsible for getting him hired by Disney for Escape to Witch Mountain and The Watcher in the Woods) and speaks as a fan about some of his favourite films, mentioning Rosemary's Baby and The Exorcist as well as Ingmar Bergman.

Rounding out the supplements are two minutes' worth of radio spots; a gallery of colour and black-and-white production stills, posters, and lobby cards (heavy on shots of Franklin, natch); and trailers for The Vampire Lovers and the original The Amityville Horror in addition to The Legend of Hell House. 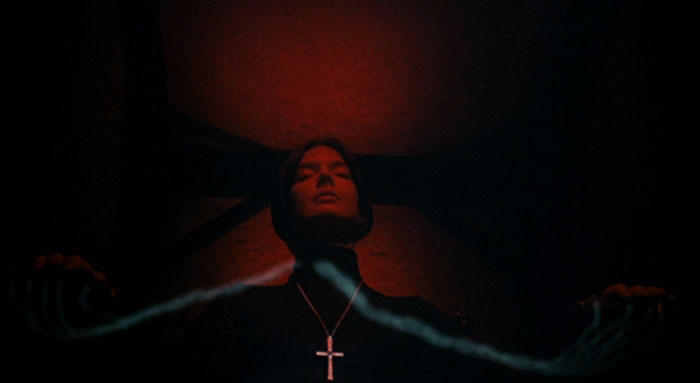