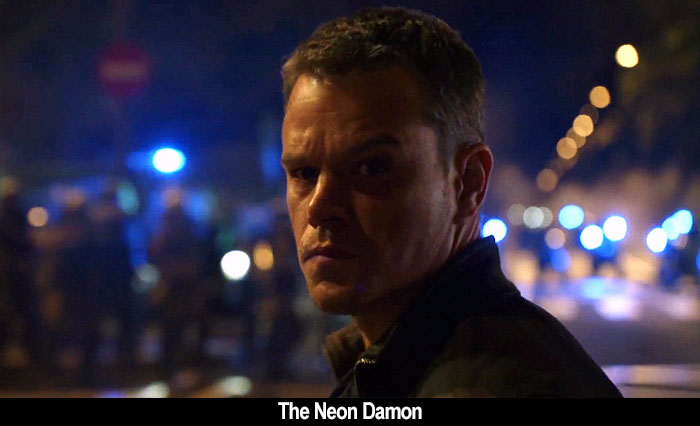 by Walter Chaw There are two modes in Paul Greengrass's Jason Bourne, his and star Matt Damon's return to the franchise after almost a decade away from it: thudding tedium, and incomprehensible chaos. By this fifth instalment (which follows the Jeremy Renner-starring spin-off attempt, The Bourne Legacy), it all plays a little too much like self-parody. Every time there's a conversation about THE TRUTH now, it feels like a bad SNL skit. I still love The Bourne Identity. Watching it in comparison with the Greengrass films (and with most any modern action movie) underscores exactly how superior is Doug Liman as an action director. Liman shoots an action scene like the dance sequences in Saturday Night Fever: with respect for geography and the skill and physicality of his stunt performers and cast. The car chase through Paris in the original begins with a careful consultation of a map, a few questions about the state of the car, and some light but crucial character development, then proceeds into a nice, clean set-piece that establishes stakes, spatial geometry, and destination in a way that is Friedkin-esque. It's a textbook, as good as the L-train underpass pursuit in The French Connection and the wrong-way freeway chase in To Live and Die in LA.. The Bourne Identity is defiantly classical action filmmaking and that's why it still seems fresh, even though it will be fifteen years old next year.

What Greengrass does is throw a camera out a window and edit together whatever footage survives. His action sequences are garbage. More, they're disrespectful to a cast and crew who presumably trained to do something, at perhaps great risk, that you can't possibly follow in this completed form. They didn't bother me as much in The Bourne Supremacy and The Bourne Ultimatum, not because they weren't a problem, but because the remainder of those films was meaty enough that I didn't really care. Alas, in their desperate play for topicality, Jason Bourne's non-action scenes are instantly dated and boring besides. Here, new spook computer wiz Heather (Alicia Vikander), taking over for old spook computer wiz Nicky (Julia Stiles), plugs away at a keyboard, turning things on and off via the Internet. She's tasked with tracking down Jason Bourne (Damon), the super-secret super-soldier who spent the first film doing what Damon does best, playing at discovering who he is, and has spent the last three films doing what Damon doesn't do well, playing a steely man-of-action. Heather finds him, of course. As a super-secret super-agent, he's very, very bad at staying hidden. Nicky, however, now in the employ of Julian Assange-ish Christian Dassault (Vinzenz Kiefer), beats her to it, and shares with Bourne new secrets that introduce Bourne's dad (Gregg Henry), who, we see in flashback, had something to do with Jason being indoctrinated into the super-secret super-soldier plot of the first four movies. Yes, suddenly Jason Bourne is The Fury.

When a film is this devoted to its MacGuffin, the MacGuffin turns into an absurdist's joke. It's that Monty Python sketch from The Meaning of Life with the guy on safari who's lost a leg to a lion that's actually two guys in a suit. Other people locate Jason as well--CIA director Dewey (Tommy Lee Jones), for one, and angry super-secret super-soldier "Asset" (Vincent Cassel) for another. The latter has a score to settle because his mission in Syria was compromised and he spent a few years getting tortured as a direct result of Jason going public. This is interesting, given that he's introduced as a CIA operative in the middle of torturing someone to death in a bathtub. The Bourne saga was always about identity--Jason's literally, but, allegorically, the American identity in a world of terrorists and liquid borders. It asks the question of whether or not we sacrifice every one of our ideals in exchange for continued existence in some bowdlerized police state: our belief in due process, our privacy, our right to truth and justice as the American Way. We're in the middle of bombing the shit out of Syria, which is also the last multicultural society in that region, thus encouraging the flow of refugees and facilitating the rise of Islamic Fundamentalism. It's not a great policy, but it does satisfy the optics for a frightened population wanting retributive blood. The film plays its part by instantly demonizing Syria, thus catering to the agenda it ostensibly seeks to combat. It wrestles with the idea, as the 2016 election does, with the verity that the United States may no longer be the world's bully. The question before us is whether we're good with that or would rather elect a strongman to re-establish ourselves as the leaders of atrocity.

Jason Bourne wants to engage you in a conversation about this, but it doesn't have anything particularly interesting to say on those rare occasions that it's at all coherent. Consider the last twenty, interminable minutes of the film, in which Dewey makes a decision that makes no sense, Jason makes a decision that makes no sense, and, in the interest of equality, Heather, too, makes a decision that makes no sense. This can either be read as a satire of our current state, in which nothing makes any sense and no one's making very good decisions, or it can be read as a screenplay that's reeled out of control in a franchise that used to be important, but has seen its importance diminish at the same pace the world caught up with its paranoia and cynicism. Although the picture mentions the problems with a global surveillance state and the inherent lack of privacy of an Internet governed by monolithic corporations and ideologues, it has neither the time nor the wit to deal with them. It was done better in The Dark Knight, which, in retrospect, is scarily prescient about our world today.

There's a Mark Zuckerberg/Steve Jobs figure, Aaron Kalloor (Riz Ahmed), who is asked by Dewey to give up the privacy information of all his website's billions of users in repayment for a devil's pact he entered into at the start-up phase of his company. The characterization compares brutally against The Social Network or Steve Jobs, and the picture's best defense is that it's a cartoon, but what kind of defense is that? Even the Julian Assange character kung-fu fights and gets the upper hand for a second on super-secret super-soldier Jason Bourne. It's ridiculous and sends the message that it thinks WikiLeaks is good, but also bad, but also kickass. Compare Jason Bourne to another Matt Damon co-production, Promised Land; Damon has his heart in the right place, it seems, but as a producer he conjures up his unkind puppet depiction from Team America. I'm not certain it's worth talking about how all the women in these films get murdered, ugly, eventually. It probably isn't. The film understands that something is on fire, but doesn't understand why, and, look!, that car just destroyed every other car in Las Vegas! Jason Bourne is bad action and bad activism. It's well-intentioned garble, and it's not helping.