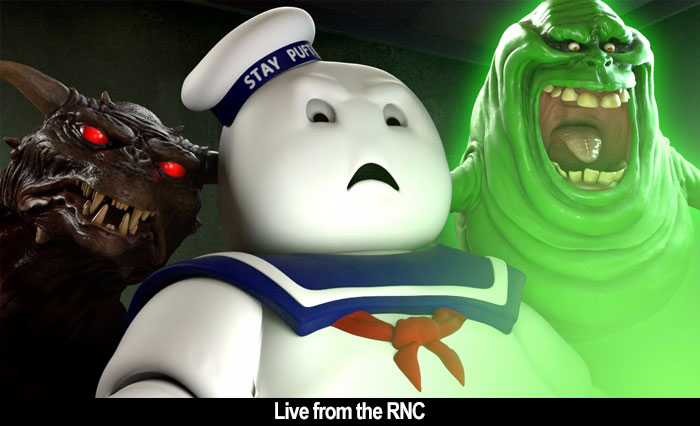 To be fair, that's not the problem with Feig's Ghostbusters. No one acts superior to the material here. They're not assholes. The problem is that every shot of the very funny Kate McKinnon, as brilliant engineer Jillian Holtzman, catches her mugging at the camera. It's like the crowd shots in this thing, where there's almost always an extra staring directly into the lens. It demonstrates extreme laziness and lack of craft and a director who doesn't comprehend why this person is funny and so highlights every moment he thinks he catches her doing it. No one's really auditing this stuff. No one cares about that. They only care that there isn't an inch of film that doesn't deliver the money shot (and incidentally if you think there's not an issue with constantly covering one of your actresses in goo, you're kidding yourself). The problem is that every shot of Wiig's Dr. Erin Gilbert is of her looking hangdog with nothing to do. The problem is that Leslie Jones plays a subway token-taker and, in a couple of scenes, is the object of hilarity because she's scairt of ghosts. It's a problem because Jones is black and this kind of thing is very, very dangerous for black actors to play. Cuba Gooding, Jr. did a similar thing in Lightning Jack and it was likewise misguided and distasteful.

I don't pretend to understand what drives these decisions, except to note that the other, white Ghostbusters are two PhDs and a beyond-genius-level engineer. Jones's Patty is sassy and does a mean Oprah impersonation. Is that self-awareness, or is it pandering? It's a fine line. Someone ask Dave Chappelle why he walked away from a mountain of money at the height of his popularity. I want to mention, too, that although the new Ghostbusters set up shop above a Chinese restaurant, there are no Chinese people in this film. I don't want one of the Ghostbusters to be Chinese, I just would've liked, since they're in a Chinese restaurant for half the running time, for there to be a Chinese extra. Maybe there aren't enough Chinese people. I'll get on that.

The film lands after months of legendarily-bad trailers that were bad because the timing was entirely wrong for trailers. In them, find Kristen Wiig doing her long, slow, stammering takes that remind a lot, in every positive way, of Bob Newhart's comedy, plus Wiig and McCarthy improvising interactions based on discomfort and what we presume is their characters' shared history. The hope was that in a feature, these bits would pay off because the characters would be developed and in the service of a reasonably coherent narrative. What's curious about Ghostbusters is that the lesson of the trailers seems to have been misunderstood, so all of those hesitations that are the foundation of Wiig's shtick are brutally truncated with smash cuts. The timing--freshly-adjusted in response to the uniform concern with the trailers, I conjecture--is now wrong for a feature-length film. There's a great story about Some Like it Hot and the scene following Jack Lemmon's date getting such a long round of laughter that Wilder went back in and recut it to give the punchline time to breathe and thus not overlap with the next few lines. Ghostbusters takes the opposite tactic by amputating punchlines--some of which might actually have worked--by immediately jumping to another scene, in another location. Often another subplot. It's jarring and disrespectful. It's like a bad reel change on 35mm. I find Wiig delightful. I love McKinnon. McCarthy is well past her sell-by date, but still fitfully amusing. They're not allowed to breathe in this film. They're not allowed to be people. They're comics who are asked by strangers to be funny. You can feel the panic roiling off this investment. The movie is too desperate to be liked to be likeable. It's ingratiating in the wrong way.

The plot, if you care, is that four women decide to capture ghosts for approval and validation. If there's an interesting thread to pull on this one, it's that the whole of the picture seems to be about the women's struggle to be taken seriously and not get called "The Ghost Girls." They talk about this more than they talk about anything else. They mostly want this validation from men, like the unctuous mayor (Andy Garcia), who would like to pretend that nothing is happening to stave off panic; or the ghost skeptic (Bill Murray) who tries to debunk them, to the disproportionate exasperation of Dr. Gilbert; or the two Homeland Security agents (Matt Walsh and Michael K. Williams), who don't really do anything except represent plot points to push the last act; or the comments sections and references to REDDIT the 'busters read aloud in shock and dismay.

Like Moranis before him, the best character in Ghostbusters is the imbecile receptionist Kevin (Chris Hemsworth), who's hired for his looks and is so stupid that when a loud sound bothers him, he plugs his eyes. Get it? He's stupider than an animal or a baby. He's possessed later, and has a big dance scene that appears to have been deleted and then moved to play under the closing titles. One of the characters remarks in the body of the film that she wonders what happened back there. Because this scene is no longer in the movie proper, it doesn't play like a joke but like a real, bona fide mystery. Eventually, big, stupid Kevin tries to take credit for saving New York City in what's maybe the sliest and only vaguely empowering moment in the entire mess. He's a goofy, dumb, white idiot, and though he was born on third base, he thinks he hit a triple. Better would be for Kevin to Remington Steele the whole damn thing (or Taxi Driver it, if you prefer) and become the face of the enterprise because no one takes three smart women and a sassy black sidekick seriously: As a dangerous white idiot? Perfect. Too late, Sigourney Weaver cameos to say a few disparaging things about men and demonstrates that even though she spent most of the first movie getting sexually harassed and wearing a Sheena Easton red dress, she can increase a film's feminist credibility just by showing up.

There are a lot of problems with Ghostbusters but this is the big one: It either doesn't know what it's about, or it's afraid to be about it. The last line of the film, before the twenty minutes of credits full of stingers and DVD bonus material, is, "That's not so terrible, is it?" It's a passive, open-ended question that critics would usually nail into the cheap seats but won't this time because, you know: courage. Ghostbusters invites patronizing platitudes, the bada-bing to a misogynist's joke, and were I in a different mood, I'd lower to respond with a "there, there, no, you were just fine." Ultimately, though, it's not fine. It's pretty sad and jumbled. Consider that most of the prologue is spent setting up the malevolence of a lady ghost (Bess Rous) haunting a tourist attraction. More time is devoted to her backstory and temperament than to any of the main characters, in fact. And the next time we see her, it's a glimpse before she gets shotgunned. This is not a good message if it's purposeful, unforgivably lax if it's not. Rather than make her the villain, the villain is nebbishy creep Rowan (Neil Casey), who the ladies will mock for being a virgin. This is not a good message, either. I mean, if a guy's a virgin, that's bad, and if a girl isn't, that's also bad. Right?

But then there's a scene where Holtzman faces off against a posse of ghosts that starts with her licking one of her pistols in an angry way before kicking ass; and another where she delivers a toast that reveals a depth of pain and longing for acceptance in female friendship that would have been more powerful were it not completely alien to her character up to that point. There's evidence there in those two moments that McKinnon's best stuff is probably on the cutting-room floor, excised because they were judged not-funny-enough (since she wasn't making a funny face?) by a brain trust terrified of having a strong female character who is complex and evolving. There's a great deal of unfortunate irony in that. This cast deserved much, much better. But, hey, if you leave your brain at the door and think of Mother England, well, now, that's not so terrible, is it?