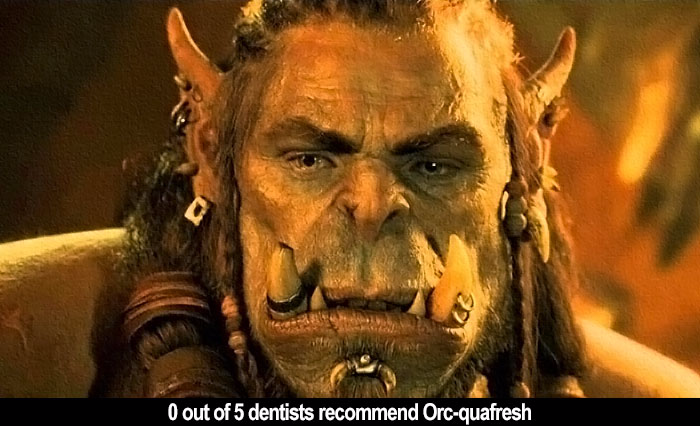 by Walter Chaw A lot of it's a mess, and I'm well and truly disinterested at this point in huge-scale battles betwixt CGI armies, but enough of Duncan Jones's Warcraft is like Apocalypto to make it at least a fascinating misfire. It shares with Alex Proyas's instantly-derided Gods of Egypt this sense that but for the grace of God these are the exact kind of Ladyhawke/Clash of the Titans/Krull movies I used to love when I was a kid home from school with a fever. They're thick with invention and the sort of risk-taking that comes with not really having much shame. Their barometer for cheese and corn is broken, too. Warcraft is a picture without a sense that it shouldn't take itself seriously and so it takes itself very seriously, and there's one moment where the heroine of the piece talks about the strength she's gained from surviving repeated, and brutal, sexual assaults that actually cuts through the bullshit to the heart of some really troubling conversations. Particularly, pointedly, as it occurs in the middle of a narrative adaptation of a videogame whose culture is infamous for its intolerance of, and ideological violence towards, women. Warcraft earns points, too, for not being sentimental about its characters--for being another 2016 blockbuster that's unafraid of dealing with the consequences of forever wars on families and other non-combatants. Also, it occurs to me that if the humans had more gryffins, the war--and the movie--would be a lot shorter.

Essentially, giant Orcs, led by a vampiric religious elder, invade the human dimension in search of more raw materials (i.e., humans) and a nice place to raise their families. The humans don't like this. There's a heroic Orc couple (voiced by Toby Kebbel and Anna Galvan) who are against their evil leader, and there's a heroic human fighter, Lothar (Travis Fimmel), serving a heroic human king (Dominic Cooper) and doubting the virtue of maybe-heroic guardian/mage Medivh (Ben Foster). It's tedious. What is interesting, though, is half-breed female Orc Garona (Paula Patton, painted green after the fashion of beautiful African-American actresses in modern tentpole flicks), who has the abovementioned line about how broken bones heal stronger. There's a scene between her and the human queen (Ruth Negga) where she's given a dagger with which to defend herself (and she does, in a scene that has more pathos than it should because of it) that feels suspiciously like one woman telling another that the world is dangerous because they have to share it with men.

In fact, the best thing about Warcraft is that it's essentially about women leaders. It's about the heroic Orc lady giving birth in a liquid void and then launching the baby, Moses-like, into a river when the hordes descend upon her. Her last act among her people? Cutting the throat of an ally--but just a little, to remind him who's really boss in these scenarios. The women are the ones who make the hard choices in this picture, while the men are guided by vengeance and chivalry and notions of nationhood and rank. There's a mano a mano battle and talks of ritual, but in the end, when everything's on the line, it's Garona's call-out of the ritual that essentially creates a temporary truce and the achievement of every goal the men in the film have sought. Her two final actions--the one with the dagger, the other with her manipulation of ritualistic patriarchy--are the spiritual granddaughters of Lisa hiding her fashion magazine in an adventure book at the end of Rear Window. Yes, there's wizard stuff and majestic locales and gryffins and things; yes, the rendering is impressive, and it's almost possible for entire seconds to look at the Orcs without marvelling at the technology used to animate them. But the real value of Warcraft is in the roughly ten minutes where it's about the cult of masculinity rather than engaged in it.

Duncan Jones is a gifted filmmaker. The best parts of Moon and Source Code deal with the consequences of technology and unfettered achievement, and Warcraft isn't different in that respect. The vast majority of it is fan service equal parts incomprehensible and familiar to the lay person, which is a shame, though Jones's intelligence and sensitivity linger there in the periphery. They're there in the movie's subtextual critique of its culture, there in the ambiguity of characters who, even while avenging dead sons, are revealed to have been bad fathers. Warcraft has real pain in it, and loss. I'm on its side the moment it has two of its brutes act like kids who've been friends their whole lives when one, playfully, hits the other one with a pebble to lighten a heavy moment. It's the worst of Jones's films without question, edited with one of those lettuce-choppers and boasting of an interminable third act, but it's still better than it has any right to be because of him. I hope it makes a billion dollars in China and buys Jones the freedom to make something that's all his next time.