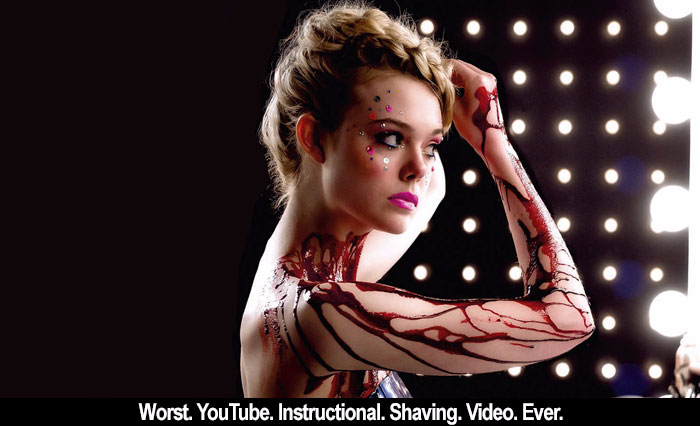 by Walter Chaw There's a quote from The Right Stuff I love that I thought about constantly during Nicolas Winding Refn's The Neon Demon: "There was a demon that lived in the air." I found in it something of an explanation for, or at least a corollary to, the picture's title, in that the demon in The Right Stuff refers to the sound barrier while the demon in Refn's film refers to, perhaps, soft obstructions of other kinds. Artificially lit. Poisonous. The quote continues with "whoever challenged [the demon] would die...where the air could no longer get out of the way." The first film I saw by Refn was Valhalla Rising, an expressionistic telling of the Odin myth--the part where he spent time on Earth (went missing, basically) before returning--that touches on the scourge of Christianity and how that relates to feeling lost, or losing what you believe in. Valhalla Rising led me to Bronson and to Pusher and then I followed Refn through Drive, which talks about the difficulties of being male, and Only God Forgives, which talks about the difficulties of being a son. Now there's The Neon Demon, completing a trilogy of sorts by talking about the difficulties of being a girl becoming a woman and an object for men, eviscerated in certain tabernacles where women are worshiped as ideals and sacrificed to the same. It's astonishing.

In execution and theme, it reminds a great deal of Jonathan Glazer's Under the Skin, another film that is confounding and uncomfortable and essentially about the ugliness of the world in general but especially if you're a woman. The Neon Demon deals with the construction of appearance and, likewise, with the inevitable result of obsessive objectification and the indulgence of base desire. It also reminds of Panos Cosmatos's epic of a drugged young woman attempting to escape an institution, Beyond the Black Rainbow; and of Dario Argento's epic of a fevered young woman attempting to escape a coven of witches, Suspiria. The Neon Demon is, in other words, rapturous to look at, saturated with intense colour suffusions that make the blood in it textural somehow, thick and crimson and slow. The first scene has young--too young--model Jesse (Elle Fanning) in a metallic blue dress (there's a Depeche Mode song about blue dresses that applies), displayed on a Queen Anne/American neoclassical chaise with hints of the Egyptian animism that will colour a later scene where she floats, throat cut, on a sea of her blood. It's unbelievably beautiful. And strange. And appalling, of course, but it's that fascinating repulsion that attends first encounters with biology, pornography, menstruation. It's the red spot in the breakfast egg: horrible--and you can't look away.

Refn suggests that all of it is horrible, this business of looking at women and reducing them to segments and provocative motions. He suggests that girls coming to sexual maturity means metaphoric death, if not literal. Certainly, it's the death of the girl. There's a sequence where models are called to walk in front of a disinterested fashion designer (Alessandro Nivola), and Refn makes the decision not to show them, but to show him not watching...and then watching. Hitchcock and Saul Bass had this same idea for the title sequence of Vertigo; the root of pornography is segmentation, and when men are engaged in sexual attraction they're party to a bloodless vivisection. When Jesse goes to her first fashion shoot, the photographer, Jack (Desmond Harrington), clears the studio and then, with his hands, paints Jesse gold. It's fetish. Egyptian animism as well, sure. But mainly it's an idea carried through all of Refn's films that the actions in which we engage are driven by ritual, carried along on strange currents through our biology. Jesse becomes the Next Big Thing, to the irritation of former Next Big Thing Gigi (Bella Heathcote) and Never-Was Sarah (Abbey Lee). Their interactions are like something out of a Cronenberg film: they're whispers in operating theatres, and the scalpel cuts are surgical. Gigi says, "Your parents are dead. How does that feel?" Later, she reviews the elective procedures she's endured in the pursuit of perfection with the pride of a hunter displaying her trophies.

The thesis of The Neon Demon, though, is the moment where Jesse stands on a diving board above an empty, concrete pool and says that she is beautiful, that she knows what she looks like and knows people would kill to look like her, just for one day. She breaks taboo. Women aren't allowed to think this way, much less talk this way. It's the most shocking moment in a film designed to shock. Jesse's friend Ruby (Jena Malone), a forensic cosmetologist by day, releases her frustrations on one of her charges before this moment gives her permission, in a sense, to release her frustrations on Jesse, too. Much will be made of the last twenty minutes of The Neon Demon, of its logical end-result of fetishization and desire and the requirement that women look a certain way and never, ever betray the ravages of time and experience. After something terrible happens, Refn shows Gigi and Sarah in a shower together, shooting it like a softcore music video, and it's as horrible as the image of Jesse cut open on a couch that opens the film. And erotic.

There's not much difference between disgust and arousal, after all, or beauty and ugliness. In the end, there's not much difference between the artificial presentation of beauty and the natural appearance of it, either. The one is just the amplification and sometimes grotesque holy sanctification of the other. The models in the picture, trussed up and pinioned, are no different, really, from the gory Catholic effigies of the Crucifixion. Indeed, Lady Bathory imagery aside, what the film ultimately implies is Mass of Holy Communion. There's another mysterious, elliptical modern work that speaks of concupiscence in young girls and the wet, jarring biology hidden beneath its sometimes-thin clapboard surfaces: Wallace Stevens's "The Emperor of Ice Cream."* The Neon Demon is Refn's take on the eternity of the temporary and what happens when you bump up against the soft barrier that separates wanting and obtaining. It would make a nice double-feature with Tom Tykwer's similarly-themed Perfume. It's edged. It's fantastic.

*Call the roller of big cigars,
The muscular one, and bid him whip
In kitchen cups concupiscent curds.
Let the wenches dawdle in such dress
As they are used to wear, and let the boys
Bring flowers in last month's newspapers.
Let be be finale of seem.
The only emperor is the emperor of ice-cream.