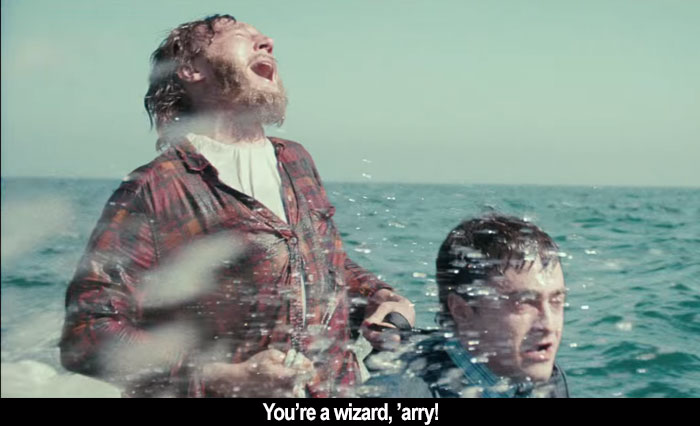 by Walter Chaw Bridging the gap between Charlie Kaufman movies, the Daniels' Swiss Army Man is one high-concept conceit carried through to every possible ontological end. It veers, dizzily, between slapstick scatalogical comedy and poignant existential philosophy, doing so with the sort of invention generally credited to silent-film clowns. Open with Hank (Paul Dano), shipwrecked, about to hang himself when he notices the corpse of Manny (Daniel Radcliffe) washed ashore. He looks for signs of life. There aren't any, save the rapid decomposition that's causing Manny to fart. A lot. Manny's farts carry Hank back to civilization, in fact, in a trailer-spoiled motorboat sequence that would be indescribable were it not right there. Like so many things in the film, it's not clear that this is "actually" happening or just a fantasy of Hank's before dying. By the middle of the picture, it's apparent that challenging the border between the cinema real and the cinema imagined is the point. If it destroys that conversation, it allows for a better one about the nature of friendship and honesty, whether it's possible to ever truly be open with another human being and, if it is, whether it would be something welcomed or rejected. Unconditional acceptance is a charming romantic fantasy, but that's all it is.

As Manny comes to fulfill the promise of the title by being a multi-purpose tool, the Daniels literalize the metaphor. If the film is about Hank's symbolic journey back to a kind of life, Manny is more than just a psychopomp: he's the means and the destination. At the end, when their personas briefly transpose and Manny becomes a more literal partner, the film has done such a good job of setting expectations that the transition isn't jarring. There are other curious flashes. Hank seems to be taking on Manny's memories at one point, and Manny whispers, "So this is the life that I've forgotten." Later, while explaining the taboo thrill a previous generation held in illicit copies of the SPORTS ILLUSTRATED Swimsuit Edition, Hank tells Manny that "girls used to be more special." There's heartbreak in these observations--heartbreak, too, of the Daniel Clowes variety when we see Hank pining after Sarah (Mary Elizabeth Winstead) along his daily commute, incapable of making a connection, reduced to taking surreptitious pictures of her with his phone and stalking her on Instagram. His longing for connection is the carrot that leads him back to society. Swiss Army Man is the better version of Cast Away, where Wilson begins to talk back. The difference is that Hank, given the chance, would likely choose to be cast away. Indeed, he already has.

Hank is an interesting choice for a hero. He's creative--brilliant, even, in the way he recreates scenes from his life out there in the wilderness with a certain Swiss Family Robinson ingenuity. Late in the game, someone will wonder at his sculptures and architecture. It's Caden's play in Synecdoche, New York: the city rebuilt in a hangar, the better to reflect the insular loneliness of the introvert in a crowd. Hank's role is as mentor to the childlike Manny. He teaches him about masturbation. He educates him in social decorum and realizes that all of the tricks people use to get along with each other stand in the way of people getting to know each other--to get to the heart of matter, in the Walt Whitman sense. There's a sequence I've seen in other films (notably Reign of Fire and Mad Max Beyond Thunderdome)--and loved every time--where Hank does a shadow-play reenactment of the movies he believes Manny should try to remember in order to make him a more complete human. "If you don't know Jurassic Park," he tells Manny, "you don't know anything." Swiss Army Man examines the fragments that make a person and wonders at the gaps between the ruins that require some form of glue to hold it all together. The picture finally falls apart when, with one reaction shot, it betrays the sketch-comedy self-loathing it's avoided the rest of the way. It doesn't do what it's supposed to do because it doesn't know how to end, but until that moment, which happens in the last five minutes, it walks an impossible tightrope with unholy chutzpah. Testament to the goodwill it's built to that point that there's an extraordinary amount of humanity even in the stumble.