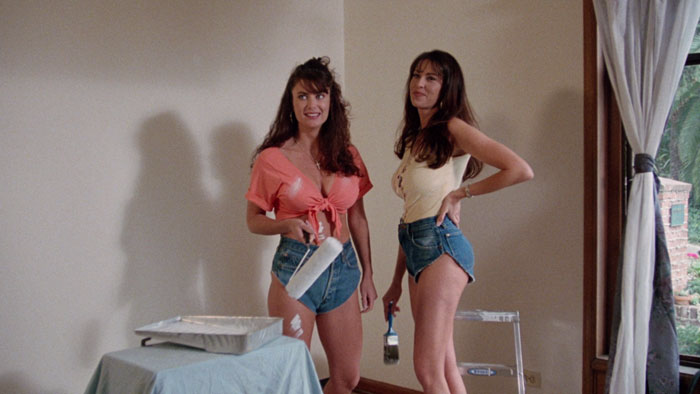 by Bryant Frazer If there's any doubt what kind of movie he's made, director Jim Wynorski dispels it in the opening moments of Sorceress, as B-movie bombshell Julie Strain appears frontally nude, lighting a candle and muttering a witchy incantation. Although she's dead by the end of the first reel, her influence lingers as she taunts ex-husband Larry (Larry Poindexter) from beyond the grave in flashbacks and sexy visions that culminate in Strain's Erica glaring up at him from her corner of a three-way, promising, "You'll never be rid of me" as he watches, sad-faced and helpless, like a kid who dropped his ice-cream cone.

The intrigue is thick: Erica, Maria (Toni Naples), and Amelia (Linda Blair) are L.A. witches in a relationship that ruptured when Erica cursed Larry's law-firm colleague Howard (Edward Albert) with a disabling car crash to further Larry's career. (William Marshall, Blacula himself, has a minor role as another lawyer from his firm.) It turns out that Larry never really loved Erica, he was merely seduced with a little of that old black magic. After a marital scuffle on a balcony ends with Erica falling to her death, Larry gets back to business with ex-girlfriend Carol (Rochelle Swanson) in an extended sex scene that climaxes with some light tongue-on-butt action, and both Erica and Amelia may have something to say about that rekindled flame. Meanwhile, Amelia is running some sort of scheme that involves framing a guy named Stan Latarga (Michael Parks) for the murder of his wife, Annie (Melissa Brasselle), who appears on screen just long enough to be shot four times in the gut. Yep, it's a bit confusing. And that's only the first 25 minutes!

Welcome to the overstuffed, oversexed world of erotic thrillers, a product of the late-'80s/early-'90s that thrived most profitably in the direct-to-video market, where they were made on diminutive budgets with a sensationalized emphasis on their display of the female form, often uncovered and typically surgically-enhanced. Wynorski, a Roger Corman protégé, was among this subgenre's key figures--a softcore Svengali, a tycoon of tits--having already remade Not of This Earth with Traci Lords, helmed The Return of Swamp Thing, starring Heather Locklear, and even taken on an Edgar Allan Poe adaptation, The Haunting of Morella, with "Baywatch" beauty Nicole Eggert. When critic Maitland McDonagh asked Wynorski what he most wanted to do, out of anything in the world, he responded, "Make a lot of money, be very famous, and get laid a lot by actresses." So you know where his head is. He's not a smuggler of subversive ideas in genre trappings, a feminist in disguise, or an artist of much ambition. He's an opportunist looking to have a good time on a movie set.

Sorceress is completely inconsequential, though it's not badly-made. Cinematographer Gary Graver was a sexploitation stalwart who had worked with Orson Welles, and screenwriter Mark Thomas McGee was one of the filmmakers behind the celebrated low-budget monster classic Equinox. I've seen a lot of dull genre movies that could learn a thing or two about pacing from Wynorski, who at least keeps things moving along quickly. (If you're unmoved by one pair of breasts, wait 10 minutes. There's another set right around the corner.) But despite McGee's contorted plotting, Sorceress doesn't aspire to be more than an efficient T&A delivery mechanism. The barely-choreographed sex simulations reach their climax, so to speak, in a mid-film reverie where Strain, Naples, and Swanson climb into bed together under purple light. It's fine--by which I mean that it would make for a better-than-average PENTHOUSE pictorial of the period and also that it beats your typical Skinemax offering for "realism"--but as always there's something faintly ridiculous about the softcore tropes of women in frilly underwear kissing and rubbing up against each other without ever getting down to the actual physical commitment of sex. (As Linda Ruth Williams once observed, "Softcore seems the Cinderella of sexual theory.")

If you're into the same female body type as Wynorski, whose films celebrate a certain pneumatic physical aesthetic with monotonous consistency, you're welcome to get off on this stuff. If you're of a certain age, maybe you can marvel at the advances in pornography distribution that have rendered the time-honoured tradition of mounting full-on feature-film productions solely for the purpose of getting women to disrobe (or, as Wynorski puts it, "pop their tops") on camera more or less obsolete in the space of a single generation. Otherwise, maybe you can take some pleasure in watching Strain, knowing that she was in the process of building a career, brick by brick, that would take her from her PENTHOUSE "Pet of the Month" days through a series of brand-building exercises that would make her a genuine star on the convention circuit--and a woman of independent means who no longer needs guys like Wynorski in her life. 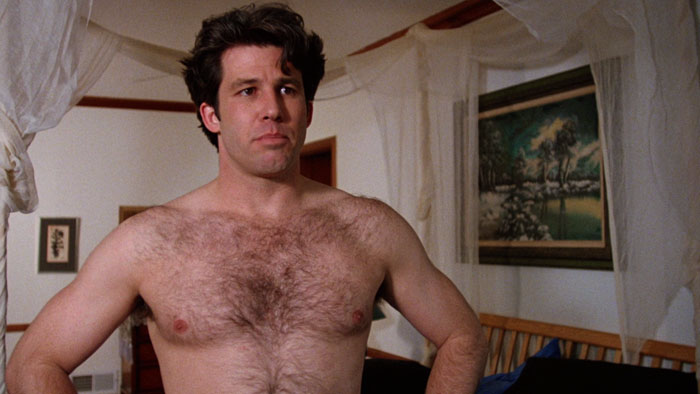 THE BLU-RAY DISC
It's interesting that Sorceress still exists in the popular consciousness, let alone that it has a big enough fanbase to justify a careful Blu-ray restoration. Synapse has done typically fine work on behalf of cheesecake nostalgists everywhere with a new 2K film scan and HD transfer from unspecified "vault materials," presented at the HDTV-native aspect ratio of 1.78:1. (The movie actually appears here under its original title, Temptress, which was changed by distributor Triboro Entertainment Group in a move that caused some confusion, since Wynorski had written the screenplay for another film called Sorceress back in 1982.) Graver's lighting is flat, presumably for reasons of expedience, but his colour palette adds some character to the image, leaning towards pastel in some of the film's more, um, dramatic sequences. And anyway, the actors look good throughout. Blacks do not appear to have been crushed, though the director-approved image is perhaps darker overall than you might expect. The transfer is clean of dust and dirt, with an underlying layer of film grain that varies somewhat in crispness and intensity. Minor artifacting is visible in darker scenes, maybe due to a video bitrate that hovers just below 30 Mbps. Audio quality is essentially unremarkable. Dialogue is clear and distortion-free, action scenes resonate with a touch of thumping low bass, and the music by Chuck Cirino and Darryl Way spreads reliably into the surrounds when the 2.0 stereo sound is dematrixed in Pro-Logic mode.

Extra features are limited to two audio commentaries. The first is a solo flight by Wynorski, who, amusingly, stops at one point to explain what's happening in the story. (Surely this is one of the more densely-plotted skin flicks in history.) Otherwise, he offers up the usual production details and behind-the-scenes anecdotes, noting that the film was shot entirely on practical locations and remembering that its distributor required him to reframe and edit the picture to remove any nudity "below the belt," which must have made the old VHS versions of this quite a bit duller than what we have today. At one point, Wynorski goes off on a quick rant about a documentary crew that shot behind-the-scenes footage on Sorceress he thinks was turned into a hit-piece attacking the makers of B movies. He reveals just enough information about it for the savvy viewer to glean that the film in question is called Some Nudity Required, that it has been bootlegged and posted in its entirety on YouTube, and that Wynorski is portrayed in it, fairly or unfairly, as a noisy, sexist boor. (Perhaps he should have kept quiet about that one.)

On a second yak-track, Wynorski is joined, for whatever reason, by make-up effects legend Tom Savini, who is watching the movie for the first time. While the two obviously have a great time conversing, Savini seems willing to say anything that pops into his head, leading to occasionally incisive dialogue with the director. "Those aren't real," Savini notes as Strain's bigger-than-life bosom fills the screen. Wynorski's tongue-in-cheek response: "What's real in this world?" Unbowed, Savini keeps up the criticism. During an extended sex scene, he asks, "This has what to do with the plot?" and Wynorski can only respond, "Nothing." When Kristina Ducati drops her towel for the requisite shower scene, Savini perks up a little: "If only someone would come in and knife her to death." But he really gives Sorceress a machete to the face while watching its big coup du cinema, when the film's female threesome transpires in Wynorski's purple haze. "To me," Savini says, "it's like watching an autopsy." 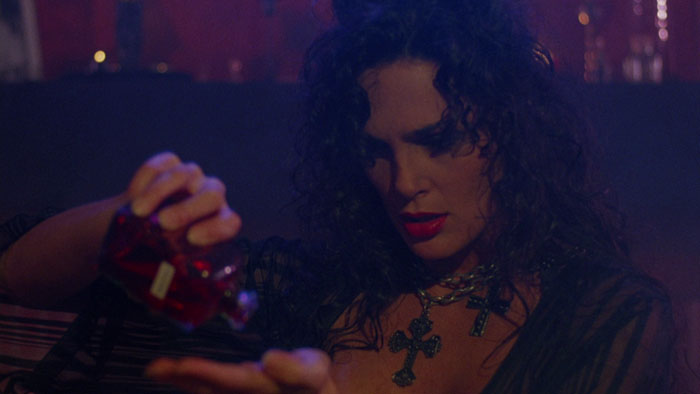