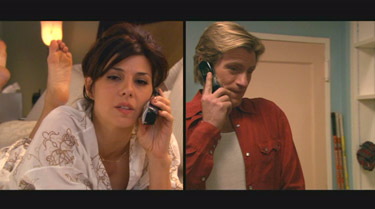 by Walter Chaw SPOILER WARNING IN EFFECT. As much a product of our post-apocalypse as "Deadwood", "Rescue Me", like that David Milch masterpiece, is about the flattening of society and the reconstruction of it according to masculine, animal logic. Indeed, it's a good argument that society has never been constructed any other way. As such, the series, Denis Leary and writing partner Peter Tolan's brainchild and baby, demonstrates a wonderful insight into the male psyche: how it deals with grief, as well as its caveman attitude towards women. The two things are compatible, after all, and authors no less than Faulkner and Freud eventually gave up trying to write women. The only sensible thing is to let the nightmare of "Rescue Me"'s exuberant misogyny wash over like a warm tide; why fight it? I've had a hard time watching Leary without wishing that they'd cast him as Garth Ennis's John Constantine, but it occurred to me some time in the middle of "Rescue Me"'s third season that Leary's firefighter Tommy Gavin is as close to a consort of the devil as Constantine ever was. Perhaps closer. Tommy's infernal, even demonic (I see that now), and the show he haunts is a very specific vision of a very personal hell. Women are bitch goddesses here: temptresses of mysterious purpose who reward misdeeds, punish valour, and steal children. They're succubae that distribute venereal diseases and, worse, get pregnant. I wonder if the premise of the whole shebang is that nobody survived 9/11--that no matter the misdeed, Tommy is rewarded with gardens of earthly delight, the price being that he lives with ghosts in an empty city that periodically bursts into flame.

"Rescue Me" reminds of the macho ethic of "The Sopranos", but it jettisons the pretense of self-consideration, replacing psychoanalysis with gallons of alcohol, prescription drugs, fits of rage, and, in this third go-round, an unusual--for a non-"Oz" weekly serial--amount of rape. Like "The Sopranos", too, the price of happiness is a giant crosshair, and there's a surprising volume of casualties among the secondary cast. Every man suffers in this show--every man burns, if you will, in archaic and complex moral crucibles, even as "Rescue Me" laudably resists making its firefighting set-pieces into allegories for the greater drama. There was a female firefighter in the first couple of seasons--no more. By year three, the series is focused to a pinprick on how men bleed.

With previous seasons having had Tommy lose his wife to divorce and young son to a drunk driver his uncle killed on said driver's way to court, this one begins with an episode appropriately titled "Devil." Though I used to think the show was melodramatic in setting its characters up as Biblically- (I should say "Miltonically-") afflicted penitents, if you run the idea that Tolan and Leary are actually playing with the idea of a semi-literal damnation up the flagpole, well, I'm inclined to salute. Issues addressed in this third cycle include homosexuality, incest, the abovementioned rape, and, briefly, a perverse romantic roundelay between Tommy, his ex-sister-in-law Angie (the just-luscious Marisa Tomei), Tommy's brother/Angie's ex, Johnny (Dean Winters), and Tommy's ex, Janet (Andrea Roth); and between Tommy and the widow (Callie Thorne) of Tommy's cousin (James McCaffrey). It sounds like a soap opera because it is, but the only characters developed at all in "Rescue Me" are male--the only ones with complexity and, in the case of Tommy, a serious payload of ambiguity. When he rapes his wife in the fourth episode ("Sparks") in a scene that's sort of startling in its violence, not only does his wife seem to like it, but his brother is left looking idiotic: the deserved cuckold. Rather than leave anything to interpretation, a later episode sees Janet in Merry Widow and trench coat, paying Tommy a booty call.

Acknowledging the nuances of the situation to be complex, as presented by "Rescue Me" and its harem of cardboard fatales, the best read of the situation is that Janet is a fruitcake who likes to be raped and, worse, that Tommy is a rapist, unrepentant and empowered in this universe with the justification for that kind of violence. When he beats up his brother upon discovery of his brother's affair with Janet, it's less than when he pisses on Johnny's leg in a men's room, which is less again than an echo of Tommy's episodes of scary violence as he throws Janet against a wall and holds her there while she clenches his balls in a fit of either ardour or self-defense. More so than in previous seasons, there are no real-world consequences to Tommy's actions and reactions; at this point, police intervention and social workers are replaced with Greek karma (firefighter Franco (Daniel Sunjata) loses his daughter to a man-eater (Susan Sarandon) with an empty nest) and, in the season's finale, a bizarre escalation of Tommy's hallucinations and the series' propensity to occasionally jump the shark. The worst miscalculation of several is Tommy's psychotic sister Maggie (Tatum O'Neal), that particular bad judgment aggravated by the appearance of a long-lost deaf-mute sister in the season finale. In fact, episode 12, "Hell," ends the thirteen-episode season so handily that the actual conclusion, "Beached," feels like an epilogue. Even the rhythm of it is sprung, a shuffle of the feet instead of the usual over-balanced kineticism--with much of the episode given over to talk about knowing well enough when you're dead to just lay down. Still, all things considered, "Beached" is not a bad resolution to the season, as the show's ladder crew visits the 9/11 memorial and comes to a haunted realization that their lives are an endless, amoral, irrational march to death. Funny to find Foucault, of all people, in this urban heart of darkness.

THE DVD
Disc Four of Sony's four-disc "Rescue Me: The Complete Third Season" sports a Gag Reel (7 mins.) that's unusually good thanks to Leary's improvisational skills and Steven Pasquale's ("Garrity") sharp sense of humour--not to mention his dead-on Gollum impersonation. Meanwhile, "Behind the Hose" (9 mins.) is mostly behind-the-scenes stuff that runs like a handheld video journal and only rarely falls into hagiography--for special guest star Sarandon, for instance. What I do appreciate is how the rough machismo of the series allows the actors to "come out" as men--like in war or prison. The first batch of "Deleted Scenes" (11 mins.) is generally fluff showcasing more of Toland/Leary's highly-stylized dialogue and increasingly homophobic set-ups. I'm not coming down on the series for hating gays and women, mind (the series wouldn't make much sense any other way), merely observing that for as bad as it is, it could be worse, and decisions seem to have been made along the way to soften the ugliness. Finally, a preview of the fourth season spoils the cliffhanger of the third and joins trailers for "Seinfeld" Season 8, Stranger Than Fiction, Rocky Balboa, and Meatballs. Going back, Disc One features "Behind the Smoke" (25 mins.) a "making of" reel that is the typical interview stuff interspersed with clips from the show--shockingly conventional for a series that enjoys the random use of the word "nigger" in a couple of episodes as the catalyst to a budding love affair. Chief revelation is that the creators were conscious of "pulling the rug" out from under its characters whenever it looked like things were going to get better for them. I appreciated, too, actress Roth's candor in observing that many of the things in the show were morally unconscionable and caused no little personal soul-searching in her portrayal. More, Roth says that late-season sacrifice Johnny Gavin was possibly "too good" to survive in this world.

A "'Rescue Me' Comedy Short" (13 mins.) suggests an alternate take that conveniently elides a racial tension subplot summarily dropped from the show besides, while a ten-minute interactive "Location Tour" of the actual locations featured in the series continues the supplements. Three deleted scenes (5 mins.) of questionable value round out this particular platter. Disc Two contains "Being Denis Leary" (3 mins.), an irreverent but ultimately unsuccessful piece on Leary's stand-in: There's potential here for something interesting (something along the lines of Salman Rushdie's analysis of a stand-in's photo from the set of The Wizard of Oz), but this ain't it. "Going to the Gay Place" (5 mins.) isn't what it appears to be but instead a "Punk'd"-like scenario in which fake scripts are sent to Pasquale and Mike Lombardi commanding the two to engage in the love that dare not speak its name. Entertaining despite itself, the gag speaks volumes in microcosm to the appeal of the series. Disc Three starts with "The Bravest Traditions" (6 mins.), which goes in brief over the rite and ritual, historically, of firemen. "Fighting Fires in a Vertical City" (5 mins.) consults the show's technical advisors on the difficulties of fighting fires in high rises and subways. Three "Deleted Scenes" (4 mins.) are, once again, seemingly cut for good reason. Every episode of "Rescue Me" proper is presented in crisp 1.78:1 anamorphic widescreen with extravagant DD 5.1 audio; the series has earned the pole position in FX's original-programming schedule and boasts a technical budget commensurate with that status. It won't blow you away, but sequences inside burning buildings have a nice, immersive atmosphere, while the A/V the rest of the way is sharp and vibrant. Also available on Blu-ray. Originally published: June 26, 2007.