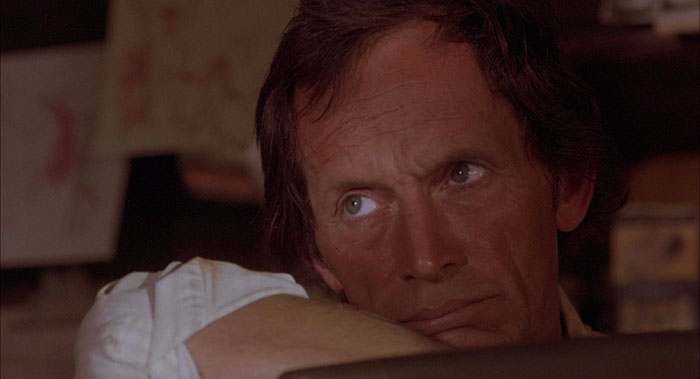 by Walter Chaw F/X legend Stan Winston's directorial debut, Pumpkinhead is a strong piece with a few indelible moments. The first is when a country witch summons the titular bogey using the blood of a dead kid; another is when that same creature stalks past a kitchen window like an early draft of the Alien hybrid from Alien: Resurrection, with a similar miscegenated backstory. Between and around these high points is a boilerplate vengeance intrigue that literalizes the sins of the fathers in a Passion Play surrounding widowed dad Ed (Lance Henriksen), who, in blind grief over the loss of his adorable young son (Matthew Hurley), binds himself psychically, and physically, to the monster he's raised as his avatar. It's a Frankenstein story in that way, one with shades of E.T.--the bond between Elliot and his wrinkled flesh buddy is reconstituted in the relationship between Ed and an eight-foot monstrosity that's a little bit one of those naked cats and a little bit Giger. An impressive shot establishing Pumpkinhead as he strides into the skeleton of an old, broken-down church in blue half-light suggests more than the triumph of practical effects on a low budget and tight shooting schedule: it suggests that the film's simplicity could--should--be read as pagan folktale, complete with cautionary spiel, brutal exposition, and a surprisingly strong moral grounding. Pumpkinhead is literally about the impossibility of objective violence--every action, no matter how intimate or remote, has a spiritual impact on both victim and perpetrator. It's a surprisingly rich vein for something like this to mine, and it resonates.

Pumpkinhead distinguishes itself early on in covering the typical set-up of privileged kids venturing into the wilderness for a weekend's debauch from the point-of-view of the imposed-upon bumpkins. Winston understands that the heroes of The Texas Chain Saw Massacre and Deliverance were the family units uprooted from tradition by tourists and other interlopers. It's the intrusion of industry into Eden; it's the delightful idea that Eden is only a hillbilly's idea of Paradise. Ed and his bespectacled son play in the yard, get their hands dirty, and wash them together beneath a hand pump. Ed tells the lad about his own grandmother, how thin her skin was and how delightful was the feeling of her hands rubbing together with his own under a cold spigot. Henriksen is one of our most distinctive character actors. He's capable of real warmth, and his performance in this is complicated and rich. He demonstrates a compelling paternal quality, moves to wrath easily, then comes full circle as he comes to terms with the idea that his anger is perhaps disproportionate to the offense and empty besides. Starting out in stuff like Close Encounters of the Third Kind and Dog Day Afternoon, Henriksen is, like Christopher Walken, too often dismissed as a personality rather than a performer of skill and nuance.

When Ed's son is accidentally killed by the older kids having a laugh, Ed turns to Old Hill Woman (Madeleine Taylor Holmes) for redress. She conjures a demon for Ed that Ed dimly remembers from a terrifying night in his childhood when a neighbour tried to get into the family's house to escape from something. Little Ed saw the cost of his father's intractable inhospitality, along with its benefit. While much of Pumpkinhead is standard stuff featuring the dumb rich kids getting picked off at moments of high hubris, a few of these dumb rich kids reveal themselves to be complex, kind even, just caught up in a bad event and trapped within its consequences. Pumpkinhead has one clear villain, but the rest are, you know, kids. Pumpkinhead the demon doesn't care about all that. But Ed does. Forced to witness the carnage through flashes of telepathic empathy, Ed becomes the "final girl" of the piece, taking up arms to combat the thing he's wrought in the often-futile quest to save a few of the kids he had wanted so badly to murder. Vengeance is easy, the movie says, so long as the collateral of that vengeance is hidden. It's a heady thought for a horror movie--a monster movie, really--and the kind of thing our biggest blockbusters are considering now as their costumed kaiju knock down entire cities full of bystanders.

Henriksen's remarkable performance carries the bulk of the weight of the piece. He's committed to Ed as a character composed of memory and humanity. Ed wants justice for his boy, but he's not prepared to mete it out indiscriminately. It's a New Testament approach to Old Testament solutions: the head battling the offal. The final confrontation, mirrored in Michael Almereyda's equally-underestimated The Eternal (a.k.a. Trance), sees Ed doing the calculus on what it will take to send his creation back whence it came. It matters more, we care more, because of what Henriksen has done with the character to that point. In a flash, if only for that flash, Pumpkinhead feels like one of the Dardennes Brothers' Christian parables. And, fortunately and appropriately, the monster in this medieval play is awesome. 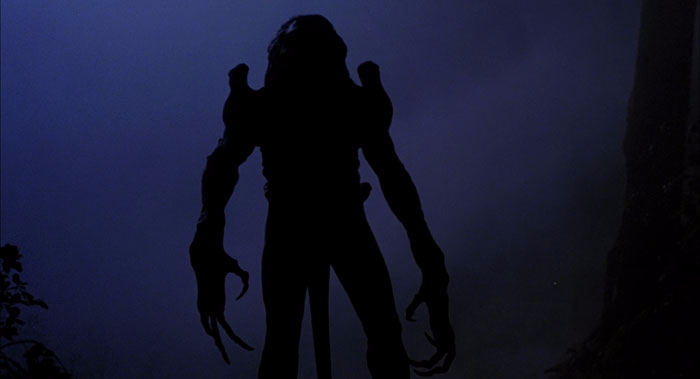 THE BLU-RAY DISC
Scream Factory brings Pumpkinhead to Blu-ray in a sterling presentation with a 1.85:1, 1080p transfer. Shot mostly in shadow to shroud the creature in mystery (and to de-emphasize any seams in its suit), the film sports a decidedly blue/orange palette as befitting a movie about a night-walking demon with a pumpkin for a parent, and its extremes have been dynamically preserved for the first time on video. The scenes in the witch's hut are extraordinarily detailed, inviting new appreciation of the craggy set dressing. A note on the make-up effects for the Old Hill Woman: they're beyond superlative--scary and convincing in equal measure. Old-age makeup tends, for me, to be distracting and ineffective, but what Winston's team accomplishes here is the stuff of nightmares. Anyway, the temptation for a low-lit, low-budget production going through HiDef mastering is to digitally "correct" and enhance the shit out of it. The good news is that the image on this disc is artistically faithful, clean as a first-run print on opening night, and, what's the term? Filmic.

A 5.1 remix in DTS-HD MA shares time with a 2.0 DTS-HD MA option that more closely replicates the original Ultra Stereo soundtrack. I prefer the latter from a historical perspective, but what embellishments there are in the 5.1 mix (a more aggressive use of the rear channels--especially in the exterior sequences; deeper rumbles from the subwoofer) prove compelling and thoughtfully-engineered. Both are worth a listen. Meanwhile, a feature-length yakker teaming co-screenwriter Gary Gerani and F/X guys Tom Woodruff, Jr. and Alec Gillis (moderated by Scott Spiegel) is rousing stuff, full of laughter and energy, that covers everything from proposed titles ("Vengeance of the Demon") and concepts to specifics of the shoot and makeup gags that went well...or awry. It's an essential listen, and Spiegel does yeoman's work as moderator and fan.

Gerani opens the retrospective making-of "Pumpkinhead Unearthed" (60 mins., HD) by talking about the genesis of the character from the first appearance of the word Pumpkinhead in a poem, drawing connections along the way to the Creature from Creature from the Black Lagoon. Producer Billy Blake digs into the scripting process and, like the others interviewed, speaks of the late Stan Winston in the warmest possible tones. A story that persists is how Winston was manic and always doing three things at once. The candle that burns brightest and all that. Various surviving actors remember the collegial quality of the shoot (including some Method stuff where people stayed away from bad boy John D'Aquino); I particularly enjoyed hearing Kerry Remsen say how she was there for Cynthia Baines's part but fell into the "Maggie" role because of her emotionality. Actress Holmes tells a charming story about toads and how they proliferated the set (shades of Herzog's experience with monkeys in Aguirre and rats in Nosferatu), and I was somewhat stricken that Leonardo DiCaprio's "grizzle" voice from The Revenant owes a debt to Holmes's performance in this. Tons of behind-the-scenes B-roll punctuates this exhaustive doc.

"Behind the Scenes" (7 mins.) montages upscaled footage of creature tests and should prove interesting for the fan of SyFy's "Face Off". "Night of the Demon with Richard Weinman" (16 mins., HD) finds the producer in fine form discussing the origins of the film from a funding perspective. Herein the complete "Pumpkinhead" poem by Ed Justin is submitted for your approval. It's not great. Weinman also reveals that it was he who didn't want Pumpkinhead to be a typical spam-in-a-cabin flick. "The Redemption of Joel with John D'Aquino" (14 mins., HD) sees the actor reflecting on the good times he had playing a bad guy with a hot girlfriend and a hot rod, while "The Boy with the Glasses" (14 mins., HD) interviews the very, very happy Matthew Hurley, who remembers how much he loved the shoot, Lance Henriksen, and everything else. He seems very nice. "Demonic Toys" (5 mins.) is toymaker Jean St. Jean's valentine to the Pumpkinhead design, and, last but not least, "Remembering the Monster Kid" (50 mins., HD) is a loving tribute to Winston from his creature-shop guys. They recall how Winston gave them the keys to the kingdom to do whatever their imagination allowed on this project; as if his loss wasn't sad enough. A lengthy animated stills gallery, Pumpkinhead's theatrical trailer, and trailers for Motel Hell and Without Warning round out the disc. 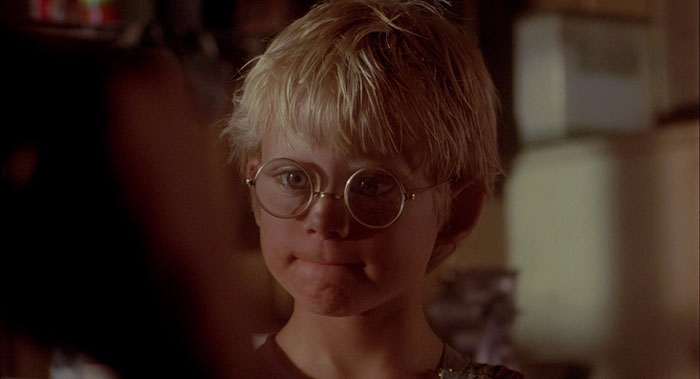