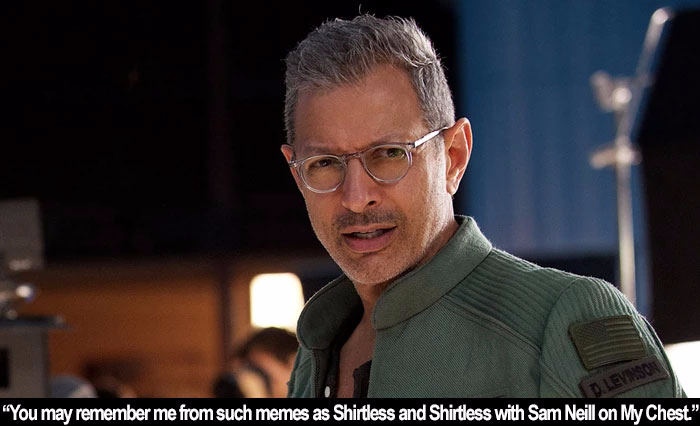 by Walter Chaw About a third of the way through the slog of Independence Day: Resurgence (hereafter ID4.2), the hopelessly-misguided and bellicose POTUS (Sela Ward), dressed smartly in a pantsuit with her hair pulled back in a severe-but-sensible bun, makes the first of a couple of really, really stupid mistakes before being executed off-screen by the alien scourge. And good riddance, for in her place rises man-of-action legacy POTUS Whitmore (Bill Pullman), suffering from some kind of alien-inflicted dementia but, you know, a man who hears voices and occasionally lapses into a coma is still better than a woman, amiright 'murica? High five. There's also a younger, less-demented POTUS on standby, Adams (William Fichtner), who is also obviously preferable to a woman. (High five.) There's a heroic team of fighter pilots that reminds me a lot of the Thunderbirds or the Power Rangers (because there's a Chinese one--the surprise is that her plane isn't yellow), and then there's Whitmore's now-grown daughter Patricia (Maika Monroe), who gave up flying to care for her demented father but is back in the cockpit again, though she still needs her flyboy fiancé, roguish Jake (Liam Hemsworth), to save her in the end and she STILL almost shoots him because she's scared and has a vagina. This is Roland Emmerich's world. Try to keep up.

So twenty years ago a distended alien invasion happened, crisping Harvey Fierstein, possessing Data, and initiating Will Smith's brief reign as Box-Office King. The aliens blew up a few major landmarks with the aid of terrible CGI, but dogs generally survived. Luckily, the good guys, led by computer guy David Levinson (Jeff Goldblum) and his super-Jewish dad (Judd "The Catskills Are Calling" Hirsch), fatally uploaded Windows NT 3.1 into the Mothership and crashed their entire invasion force. Well, those space bastards are back, this time piloting a ship 3,000 miles in diameter that slips by our monitoring stations on Saturn and the Moon. Whoops. Meanwhile, on Earth, a girl president is fucking everything up, I mean constantly. Also, there's teen romance and teen angst and a rivalry between Jake and the son of Smith's character, Dylan (Jessie T. Usher), who was a mush-mouthed reaction shot in the original and is now a complete cipher I can't even visualize in the rearview. I'll say this, though: at least he's not played by Will Smith's actual son. In flashback, we learn that Dylan and Jake--whoa, wait a minute, the aliens are back and attacking again, and there's lots of fire and stuff, plus a talking computer girl ball. Someone's accountant has followed Levinson to the moon in tow with an African warlord, Dikembe Umbutu (Deobia Oparei), who is spirit-bound to the bad guys and advises people to fight the invaders with machetes like his people did for ten years after the aliens went into hibernation because...it doesn't matter. Anyway, everything turns out OK except there's an aggressive setup for another sequel. And a school bus. There's a school bus.

ID4.2 is staggeringly poor, which makes some of its decisions sort of fascinating. Like having a female President who is instantly the worst caricature of the office until Trump gets elected. (Every one of her decisions is horrible. It's probably why no one tries very hard to protect her from the bad guys.) Or like having some secondary twerp hot for a Chinese girl pilot (Angelababy), setting the stage for the most popular type of miscegenation circa 1944, Pacific Theater. It's also interesting to watch the interplay between the accountant (maybe he's a dentist, I have no idea)--played by one of the quintet of screenwriters, Nicolas Wright--and the African warlord. At the end of it, Dikembe intones to this nebbish in his Beasts of No Nation accent that "you have the soul of a warrior," to which he replies, "That's the nicest thing anyone's ever said to me." To review: It's a good thing to have minority characters and women in powerful positions, and it's a bad thing to pander to the myth of Asian sexuality, African aggression, and feminine instability. It bears mentioning, too, that when Ripley tells the Alien Queen to get away from Newt while calling it a "bitch," it's a bracing bit of feminism in a traditionally testosterone-bound genre. Whereas when a young African-American actor calls the Alien Queen a "bitch" while shooting her in the back here, it's kind of a different moment. It's tempting to believe that ID4.2 has good intentions, but it's hardly capable of following through on any of them, meaning that probably all it really wants is apologists. Fans of the first one, rejoice: it's only worse because Randy Quaid isn't in it to offer it some extra-textual discomfort. A thing balanced out by it being about half as long as Independence Day. Did I mention the school bus?