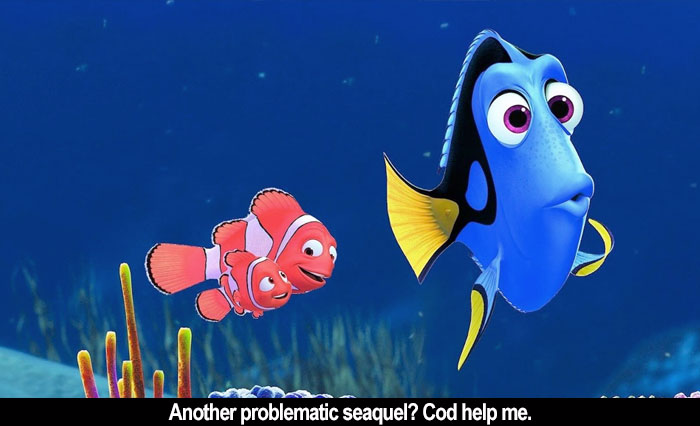 by Walter Chaw Credit is due Pixar and writer-director Andrew Stanton (co-directing here with Angus MacLane) for wanting to right what I don't know anybody really perceived as a wrong. I remember thinking when I first saw Finding Nemo that Dory's inability to retain short-term memories was a product of her species. In the new Finding Dory, it's revealed to indeed be a mental disability, one that her parents (voiced by Eugene Levy and Diane Keaton) worry over a great deal in a series of flashbacks. They create coping mechanisms for their daughter. They devise a literal shell game so that when Dory (Ellen DeGeneres) inevitably gets lost, she can find her way back home. It's an interesting tactic to take, this mild scolding that what was funny at first is in fact a debilitating, dangerous disorder. And a good portion of the film looks for ways to valorize Dory's condition, to avoid making her the butt of jokes or an object of pity. For the most part, it does this by surrounding her with characters who also have a disability: Hank (Ed O'Neill), an octopus that's lost an arm ("Septipus!" says Dory, "I can't remember, but I can count!"); and Destiny (Kaitlin Olson), a hopelessly myopic whale shark. Lest we forget, Nemo (Hayden Rolence, taking over from Alexander Gould) has a deformed fin, something he flaps at dad Marlin (Albert Brooks) after Marlin says something disparaging about Dory's memory issue.

It all gives one that mild feeling of having a finger wagged at them for 105 gorgeously-animated minutes (though a key distended sequence is unappetizingly shot in a bilge pipe through a puke-green filter), a feeling that we shouldn't laugh at adorable Dory's plucky optimism in the face of a terrible defect, but rather emulate it. Call Stanton the anti-Brad Bird, in that way. Everybody's incredible, you cad. Late in the game--or in the middle of the game (it only seems late because the pacing's off)--Marlin and Nemo find themselves in a rough spot and try putting themselves in the mindset of "What Would Dory Do?". An interesting thing to insert Dory into a popular "Christ" meme, made more so because what Dory would do is impulsive, disorganized, illogical, maybe deadly. It's psychotic behaviour, since Dory has a problem. Marlin, on the other hand, is repeatedly chastised for being careful. I watched Finding Dory with my kids; I don't think acting heedlessly and hoping for the best is a lesson I want them to internalize. Even the picture has doubts when Dory grows fearful and anxious the more she grapples with the idea that her disability has put herself and her loved ones in constant peril and misery. If the first film is about coming to terms with the horror of the world, this sequel is about coming to terms with the horror of the self. It's about tolerating difference and hoping that doesn't kill you. The final sequence is a horrific one involving a runaway truck on a packed turnpike, and it's not much fun.

Finding Dory is nothing if not intriguingly perverse. Hank is a mimic who will remind Pixar fans of the bad guy from Monsters, Inc.. He's so terrified of the open ocean that he conspires to steal a transfer tag at the marine institute where he's housed in order to continue living in captivity. It leads to a moment at the end (the real end this time) where a truck full of captive fish chant "release, release, release" in favour of Hank running away to freedom with Dory, ignoring that they're essentially expressing their own captivity. This is a subversion of the first film's ending, in which the hero sidekicks wind up in plastic baggies floating on the ocean, doomed to certain death. But Finding Dory cheats. It provides the feel-good Spielberg closer, all the way through to Hank's decision, made inexplicably and suddenly, to betray his carefully-crafted character, just because it's time to inaugurate the last plot point. (It betrays an ideological tension between Pixar's penchant for trending towards dark and Disney's allergy to the same, perhaps.) Anyway, that's the new stuff. The old stuff is returning favourites like the stoner turtles and the long-suffering school teacher Mr. Ray; there's even another gag involving mollusks inking in fear that now leads to another extraordinarily-laboured celebration of Dory's suicidal rashness. You feel a little bad laughing. I don't know what I expected from Finding Dory, but it wasn't a rap across the knuckles.