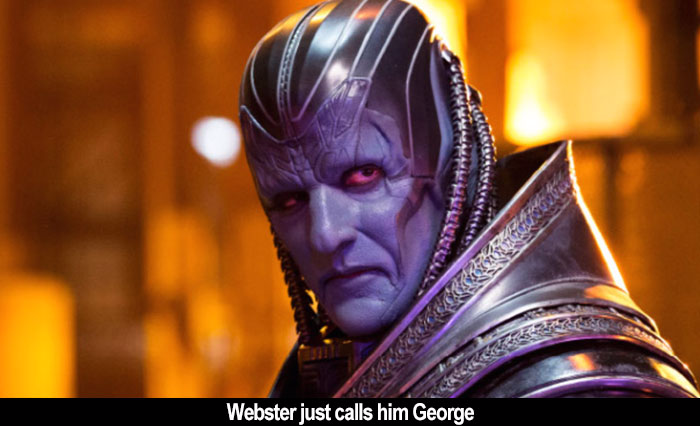 by Walter Chaw I know the sample size is small, but Bryan Singer's X-Men prequel trilogy (we'll call it his, since he produced Matthew Vaughn's X-Men: First Class), culminating now in X-Men: Apocalypse, is the far superior prequel trilogy. If you were so inclined, you could find in them--and in all of Singer's work (just like Victor Salva's across the genre divide)--assimilation melodramas: tales of the struggle with being born different, complete with abilities and...urges. There's explanation there of why Singer's films are always about alienation, best when dealing with teens, and critical of the laws and systems that would condemn things that are natural as criminal. Matt Zoller Seitz recently wrote about the problem with believing that Woody Allen is likely a child abuser/pedophile and still watching, still sometimes enjoying, his movies. I was taken with how the stain of that knowledge on the viewer never really goes away. When I watch Singer's work, which I tend to like a lot, never more than ten minutes go by without me wondering whether what people have said about him being a serial abuser and statutory rapist is true. If it is, it complicates this reading of his films. He's a little like Elia Kazan in that respect; I wonder if their message is meant as apologia--if it's repugnant in its human fascination.

Whatever the issue with Singer, his X-Men movies were always best when dealing with the pain of identifying as different and getting shunned by friends and family. His prequel trilogy is generally a creation mythology for the titular superhero group but specifically for arch-villain Magneto (Michael Fassbender), whom we track from childhood--separated from his parents in Auschwitz--all the way through to this instalment, where he coaxes the earth to swallow the camp whole. It deals in a uniquely blunt way with the idea of religion in its creation of an omnipotent hero, Professor X (James McAvoy), and introduces in X-Men: Apocalypse a villain in Apocalypse (Oscar Isaac) who's almost as dangerous in the scope of his power. It introduces, too, an explicit conversation about the superpower '80s, when Reagan positioned, along with Thatcher, our nuclear weapons as the deterrent to "help to keep the peace." The decision to set a film subtitled "Apocalypse" in the middle of the Reagan Cold War era is exceptionally smart and on point. It also allows for shoulder pads, teased hair, and a Thriller jacket. The picture's midpoint finds Apocalypse and Professor X "joining" forces to launch Earth's entire nuclear arsenal into space as a show of power and pronouncement that the Old Testament days of vengeful gods interested in grand, megalomaniacal point-making were the good old days after all. It ends with the most pacifist of our defenders deciding that it's probably a good idea to militarize. You know, just for self-defense.

Superheroes are very much like Giotto's painted images of magic and glory, or marble sculptures capturing ideals of heroism and perfection. The only aspect of superheroes that Zack Snyder gets right, frankly, is their fetishization of the human form. X-Men: Apocalypse begins in ancient Egypt with a stunning set-piece showcasing the "birth" of Apocalypse in the bowels of a pyramid. A time-tunnel credits sequence hits key touchstones in history; later, Apocalypse learns, Starman-like (Superman-like from Singer's Superman Returns), about all the atrocity that's occurred in his absence. It's fantastic. Also fantastic is Wolverine's cameo as "Weapon X," the Quicksilver (Evan Peters) bit (an extended version of the one from Days of Future Past and obviously tacked-on, given that sequence's instant-classic status), and a very subtle scene in a Polish wood where Magneto is betrayed, again, and made to feel the alien in his adopted homeland...again. There's a point at which the returns diminish, but Fassbender is a tremendous actor and he locates that loneliness once again. Here's lobbying for the next film to be a standalone Magneto showcase.

The key to the picture is one of its quieter moments, as Professor X tells Apocalypse that Apocalypse could never win because he's "alone." The truth is that neither of them are alone. Professor X's cult of personality is populated with ideological drones who believe that people are good and worth saving; Apocalypse's is anchored by a quartet interested in becoming the best version of themselves. It's Rousseau vs. Ayn Randian self-interest. What's interesting is that, at the end of it, the Good Guys have been molded by society into a greater self-interest--or, at least, self-preservation. We're the good guys, see, and it's our job to make our walls high and our soldiers well-trained and heavily-armed. The better to keep the peace. X-Men: Apocalypse levels cities, too, as is the fashion of kaiju eiga, but it spends, laudably, an inordinate amount of time with casualties. A policeman is humanized in the seconds before his murder; a group of metal factory workers are established as ordinary guys with families who will mourn them; a battalion of security personnel is slaughtered in a terribly visceral way. Singer lingers on the fallout of "superpowers." Even Stan Lee's cameo is unusually human, almost sobering. Tellingly, Singer reserves the most explicit deaths for followers of Apocalypse. They're folded and mutilated, crushed beneath rocks, exploded in airplanes, and derided from afar. Singer's prognosis for apostles of the wrong god is grim. I do wonder, though, as the heroes of these operas evolve into a progressive war party, if the prognosis for the good guys isn't grimmer yet.