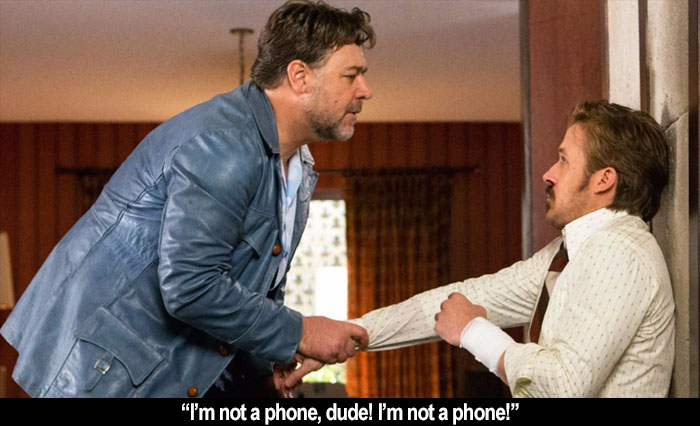 by Walter Chaw Shane Black's The Nice Guys is a delightful fusion of John D. MacDonald and Gregory McDonald; if it had a cover, it'd be painted by Robert McGinnis. It's California noir, no doubt, the love child of The Long Goodbye and Inherent Vice, but with the flip social commentary and occasional bouts of ultra-violence found in Carl Hiaasen's Florida noirs. Sufficed to say that Black, who's often spoken of his love for crime fiction, has distilled pulp here and with his directorial debut Kiss Kiss Bang Bang into breezy, post-modern concoctions. The Nice Guys is as smart as it is inconsequential, as brutal and exploitive as it is a commentary on brutality and exploitation. More than anything else, it's a very fine critical pastiche of the kinds of books you read in an afternoon because they're thrilling, socially irresponsible, and afire with misogyny, nihilism, and Byronic macho bullshit Romanticism. But cool, baby, and stylish.

It's interesting to consider that despite a central duo of Robert Downey Jr. and Val Kilmer, it's Michelle Monaghan's heroine/fatale in Kiss Kiss Bang Bang who was a connoisseur of the pulp form--the central clue to the intrigue and a clue, as it happens, to where Black's sympathies ultimately lay. There's another little girl lost in The Nice Guys, Holly (Angourie Rice), the 13-year-old daughter of "worst detective ever" Holland (Ryan Gosling), who was widowed sometime in the near past by his inability to smell and general sloth. His failings are physical and moral. They're what lend pathos to a moment late in the film when he truly laments a "pinkie swear" he gives his daughter. Holland's trying to address his moral failing. (The little girls in Black's films, such as The Last Boy Scout (which he scripted), remind most of MacDonald's broken heroines and of "Delly" from Arthur Penn's Night Moves.) Holland's also a fall-down alcoholic with an ad in the phonebook designed primarily to lure old people who are trying to find dead relatives or, because it's Southern California in 1977, nieces and granddaughters sucked into the booming porn fandango. Holly is the picture's moral and deductive centre, functioning a lot like Penny from the "Inspector Gadget" cartoons. In her key moment, she asks Holland's reluctant partner and muscle Jackson Healy (Russell Crowe) if he in fact murdered someone who died earlier. He lies. "Good," she says, "I knew you could never do something like that." When she says it, you believe her.

It's a great moment in a great film, introducing the idea that the title is not just a wry description of its not-particularly-nice heroes, but also invitation to consider what it means to be "nice" and how in the end maybe it doesn't have any particular meaning at all. Black begins with an interesting gag where a little boy gawps at a nudie-mag centrefold featuring porn star Misty Mountains (Murielle Telio). A car then crashes through his house, ejecting Misty Mountains, in her centrefold pose, onto the rocks below. The boy puts a shirt over her. Black establishes within minutes that his film is violent, sexy, and moral--that the violence and sex will be carefully choreographed but that morality is innate and carried most brightly by the innocent, it's true, but innate all the same, even in the worst of us. It's Rousseau's theory of Man, complete with the idea that Man is inherently good but needs help from society to develop, which is too bad because society only fucks things up. At the end of it all, in a resolution not quite bleak enough to fit the 1970s but still plenty grim, Healy falls off his carefully-attended wagon. "Yes, but at least you're drinking again!" says functional alcoholic Holland, and they clink glasses. It's the start of a beautiful friendship, and the more painkillers and altered perceptions to grease the way, the better.

The Nice Guys clarifies, too, what it is about Los Angeles that makes it so ripe for films noir. As the "City of Angels" harbouring notorious gluts of moral shadow, it has that hip irony going for it--and as a desert plain built on a fault line, it's essentially an alien landscape where people weren't ever supposed to live. I love the introduction of place here: Black pans up from behind the "Hollywood" sign, rotted and falling apart up there. If Rousseau is about the primacy of Nature (Romanticism), Los Angeles is the rejection of that. Black populates the periphery of the frame with lost folks and empty, circular conversations. Meanwhile, a bartender tries to get the guys to give up their mission (ostensibly to protect another young woman (Margaret Qualley), daughter of their client (Kim Basinger)) because it's too scary, and a porn actress tries to get Healy to watch her work with the promise that the "anal" is coming up. All of it reflects the futility of staying on task; the picture's lack of focus, seen as a detriment by some, is actually itself canny commentary on the MacGuffin. Appropriately, the MacGuffin of the piece, a reel of film not entirely unlike the microfilm that anchors North by Northwest to nothing at all, is more effective as auto-critique: The Nice Guys as a found object constructed of a multitude of other objects. The Nice Guys and Kiss Kiss Bang Bang are like the Scream of a certain period's post-Chandler, post-Hammett bungalow mystery ethos. At the end of the great one-liners, the fantastic visual jokes, the drummer's master timing and the beat you can (and should) dance to, at the end of all that, The Nice Guys suggests that men need help to be Men. A lot of it. Now imagine Robert Mitchum saying that.